Farting around in HD.

I've been farting around with the gopro a bit, heres the results. I'd have done more but I've got the fucking cold. Shite.

No well timelapse. from yodagoat on Vimeo.
I should have some bike videos soon.
Posted by Mike at 7:33 PM 2 comments:

I've let my wee blog go a bit recently, so its time for an update on whats been going on in Mikeworld. A fair few things have happened with the bikes and me.
First up, the C90. Its just ran out of MOT, but apart from that its in great nick. Liam figured out a way to fix the indicators so they no longer hang of the side of the bike. I'll get it MOT's over the next few days. 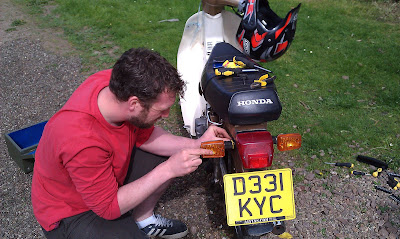 I've serviced the GS, got a new set of tyres fitted and even managed a night away camping at Rothiemurchus on my way up to Di's wedding, where HB was a bridesmaid. There's an ace wee cafe down Lybster harbour called waterlines, where I had my first taste of pea and apple curry soup. It sound fucking bogging but it was pretty tasty. While I was up there I did a spot of geocaching (sad cunt, I know) and found a cool wee cave that someone had built house style front to it. I dunno if anyone ever lived there or what it was used for, but the access to it involves sliding down a cliff on your arse. This left me shaking like a shitting dog as I'm fucking petrified of heights. 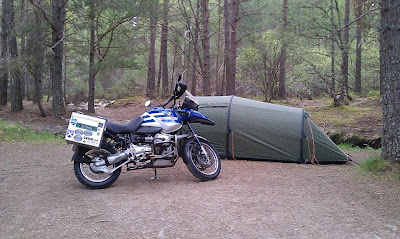 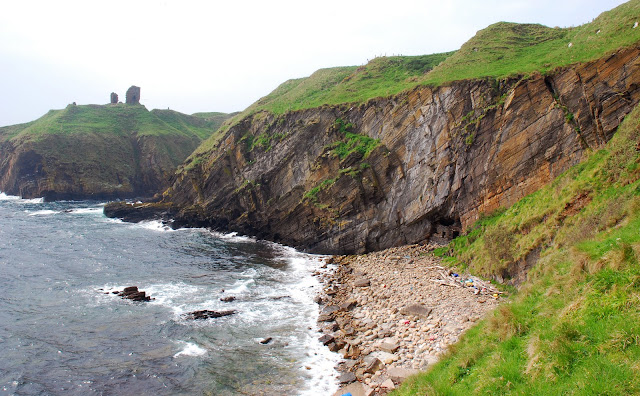 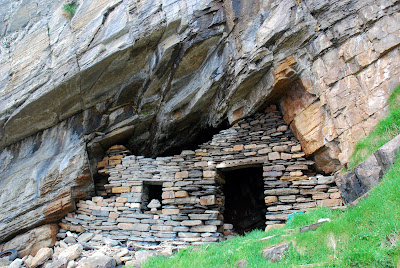 Last weekend I hit the big 3 0. I'm 30. That's pretty much middle aged. Turning 30 was pretty fucking sweet though cos HB got me a Gopro HD camera. I can mount it to nearly everything so there should be loads of HD Mikeworld videos spewing on to youtube to bore the world to tears. Fucking champion!
For my birthday HB, a few friends and myself took a trip to Applecross. HB and I stayed in one of the wigwams, which is a wooden hut thingy complete with power, heating, lighting and even wee mattress things. We took the car up (with the push bikes on the back) for the first time which turned out to be a good decision as most of the time the weather was unusually shite. On the day of my 30th it was pishing doon with rain but we still managed to get out for a wee cycle before heading to the legendary Applecross Inn for some awesome food and drink.And some Ninja Blood, and amazing drinking experience originally from Wick. You never know how pissed you are and Ninja Blood gives people amazing energy levels. I even managed to get out on the pushbike for a cycle when the weather brightened up, all be it being at 6 am when I was pished out my heid. Still, the photos turned out not too bad.
The drive home was epic. Seriously strong winds were fucking up most peoples travel plans, especially the waterfall beside the Bealach Na Ba which was being blown back up the hill! On the way home we seen quite a few trucks that had been blown on to their sides and trees that had been blown over, hopefully no one was hurt.

(these videos are fucking boring btw)
The bikes took quite a battering on the back of the bike, and unfortunately theres now a gouge out my fork stanchions. I've read on the internet that this can be filled using nail polish and really fine wet and dry, but the guy I phoned from rockshox and the guy from TFtuning said not to worry, just monitor the fork seals, but I'm still fucking spewing. My bottom bracket has packed in too so there is a new one winging its way to me as I write this. Fucking bikes.
Still, the way home took us past the Waterside Cafe in Lochcarron which allowed us to stop in for the famous challenge breakfast.
If you finish the breakfast you get a certificate. This would have been my third certificate and Ferg's second but they only had one certificate left, so we let Jason have it.
I'll be making an effort to post more shit on here in the future, especially now I have the Gopro. I've got a few ideas for videos involving the GS, C90 and the pushbike so watch this space, and if you have any ideas for a video give me a shout.

Oh and here's the genuine Wick recipe for Ninja Blood
Colour varies with amounts of orange juice/blue bols. Usually has the same effect though. 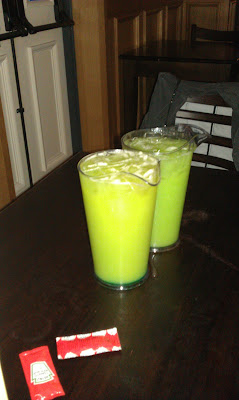