I've been down to Glentress a couple of times over the past week. Last Sunday it was Woody's birthday so a bunch of us went down for a play about. HB came down with us for her first go at Glentress, and even though she had a couple of crashes she did well and we'll be heading down again soon. It was Bennetts first time at Glentress too, he only had one crash but it was quite a dull one, crashing while on a black graded skinny log that crosses a ditch. Ooya! As always I took the Gopro. Here's the film.
Woody got the new Magicshites for his birthday and has been desperate for a night cycle around Glentress. So he borrowed his missus dad's camper van and we headed down with Big G. We had a good shot on the red run, belting down spooky wood and the rest. Woody got a puncture at magic mushroom, then G broke his chain. So after a bit of a walk we got back to the vans and put the lights on the bikes. We headed out to do some of the blue run, all was going well but then I burst my seatpost right at the bottom of the trails. After a long push back up we got the barbecue/firepit fired up and had a couple of beers before a few runs down berm baby berm. There was a bunch of mad bastards flying down the trails, quite a show in the dark. The gopro didn't work too well in the dark, but hopefully that will improve when I get a light on my lid. My seat wasn't completely fucked so I managed a couple of runs before we stopped for more beers before kipping down in the camper van. The next day we cooked a rake of meat the belted down the blue to the bottom then headed home. A quality night oot. 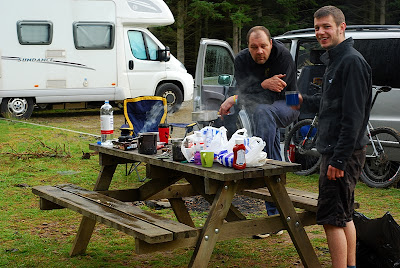 All this sick ass extreme shit has had a negative effect on my hand. Its STILL sore from that crash a few weeks back so I might have to go back to the docs. Hopefully it'll get better soon cos we've got a wee camping trip planned on the GS......
Posted by Mike at 1:08 AM 4 comments:

Mair bike photos.
Is this like an evening looking at someones holiday slideshow?

These are all taken up the Lammermuir hills, close to where I live. My off road riding skills are pretty limited, and my arse was going like a rabbit's nose riding the middle of those rutted bits. The GS is pretty good on open, land rover tracks, but its a big, heavy and expensive bike to be chucking down a hill. So for real off roading I'd go for a more dedicated bike. Like the guy below.

Faithir took this photo of the Massif on the pier at Achiltibuie. 2007

My fat puss ruining the view of Stelvio.

The other side of Stelvio.

Doing my laundry in Slovenia. 2007

This last bunch were all taken on the Winton Massif 2010 Scotland tour which included the Outer Hebrides. These pictures are from Barra, one of the more southern of the islands. The beach with the plane on it is the Airport, the beach is the runway! While we were over there we rode down over the causeway to Vatersay to see the crashed Catalinia. It crashed during WW2 and is a war grave.

My GS and Fers's XT outside Dunard Hostel, Barra.

The Winton Massif at Gills Bay waiting for the ferry to Orkney. This was where we met out German member, Wolfgang.

Big Wolfgang and his GS.

Ok, I've had a request for more bike stuff on here. Now I have thousands, and I mean fucking THOUSANDS of photos of my bike in various locations, and some of older bikes and other folks bikes. Some will be old and some will be new. So if this gets boring, blame Roger.

One from back in the day. Here's me handing the helmet over to Pete while test riding Wylie's RD125LC that Pete had got going. I got 96mph out that bike! (on a closed road obviously)
Check out my hair.

One of GHC's auld bikes and my GS in East Lothian.

My GS and Stac Pollaidh, from my first proper trip away on the GS. 2006

At the Churchill Barriers, Orkney. 2009

The Winton Massif in The Bayview, Lybster. 2010

WW2 anti tank blocks in East Lothian.
There will be more.
As I said, blame Roger.
Posted by Mike at 2:12 AM 4 comments:


Its been just over a year since I got my push bike and put this post up. The whole point of getting my push bike was to get myself fit, while still having fun.
So has it worked?

﻿ ﻿ I think it has! I'm really enjoying the cycling, My On One 456 has had loads of use, some of it quite expensively. I've made some new friends and spent alot more time exploring East Lothian, where I live. Last year I went on a cycle round the coast organised by my mate Bruce. It was good fun but I was totally fucked afterwards. This year however I was fine, keeping up easily, not blowing out my arse. I managed to get up Gullane hill too, a first for me.

Like last year we met up in Longniddrie railway station carpark. I rode down with Paul and Gary Extreme, we weer a bit late turning up as we managed to get a bit lost on the way doon. We pretty much followed the same route as last year, heading out around the nature reserve but skipping Gosford estate this time for political reasons.

Bruce in his natural habitat.

﻿ ﻿ We stopped at a beach and Gary B, Jason and Bruce gave folk a shot of their Pugsleys on the sand. I can't wait to get mine going. All was going well till I went pinging over the bars while following Jason along some singletrack, keep an eye out for it on the video at the bottom. It wasn't that sore when I crashed, but my hand got sorer as we rode out of the nature reserve.We still stopped off for a bite to eat at the Gosford Bothy, which supplied us with the usual high standard of food. I had an ace chocolate brownie and shovelled a bacon and black pudding roll into my face. The rest of the group headed off back to Longniddrie along some more trails, but I had to head back on the road as my hand was totally fucked, I couldn't pull up on the bars or anything, so I just met up with everyone after for a pint or eight at the Longniddrie Inn. That was last Sunday and my hand is still pretty sore as I write this, so I must have sprained it or something. Anyway, the beers helped.

Here's the video, lookout for my crash.﻿