I've been reading about Honda's new incarnation of the Africa Twin for a while. There has been loads of speculation about what it will and wont be by loads of different riders. On my part I thought it would have a similar build to an XT660 but with the bigger 1000cc engine. Well a couple of weeks back I heard that Two Wheels, my local Honda dealer had one in, so Faithir and I went up for a look. The bike was out on test when we arrived but we did bump into Smillie. he'd came up to see the Africa Twin too.
After a while the bike pulled up and I went out to see it. I was surprised. It looked much better than I had thought it would. The brakes and suspension looked good quality and even in the low light and covered in road grime the bike looked well finished. I had a seat on it as Faithir and Smillie wandered out for a look. picking it up the bike felt light in comparison to my GS. Really light. The riding position felt good and we experimented by taking each other pillion. Again the bike felt good with plenty room. Ok. I'll arrange a test ride. 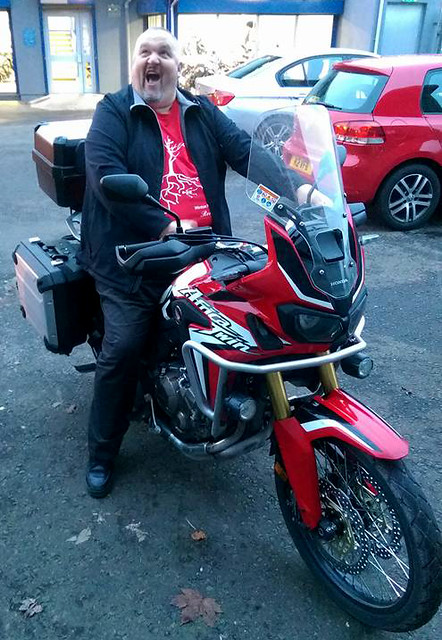 Smillie enjoys his seat on the new Honda.

My test ride was for a week or so after we'd first seen the bike. I spent the week reading other people opinions on the bike, especially those who compared it to the GS. There was a fair few folk saying how the bike is underpowered, it may feel light but it's no feather weight. Full of fluids the bike weighs in at about 230 kilos. With "only" 94bhp folk were concerned.
I rode up on my GS so I could compare them back to back. Starting up the Africa Twin there s a wee bark, the bike sounds OK but not amazing. I pull away from the shop noticing the low down grunt, the bike pulls from fuck all and that light weight drops even lower when the bikes moving. Carving through Edinburgh's traffic and road works was a piece of piss. I headed off down the coast. First thing to test was the bikes motorway abilities. Here's where the surprises start coming again. Fist up, the bike has plenty grunt. It pulls to illegal speeds easily and will happily cruise there. The wind protection is better than the GS Adventure I'd ridden up there. Now the Africa Twin I was riding was fitted with the optional high screen, but still, better protection than a BMW GS Adventure? You better believe it. 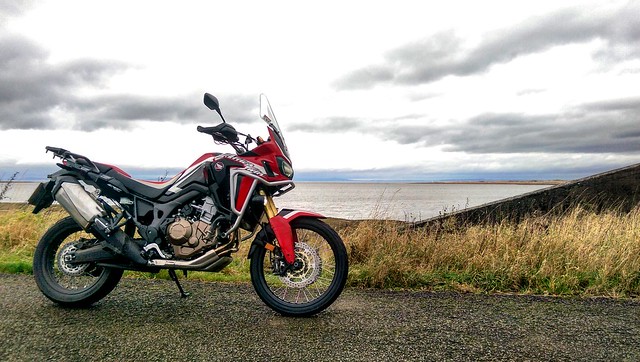 Next was the twisty bit. Here I though the suspension would easily be pushed into a wallowy mess but no, how wrong I was. The bike feels really chuckable and lively. Get your weight over the front a bit and you can have great fun. With my bulk on board the bike did dive a fair bit under hard breaking but everything remained composed and you can dial your own settings into the fully adjustable Showa suspension. Another surprise was the Dunlop TR91 tyres that the bike comes with. I've never been the biggest Dunlop fan but these thing are great, giving plenty feedback the more confident I got on the bike.
Wow, so this underpowered, boring Honda has plenty grunt, handles well and is great fun to ride...
I didn't see that coming. i though it was going to be OK, but just OK. Could I chop my GS in for one? 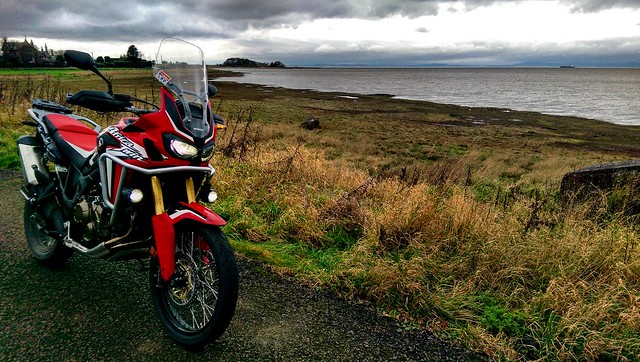 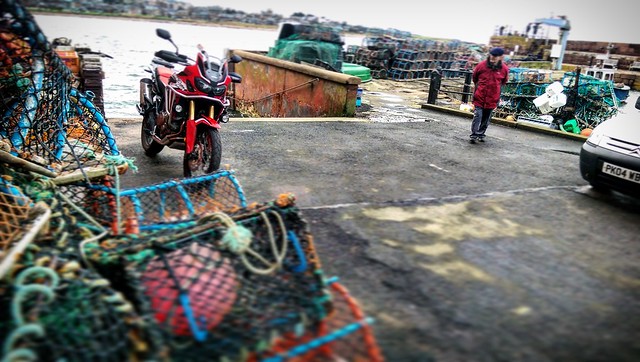 People admire the Africa Twin, its a much bonnier bike than the GS, even in red. 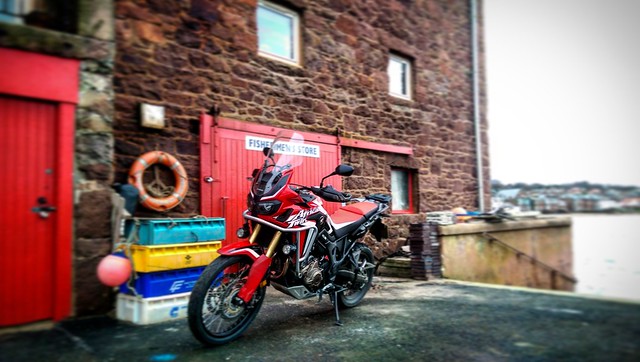 I weighed this up as I rode back to Two Wheels. The GS will be a better bike two up. Saying that I only really ride with a pillion a few times a year, and it felt ok when we were mucking about in the car park a few days before. Apart from the pillion issue I couldn't see any downside to the Africa Twin sure its got a chain drive and no where near the amount of gadgets that were on the GS but I was seeing this as more of a positive than a negative. More and more I've been having this impeding sense of doom about the GS's reliability and build quality. I'm hearing of more and more people who are left with huge bills after their final drive has gone, or an oil seal has blown and contaminated the clutch, or there's catastrophic engine failure, or that daft exhaust flap has gone.... the list goes on. BMW have an absolutely amazing warranty and dealer back up, the worrying part is how many people can share their good experiences. How many folk have told you about their Honda breaking down? Sure, I'd have to lube and adjust the chain but that's not rocket science. I'd no longer have the luxury of setting my preload or damping on the suspension with a push of a button. Hardly a hardship, and considering how much cheaper the Africa Twin is than the current GS I'm sure it's something anyone could learn to live with.
Riding home the BMW felt slightly dead after the Honda. Don't get me wrong, the BMW GS is a great bike but does come at a large price.
I've been on a GS for over ten years, could I live without the farkles of BMW and ride an Africa Twin?
Well I fucking hope so, I've traded the GSA in. I'll get my Honda in a few weeks!! 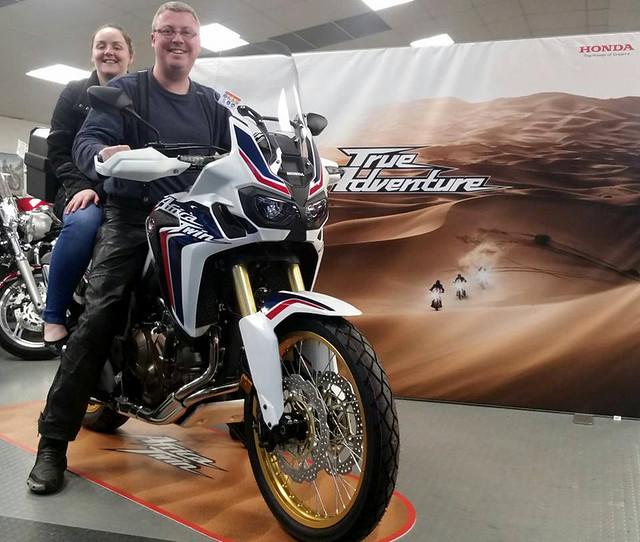