There's something weird happening in the motorcycle world. People are beginning to really believe the bullshit when it comes to the marketing side of things. This is never truer than in the daft "adventure bike" class. What was once called "touring" is now called "adventure riding". Big traillies have been renamed "duel sport" which in turn became "adventure bikes." Great travel bikes such as the BMW GS/Africa Twin/Super Tenere/etc/etc are now getting called dirt bikes and there's more and more people buying these bike, giving them a CR250's pasting then getting upset when their 250kg bike breaks.  "But it's a dirt bike, it was designed to go over that huge jump!"
Aye mate, sure it was. 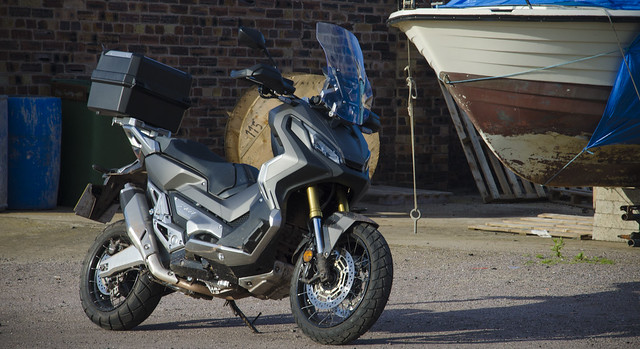 This brings me to Honda's new maxi scooter. I was given a shot of the bike for a couple of days while my bike was in for a service. I'll be honest, when the scooter was first released I laughed. Some marketing genius in Honda had named it the X-ADV, clearly cashing in on the current Adventure fashion. I mean, no one would be convinced that it was an off road bike just because it had ADV written on it, would they?

Putting my prejudices to one side I took the key. Which isn't actually a key. The X ADV is keyless, so you only have to have the fob thing in your pocket. As long as you have it within the proximity of the bike you can open the fuel cap and lift the seat to access the big storage area beneath with a push of a button.
The X ADV has the same parallel twin engine and DCT gearbox as the NC750X. I was surprised how good it sounded when I fired it up. There was the normal clunk when I put it into "drive" and off I went. 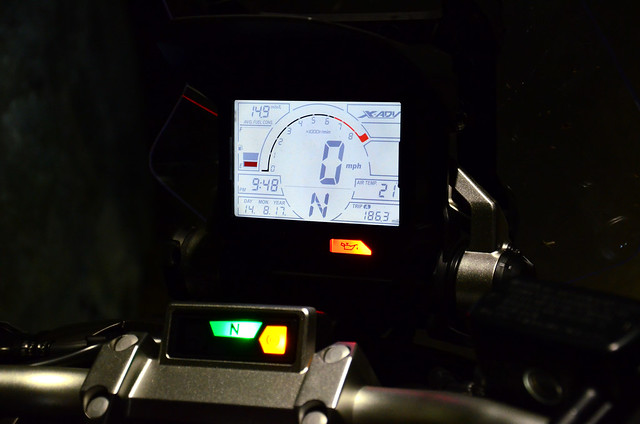 Now, reviewing bikes isn't really my strong point, I'm easily pleased. I mean, a shite bike is still better than no bike surely? My initial thoughts were "This is good!" But it really was! The X ADV has a good turn of speed about it and the DCT box is smooth as. The handling is spot on and the brakes strong as they need to be. It was a bit weird chucking the big scooter about with nothing for my legs to hold on to. The DCT box has three "sports" modes, one holding a gear longer than the last. I liked the regular drive mode and the first sports mode. You can also change gear playstation style with a trigger/thumb switch. I used this a couple of times but preferred the automatic modes to be honest. For me, the bike doing all the clutch work took the satisfaction away from manual shifting.
All these modes are displayed with all the other relevant info you'd want on a fancy digital screen.
I gave Bob a lift on the back, there's plenty room for a pillion and the bike handles an extra person fine. The young team even complimented the X ADV's looks, although I doubt any Fireblades will be getting traded in any time soon. 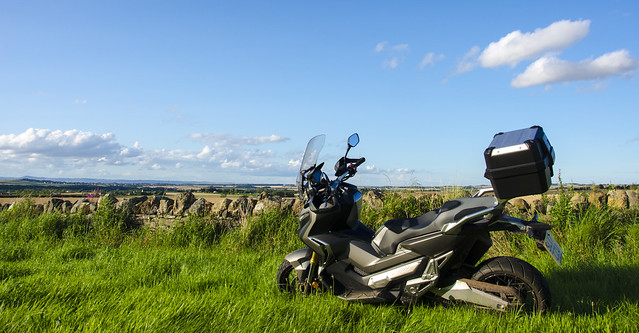 So all in all, it's a well specced, practical, good fun, big scoot that's priced with the competition. Honda are saying:
"The X-ADV’s agility makes light work of the everyday ride through town traffic; come the weekend, you can set your sights much further afield."
But the internet is already filling up with bizarre videos of folk standing up while riding the maxi scooter along a smooth dirt road and "X ADV off road!!!!" reviews. It's a maxi scooter, not a dirt bike. Never mind off road, if you take the X ADV along a rough dirt road there's a high chance something will break, especially if you drop it. If you want a dirt bike get a KTM 250 ECX. Think of the X ADV as a commuter that'll take you down that bumpy road to the beach at the weekend. 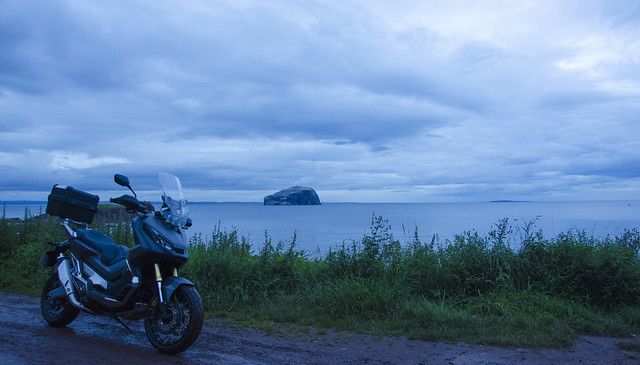 I know, I know, It's been ages since I've posted anything up, but this time its due to being busy rather than lazy! I've got loads of stuff to write up. I've got a bunch of stuff that I've been reviewing, I've done a few trips and I've done my first trip with Passing Places Tours with two more booked up! Happy days!
Back in April Ferg had an idea for a bike trip. Quite a few of us in the Massif are now lucky enough to have more than one bike. Ferg wanted to do an "Auld bike run," taking our older bikes, rather than our usual steeds. It was a four night trip, two night s at a Hostel in Flodigarry on Skye, and two nights at Tobermory hostel on Mull. Due to work commitments I could only make it to Mull. My Kawasaki ZZR had just went over the 100000 mile mark, completing Mission ZZR, so I chose to take that. Ferg took his old XT which he'd just recently put back on the road. Yachtmaster Coastal (Ferg's Dad) Took his BMW R80, Mikey Sunter took his XT660 Tenere,  Snake was on his Harley, Fairthir and Chris Jones only done the Mull part as well, Faithir on his old BMW R100GSPD and Chris on his 1200GSA, having had some trouble with his old bike. We were also joined by newcomer Tex, on his BMW R100RT. 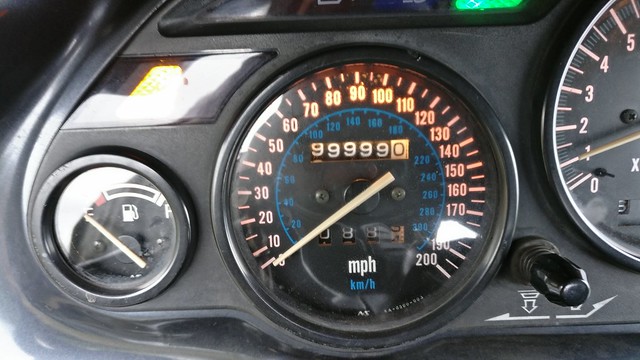 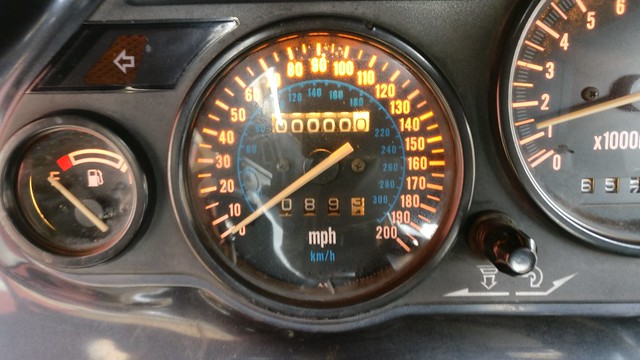 Will it need run in again?

Faithir and Chris had left earlier in the day, so I had a wet solo run past the Kelpies which thankfully dried up over Rannoch Moor. Chris was only up from England for the one night, so it made sense for them to get away eary and make the most of the day.
The big Zed was running great for a bike that had went round the clock, the fairing was giving pretty good protection from the wind too. There was still a dusting of snow on the hills, giving a touch more drama to the usual stunning scenery, the A82 running relatively quiet before the summertime surge of tourist buses, campervans and caravans. 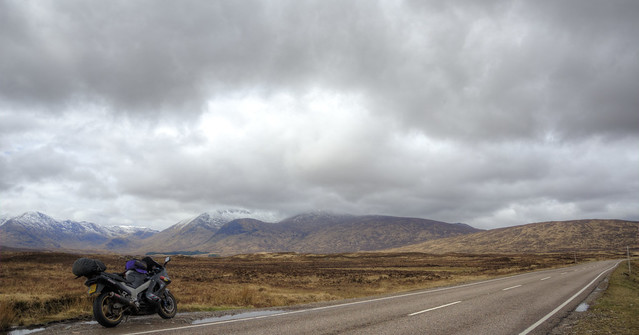 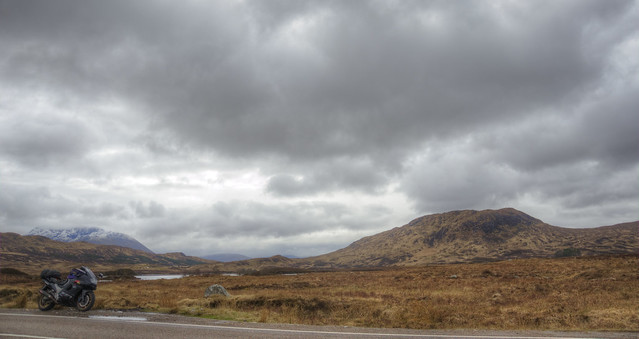 Two minutes on the Corran ferry got me to Ardgour. I had planned on riding to Lochaline along the coast road round by Kilmalieu, but with the weather closing in I really couldn't be arsed getting soaked, I'd have seen fuck all in the mist anyway. Instead I nipped into visit my mate Tim at Sunart Camping, ADV Scotland, I think that's who it was anyway, were having a rally there so I nipped into say hello to anyone left, and scrounge a brew from Tim. I was blabbering away went I suddenly realised the time, or rather that I didn't know what time it was.
"Shite, what time is it Tim?"
"Half three."
"Fuck sake!!"
I had only 30 minutes to get to Lochaline. It's only about 20 miles, but that was along, wet, greasy sheep and deer filled singletrack roads. Even Google maps says it'll take 55 minutes....
The ZZR may be 24 years old, but it's still very, very fast. And with the 4 into 1 on it, very very loud. I was screaming along the road, the loud pipe warning all the sheep, and everyone else within a 5 mile radius. There must have been one deaf sheep kicking about, because the wooly daft bastard wandered right out in front of me, casually sidestepping as I went past with the front locked up.
I made it on the ferry with about ten seconds to spare. Braw. 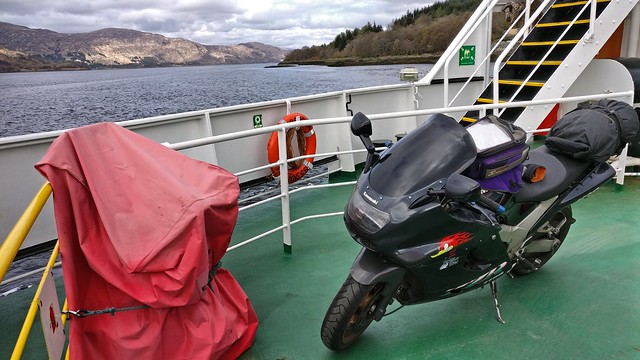 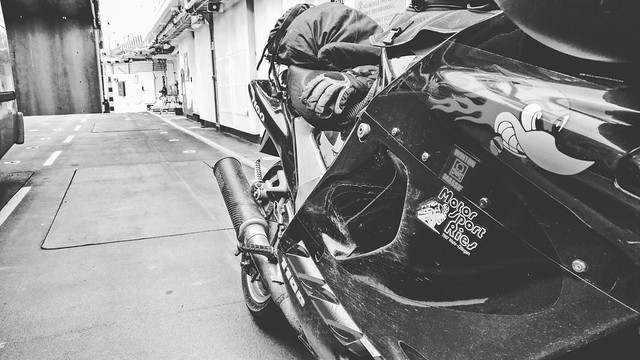 The guys were all hanging around outside the hostel when I rolled into Tobermory. We were all staying there except Snake, Tex and Mikey, who were up in the campsite. Bike chat ensued, as well as the usual slagging and other craic. The evening was spent out in Tobermory, where Tex's short temper earned him his nickname. We had told him we were calling him Tex because of his cowboy style mustache, but it was really short for Semtex. 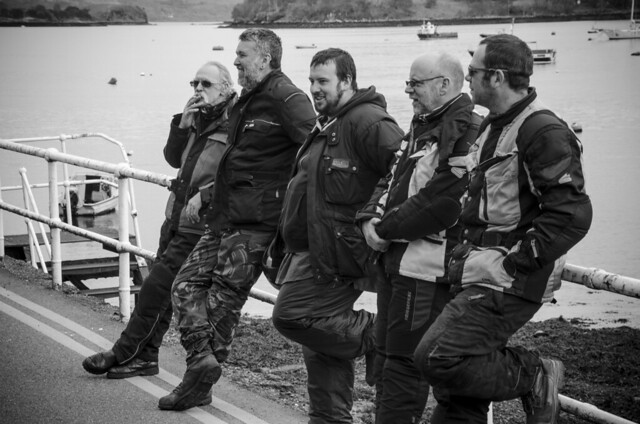 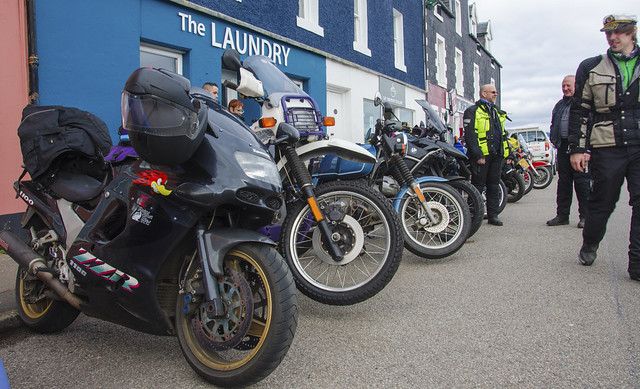 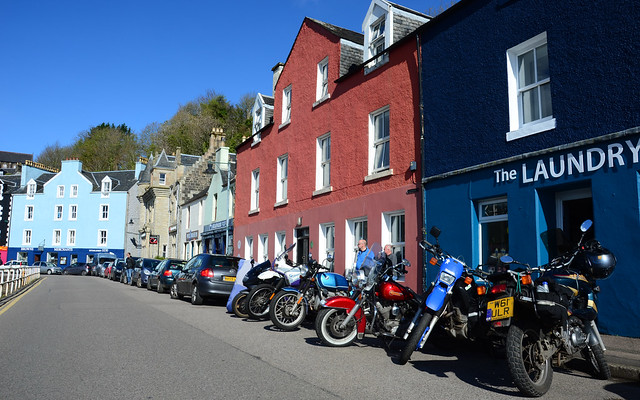 Everyone did their own thing for a bit the following day, we had to say our goodbyes to Chris, as he was heading home. Mull is one of my favorite islands. I spend the following day having a run around Mull's north coast with Yachtmaster and Faithir. The ZZR was pretty hard work on the bumpy, gravel strewn roads compared to my last visit on the Africa Twin. The scenery was as stunning as always though and I really enjoyed crashing about the place on the old Kawasaki. The sun was out making the April afternoon feel almost summery. We even caught a glimpse of some Sea Eagles. 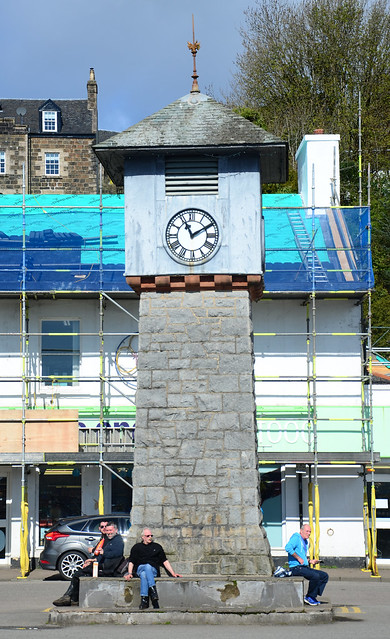 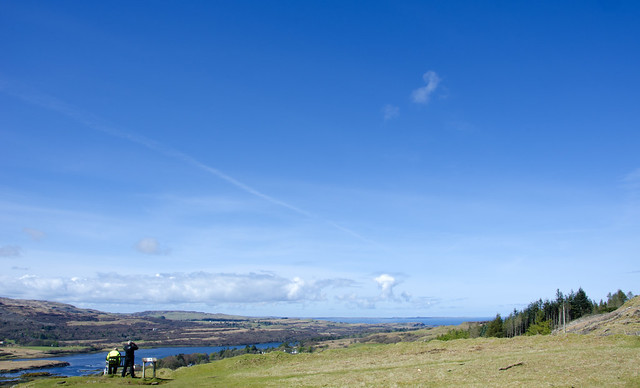 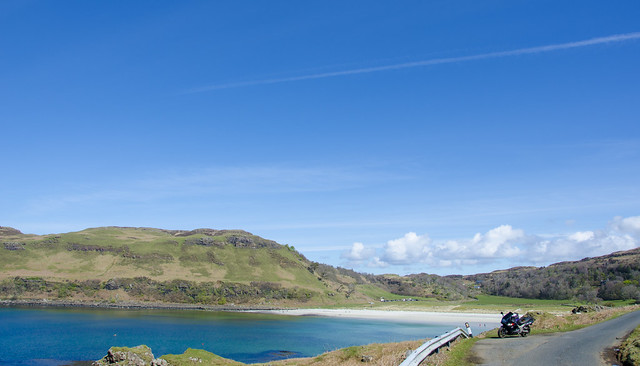 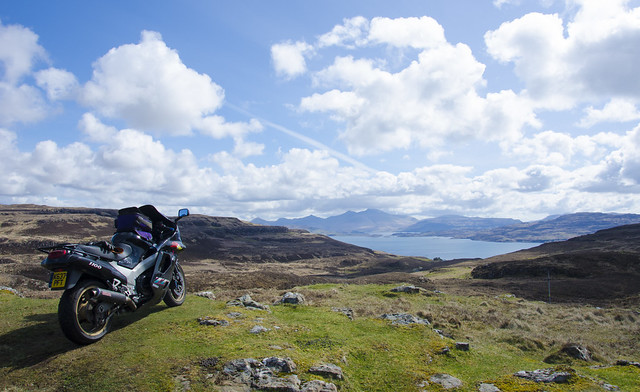 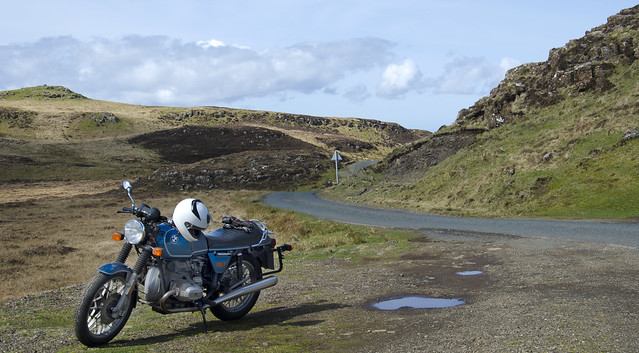 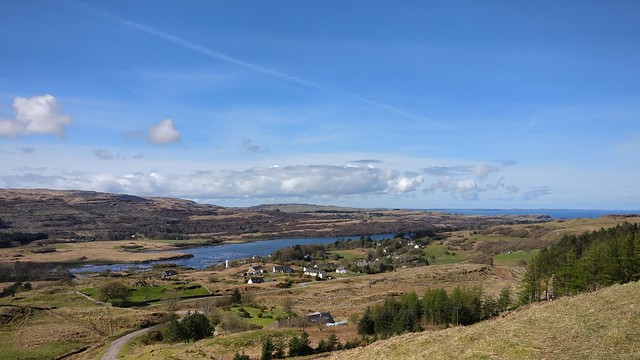 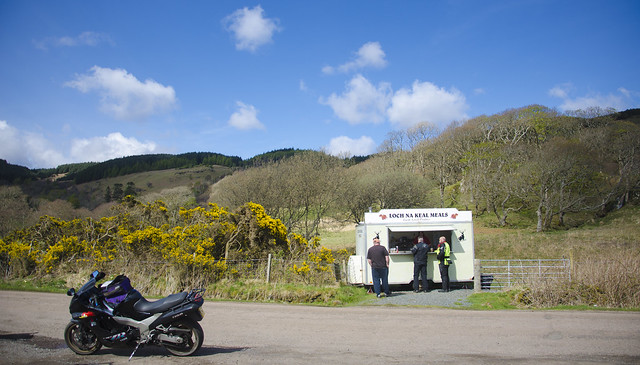 A chippy was bought from the van at the harbour followed by another nice night out in the Mishnish. Even Tex had calmed down. Fergus had come up with some bizarre formula where everyone's bike was rated to see what was the best Auld Bike of the Auld Bike Trip. His formula turned out to be a load of shite, so we put it to a vote, Faithir's R100 GS PD winning. The tasteless buffoons had rated the ZZR way down the list!! 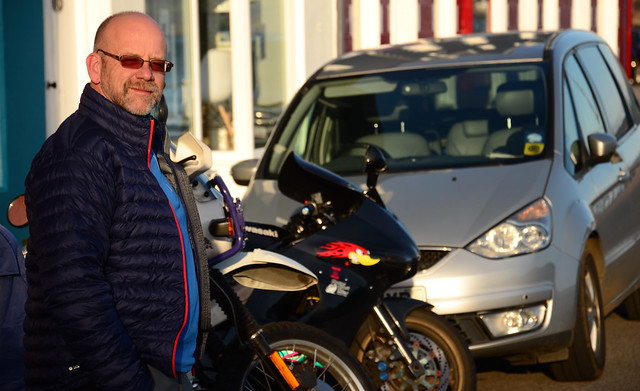 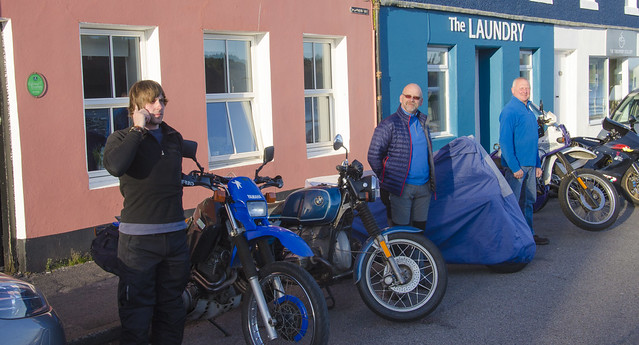 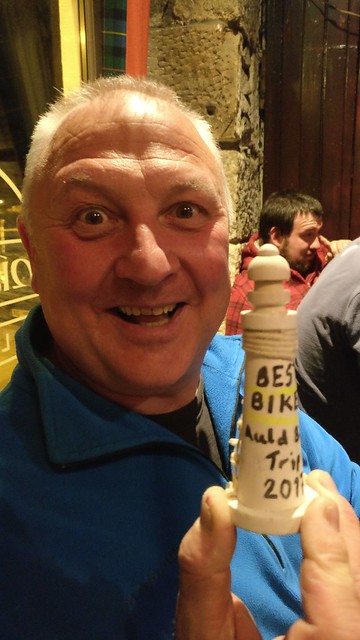 An easy run home via the ferry raised a question in my head. I'd achieved what I'd set out to do with the ZZR. It had been round the clock and I'd done a wee trip on it. I really needed the space and Rick always said to give him first dibs to buy it back, which is exactly what he done! I'm happy to say it got him back to Germany with no dramas.
Maybe I'll buy it back once he's done another 90000 miles on it. 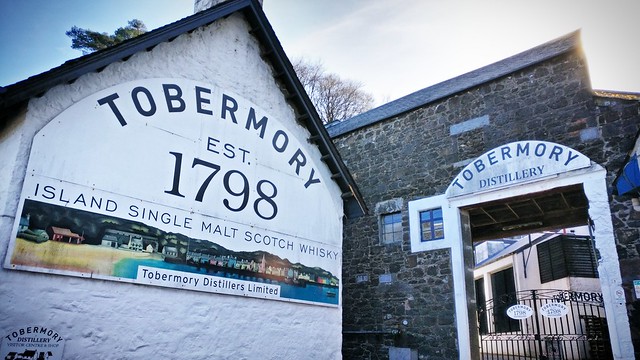 Fancy coming on a tour with Mike? Have a look at www.passingplacestours.com and give him a shout.