A couple of weeks back it was the Scottish Bike show. I haven't been in a couple of years so it was good to have a look about all the new bikes. The stunt show was cancelled due to snow, but it was way to cold to stand around watching some poor cold bastard fly around doing wheelies and stuff. We spoke to the folk on the BMW stand who tried to persuade me to buy a new GS and Dakar legend Simon Pavey got his photo taken with me and shot the shit for a while. 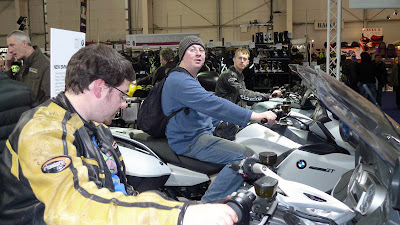 I took quite a few photos, mostly in the custom and classic hall, so here they are.

An old Douglas like the one my Uncle Greaser had.﻿

This is Bobby from my local pub's old Enfield. Nice eh?

Parsons loves a good classic.
I've also managed to get the GS out for a wee spin. My mate Lynchie had quite a bad accident on his bike a wee while back so it was good to get out for a run with him and Faithir. We even met up with GHC at the BMW shop in Dalkeith, and Lynchie treated everyone to a roll at the legendary Continental Cafe.
When we got back I got to take two different BM 800s out. 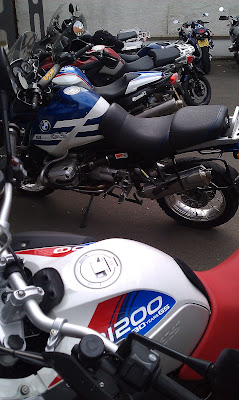 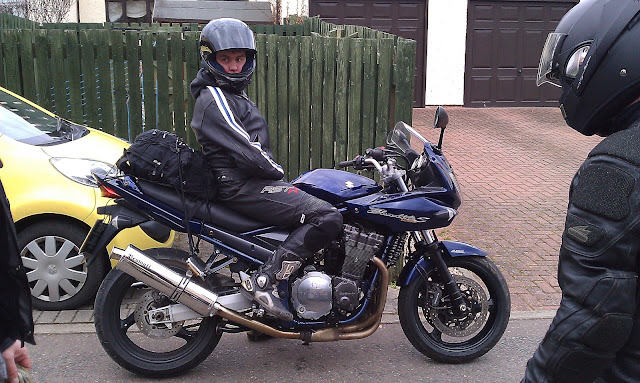 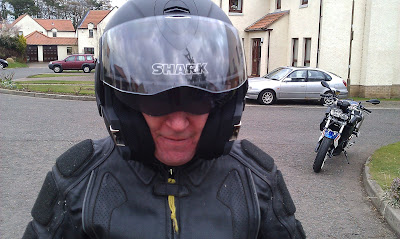 GHC's bike (800 one) was my first proper go of the F800. Its a good wee motor, pulls well and is pretty nippy when you give it the berries. Faithirs bike (800 two) feels like a wee bike with a bath stuck to the front. It handles pretty good though, and its for sale if anyone wants a bike that will keep all the bad weather off you, the fairing really is that big. Its like a fucking barn door! 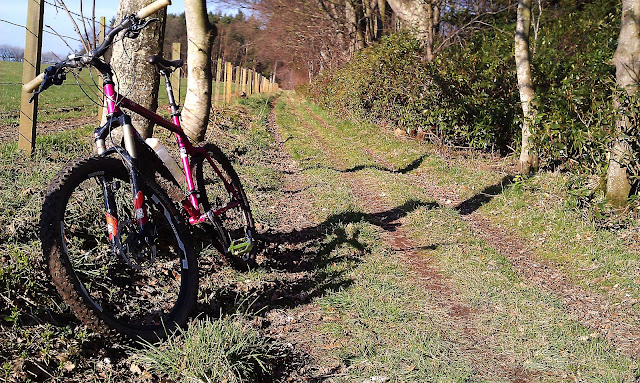 I'm still trying to keep healthy too but I've only managed to get out on the push bike a couple of times in the past couple of weeks. The good thing is that it looks like the good weather is finally arriving. I was out the other day and managed to ride about without getting covered in shit as the trails are beginning to dry out. I was fair enjoying myself and I decided to explore some bits of the woods over the other side of the river that I hadn't been in before. I fell in the river, then fifteen minutes later, fucko! I got a flat tyre from riding into a jaggy bush. Being the Ray-Mears-prepared-for-anything type person that I am, I left my pump and puncture repair kit in the kitchen, so its was a nice walk out for me.
Still, the cycling allows me to occasionally enjoy a chicken kebab from Dino's in Haddington. These are undoubtedly the best chicken kebabs in East Lothian. go and try one. You can get a small kebab with a wee scoop of chips for a fiver!
Mind and say that they were recommended by Mike though.
The "no go" bit of this post refers to the C90. I'm still using it for most of my commuting but the other day it started to run funny and didn't seem to have much compression when I kicked it over. It had felt like this before and it had turned out to be the exhaust valve tappet, which had tightened up, preventing the valve from closing. I checked the valves clearances and sure enough, the tappets were tight. Could I get the clearance right? Could I fuck. Every time I tried it out they were clattering like a jakeys rucksack. Eventually I got it right but what a shop front of a job to do. It was fucking easy last time!
So now I need to try and find a rack for it and try and figure out my MPG and tank range. The wee 90 might be going on a road trip.﻿
Posted by Mike at 1:06 AM 4 comments:

The C90 is pretty much the cheapest form of motorised transport. Its well cheaper than the bus and mine can hit 50mph with no real problems, or hills. So I'm planning on using it as much as possible as my everyday wheels. It will need a rack to carry stuff but untill I get one sorted I'll stick to using my rucksack. I've been unable to find one on the 'bay and nothing has turned up on C90Club but I think I know someone who can knock something together.
The way I see it, the benefits of using the C90 as my everyday transport are.

So as you can see, the good out weighs the bad.
As a wee trial I've used the C90 for work for my last set of shifts. I was on nightshift. It wasn't warm. 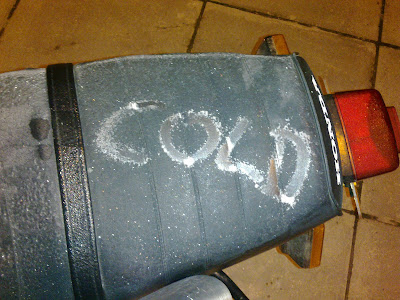 I've still been using the C90 for fun too, me and Morton went for a wee crawl up the hills where they were burning the heather which gave us crazy smoke to ride through. There were a few other trails that we tried to ride, but they were super steep. We were both of pushing with the bikes in first gear wheelspinning away. Quality fun. 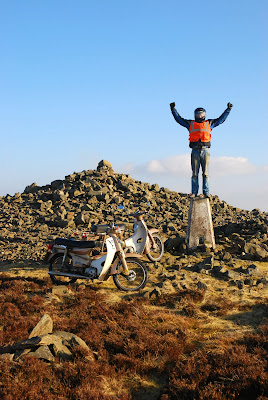 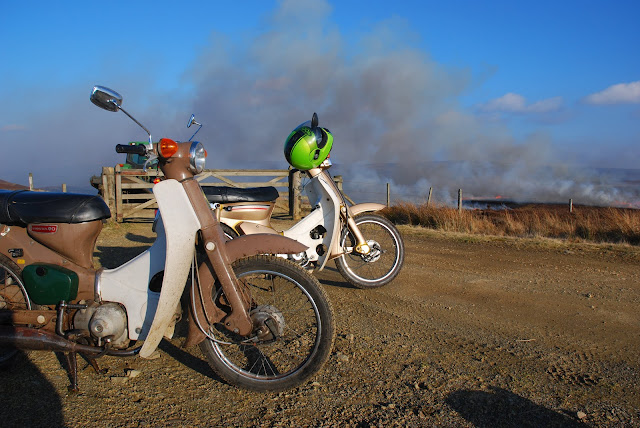 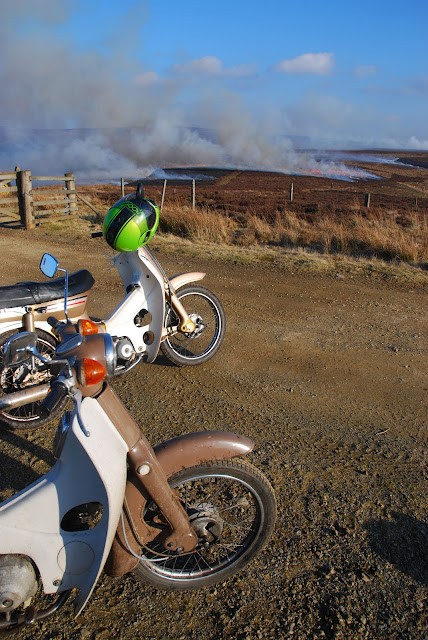 Morton in the smoke. 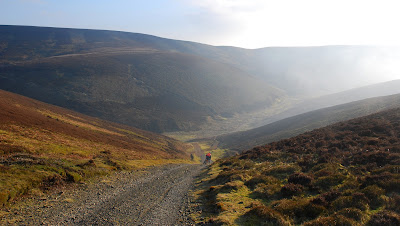 Aye, today was a good day.
Woke up late and ate cereal and toast in front of Top Gear while Jake was out causing havoc, then it was out to the back roads on the C90.
Met up with Faithir who insisted in getting his photo taken before heading out for a wee adventure.

And then he opted for a real bike!

I had a wee spin on Faithir's GS. It feels much more refined than mine. It pulls from fuck all revs in higher gears and the stock exhaust sounds ace with the loud valve, but I wouldn't chop my GS in for one quite yet. Its still a pretty similar (and fucking good) riding experience, but I'll be sticking with my tractor for a while yet.
Anyway, I carried on on my travels. It got pretty fucking cold, my face and hands went numb at one point. I couldn't feel my nose running, or wipe it away. Tasty!

After taking Faithir's photo we went to Dave's for a brew then headed back out, going our own ways. I headed back to the hills via Peaston.

Regular followers may recognise the boiler in that last photo. I assume its had something to do with the railways but I'm sure my mate Bruce can shine a light on it purpose.
I carried on. It was a wee bit cold but nice and sunny and I think I ended up in someone's garden, but what a view they have.