Friday was a hectic one. Ben and myself had planned a one nighter away somewhere but my bike was in dire need of a back tyre and the wheel was in Motorrad getting a new tyre on. So it was a mad rush to get the collect the wheel with its lovely new Tourance fitted, get home, fit the wheel and get the bike packed. After loads of rushing around and learning that you don't have to remove the rear calliper to get the back wheel off like you had to on the old 1150, we were ready to go. Our destination was The Balloch O'Dee campsite (http://www.ballochodee.com/) near Newton Stewart in Dumfries and Galloway.
I had got a topbox for my GS from Faithir and this was my first time away on a bike with a topbox for years, the last bike I had with a topbox was my CB500s back when I was 21! Anyways, I usually have all my shite in my panniers with my tent strapped to the back along with my roll bag that contains my sleeping mat and sleeping bag. Now with the topbox on the back the tent and rollbag was over the back seat, it looked like I was going away for three months! There was a guy in the petrol station who was pissing himself when I told him I was only away for one night, I had to explain that there was still loads of space left in the boxes.
Fuelled up, we had a gentle ride following the A701 down to Moffat. For non bikers, when you get new tyres fitted you need to "scrub them in" over about 300 miles till the release agent is out of them. The tyre needs to get up to temperature to do this so you cant cut corners with sand paper or any pish like that.
Coming into Moffat my vision was getting obliterated by the ever increasing layer of insect genocide on my visor which prompted a wee visit to the Buccleuch Arms Hotel (which also happens to be HQ of Moto Go Loco, more on these guys to come in the future) where Clint gave me an awesome V2 Sponge, which get flies off yer helmet no probs. Cheers Clint! 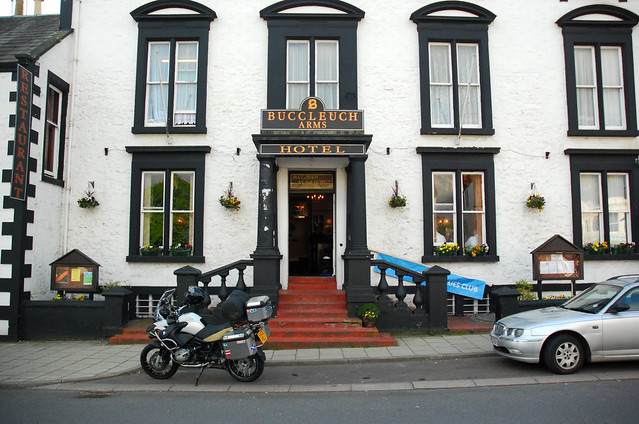 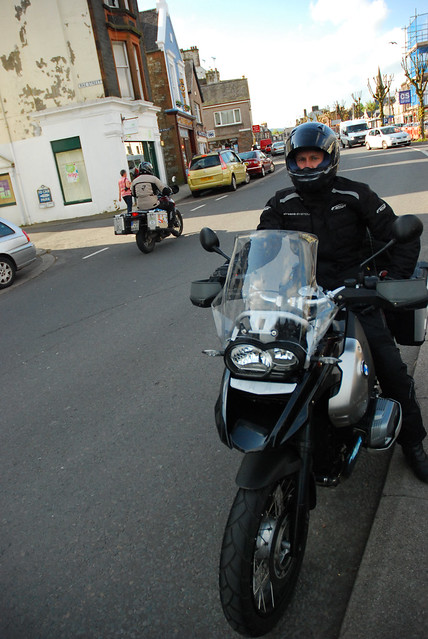 Some size of a beak on that.

From Moffat we followed the A701 then the A75 to Dumfries then to Crocketford. At Crocketfod you turn of on to the A712 which takes you all the way to Newton Stewart. This is a fucking stunning road with plenty nice tight corners. It was a bit of a shitter finding this road when I was still running in my new tyre, between that and being occasionally blinded by the sinking sun our pace was a bit more relaxed than it would usually have been, but it was still great fun. 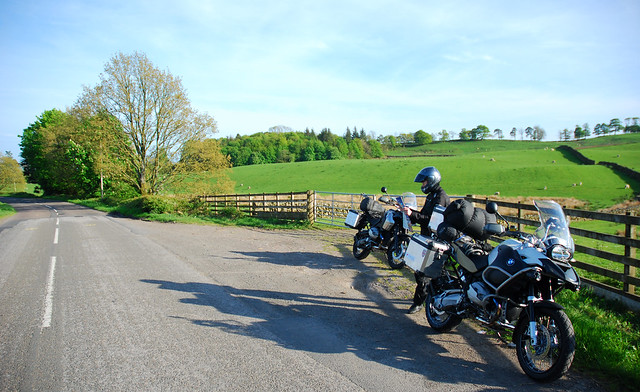 Newton Stewart is a nice wee town. Ben treated me to a donner meat and chips (oh aye, diet of an athlete) from the chippy where the owner told us his tales of trips to Edinburgh and asked us about our local chippys and their "taste." It turned out when he had headed into the big city he had lived on Burger King and had never sampled his North Easterly competition.
We stocked up on beer an snacks and headed off to Balloch O'Dee campsite. We had found this site at pretty short notice and weren't sure what it was going to be like. A few miles out of Newton Stewart you turn off the A75 and follow a nice single track road over a wee hill where you can see the campsite in its stunning location.
At the site there's a sign that says "Pull up, pitch up, chill out" So we got on with getting the tents up and having a look around. The site really is good. We were pretty chuffed. The tents went up easily as there were no rocks in the ground trying to bend our pegs. There are fire pits dotted about the place and you can either bring your own wood or buy some on site. There are also a few animals wandering about and some petting pens with sheep and rabbits in them. Hens supply complimentary eggs and you can watch the horses running around in the next field or play with the dogs if it takes your fancy. The showers are free and nice and warm, and the lighting in the toilet and shower block is mostly by candles. There's even a Bothy and a Roundhouse that are available to hire at really good prices.
We got a fire going with the age old technique of lighting a firelighter and had a few beers while trying to figure out what was what in the clear night sky. Astronomers we are not. We had a chat with the owners who were really laid back and generally spent the rest of the night talking shite. A great way to spend an evening!
Have a look at http://www.ballochodee.com/ for the info on the campsite. It really is worth a visit. 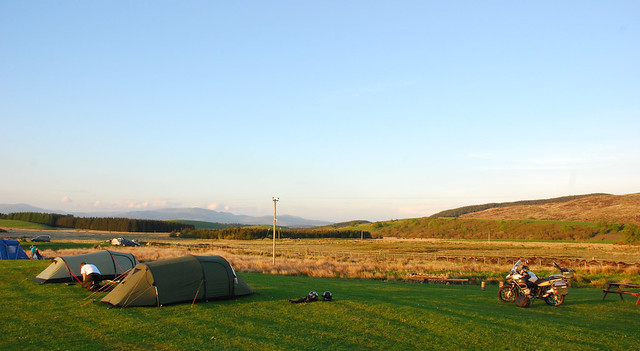 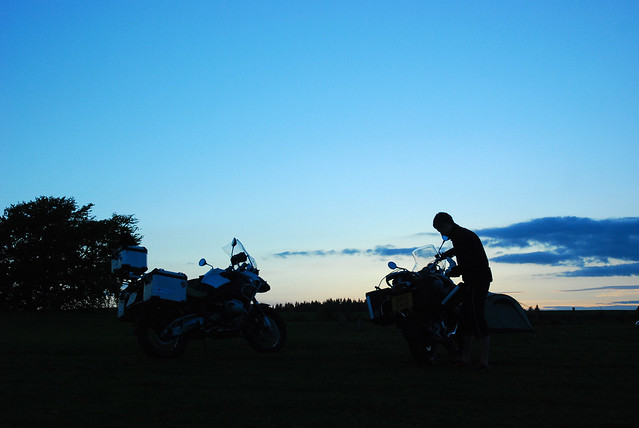 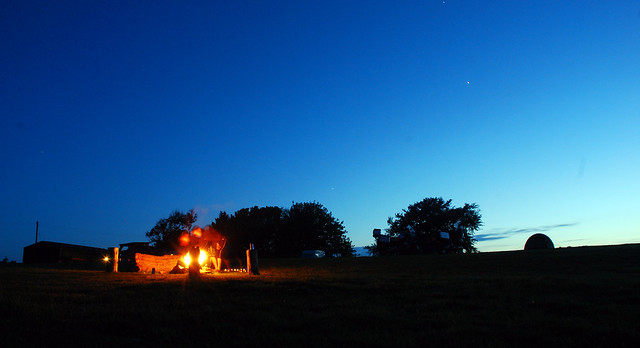 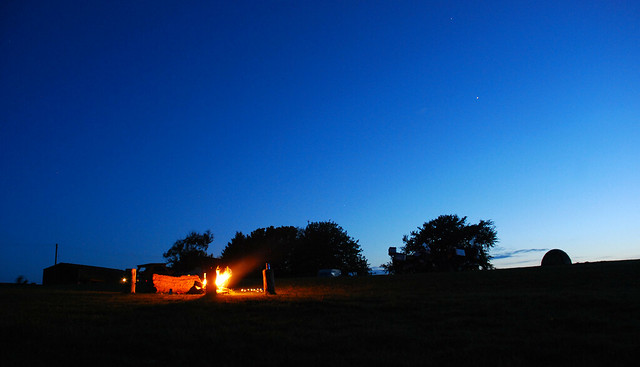 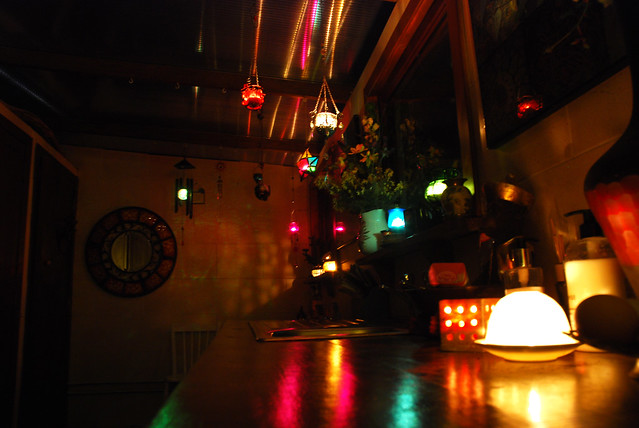 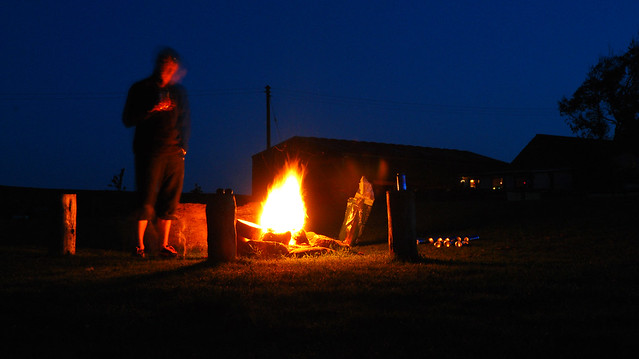 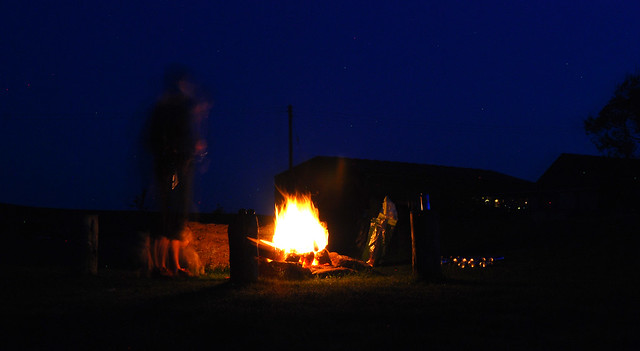 There's a wee blur of a dog there somewhere. 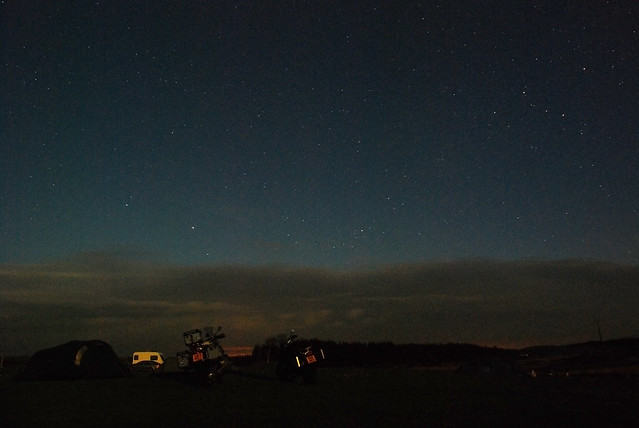 The following morning I had a cracking shower and a breakfast of porridge and an egg from the on site hens. I forgot coffee but James and Hazel, the owners, gave me some. We got packed up, said out goodbyes and headed off around the A75 to Dumfries. This was OK, but next time I'll stick to the A712 through the New Galloway Forest. At Dumfries I lost Ben for a bit but found him again at Gretna where we had both taken the back road or tourist route into the town. From Gretna we nipped in, then right back out of England as we headed to Canonbie and from there along the awesome B6357 to Newcastleton. This is another stunning road and there were loads of other bikes out and about enjoying it like we were. At Newcastleton we stopped for lunch at the Olive Tree Cafe before carrying on more amazing roads until we joined the A68 and headed home. 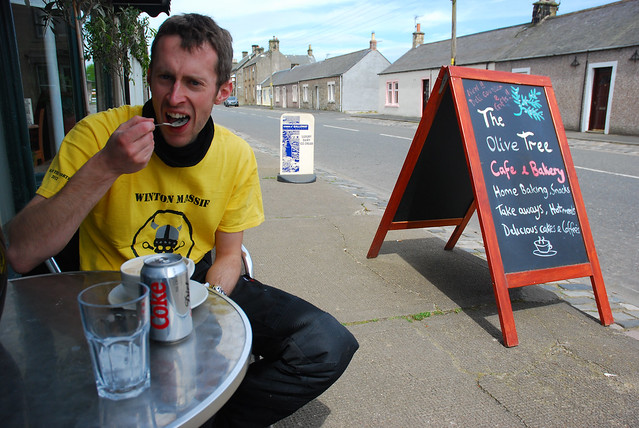 Ben fills his coupon in Newcastleton.

*This is what I'm going to start referring to the GS as. Moby Dick, the Great White Whale. I'm going to sound a bigger twat that ever now!!