Its the big day tomorrow and thank fuck I'm feeling a bit better. the doc has me on loads of drugs after I was floored by a chest infection on Monday. I've been in bed for 3 days solid and haven't left the house in 5 days. I'm getting cabin fever!
Before I was ill I managed to get out for a pedal in the snow with some mates. My mate Bruce made a wee video of the cycle here. Look out for my purple face in the video. 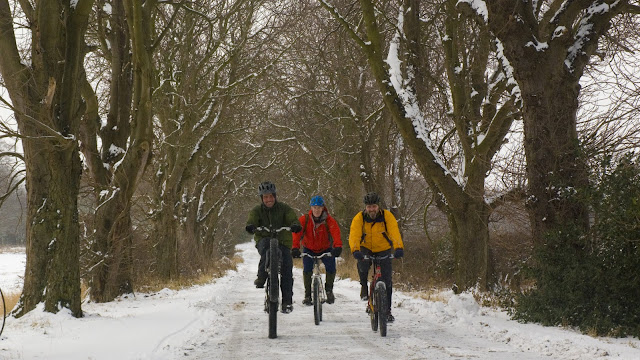 Its still pretty cold here, its been between -10 and -4, so now I'm feeling better I'm staying in beside the stove and having a white russian. 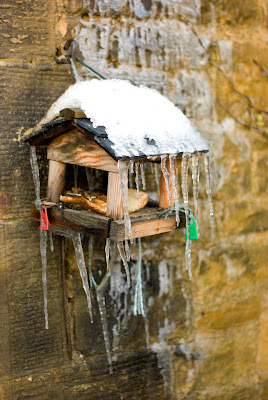 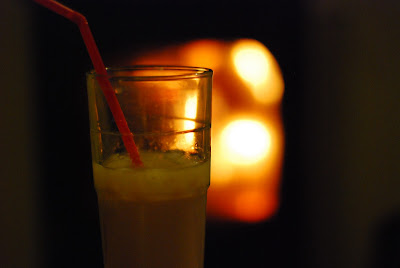 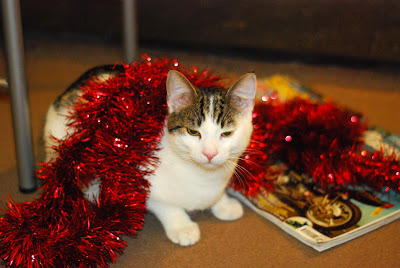 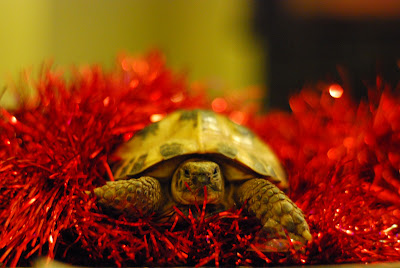 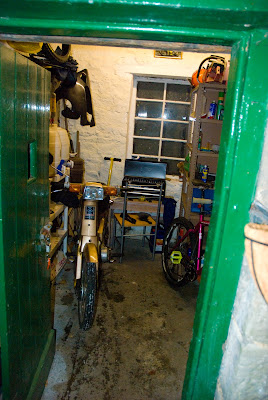 With the weather very slightly warmer I decided to check the bodywork on the C90 to see how much rust treatment I'll have to do to stop it all rusting away when I take it to the snow on the salty roads. The C90 was running a wee bit temperamental the last time it was out and its wasn't starting at all, so I whipped the plug out to check it. It was a wee bit black which makes me think its running a bit rich. I had been farting around with the idle screw on the carb as the 90 had been idling to quick, then after my adjustment, not ticking over at all. Bastard. Anyhoo, its still getting a good spark so the plug is fine. The choke cable needs replaced though as its really sticky, this might have been causing the rich running if the choke has been stuck on a wee bit. 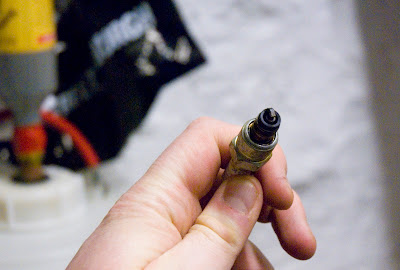 The rear indicators took a fair hammering when the C90 was used as a trials bike back in July, it was crashed by a fair few folk but sustained no damage apart from breaking the all ready half-fucked-and-sagging rear indicators. Faither recons he can fix them, but I think I'll have to replace the rubber stalks which go for pretty cheap on the bay. 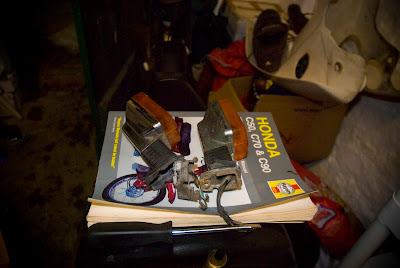 Getting the back wheel off was a piece of piss, or it would have been if I'd read the manual properly and disconnected the brake properly. Instead I spent ten minutes hauling away at the wheel while it was still attached to the bike, what a bell end! 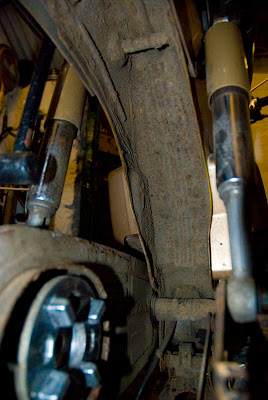 When I finally got the wheel off I was quite surprised a what good condition the bike is in. Under the dirt its pretty solid with only some surface rust here and there. The guy I bought it of had kept the bike in a corner of his garage for over seven years, but it looks like it never seen a winter on the road before that. This is all good, and rust proofing should make it last for ever!
So next I have to decide what to paint the underside with. I'll give it a good clean and paint it with some sort of anti rust stuff and then waxoil on top of that. I'm sure all the folk on the C90 Club forum will point me in the right direction.
Posted by Mike at 1:04 AM 6 comments:

Faithir has got himself a new project. An MZ 250 ETZ! Its a proper eastern european utility bike, 2 stroke with an enclosed chain and a huge big rack on the back. I went round to see it last night. 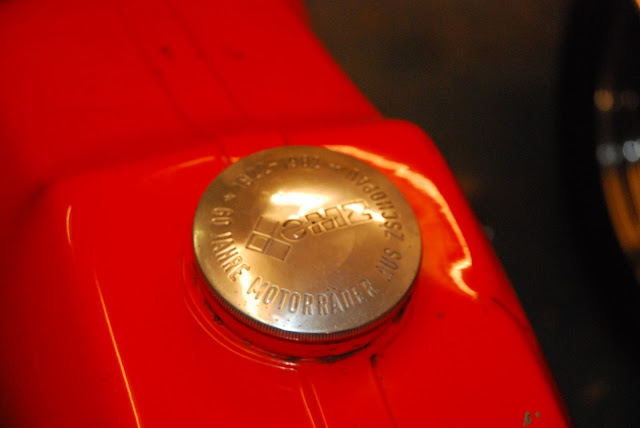 It never came with a battery but I had a spare in the shed so I took it round. My Dad reconed he'd have it going in no time with a quick clean of the carb and fuel system.
Sure enough he phoned me tonight and......


I got out on the push bike for a wee pedal with Dave this afternoon, the first cycle in over a week. The trails are still pretty fucked with the ice though. Sometimes cycling through that is like trying to shit on the ceiling! Its forecast for more cold so no let up yet.
C90 plans are going well though.....
Posted by Mike at 12:42 AM 1 comment:

Its still been snowing loads here. The car is stuck in the drive because the snowplough blocks me in when its clears the snow from the main street but I managed to get to work thanks to Treeman picking me up. Here's a bunch of pics I've taken while out and about to show how snowy it is. 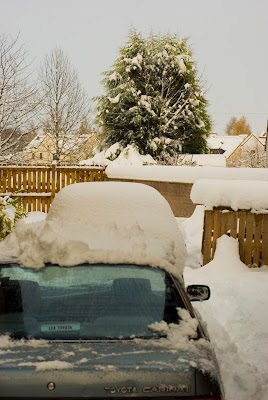 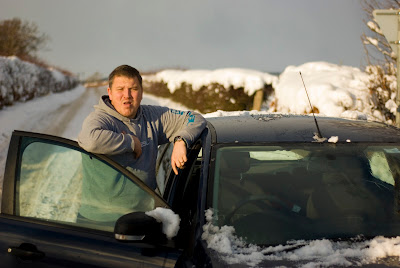 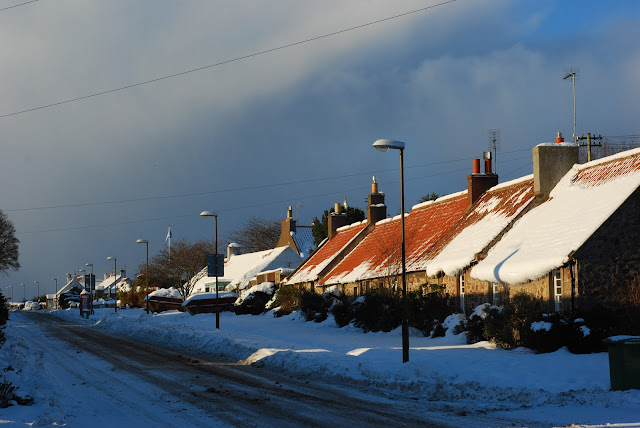 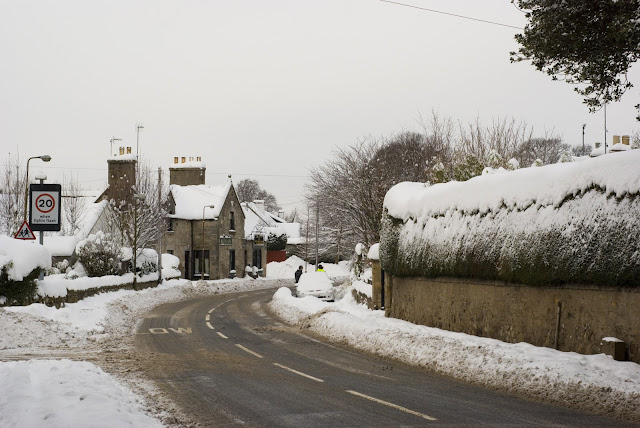 I've still been attempting to go cycling. I'm quite impressed at the amount of grip I'm getting with my tyres that are meant to be for dry dusty conditions. I'm getting more grip than I do in the mud! Its a different story in deep snow which is impossible but thanks to folk dragging their kids about on sledges the trails have compact snow in the midldle of them, but if you go off these bits its up to the axles in snow. HB even had a shot of the bike on the Winton Estate which now has much more grip on it than GHC experienced due to all the snow, rather than the ice rink it was before. The other thing thats been hindering me is the gear cables, they freeze up and stop the rear mech working, so I can't go up the gears. I usually only need first gear anyway as I find it easier to keep going if my legs are spinning quite fast. I've stole my mum's spare hairdryer to defrost them after a run. 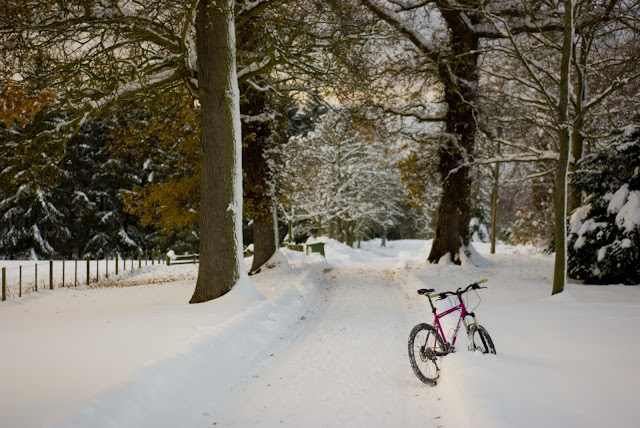 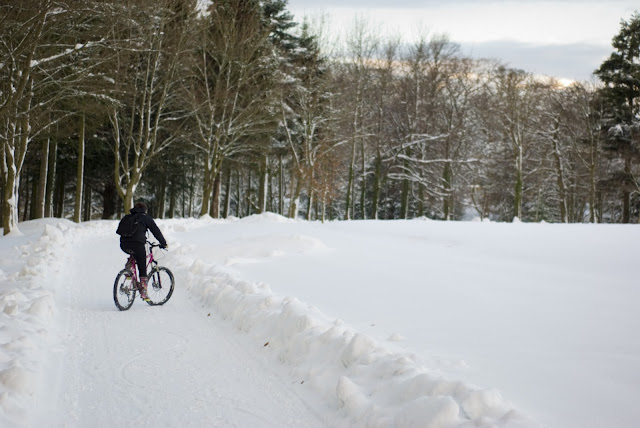 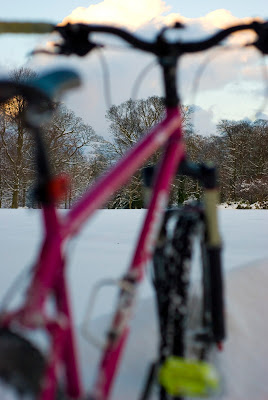 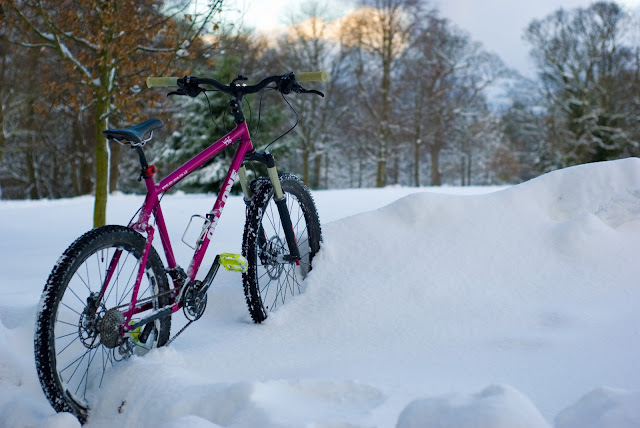 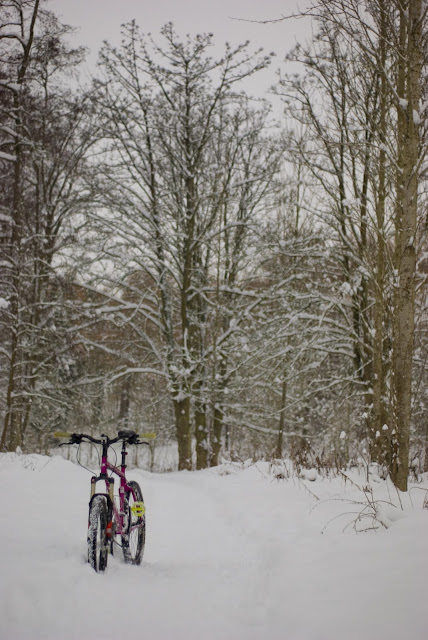 That was yesterday, I recon we had another half a foot of snow today!
Posted by Mike at 6:20 PM 2 comments: