From the coast to the hills.

The recent cold spell here has warmed back up a wee bit so I've been for a few spins on the GS. First up I went for a wee spin over the Lammermuir hills to visit the Hoodster. I fitted my RAM mount with the GoPro to the engine bar of the GS for a wee film. You'll see in the video I'm up near the wind farms. When the first wind farm was built I thought it was cool, but now they are spread all over the Lammermuirs and are quite an eye sore. Coupled with the fact that they don't really work very well makes me think that they should just scrap the idea. Anyways, I had a nice run. The roads were quiet and surprisingly mud free considering the time of year, with all the farmers ploughing their fields. The weather was nice, up the hills it was a wee bit nippy, but the heated grips kept me warm enough.
A few days later my mate Ben and I went for a wee spin down the coast to North Berwick. It was another nice day and apart from a few North Berwick drivers crawling along at 30mph, (in a 60) we had a nice run. After Ben treated me to a juice at NB we headed home via the hills. I had the Gopro with me again so I've made the footage from both runs into a we film.
Let me know what ye think.
Posted by Mike at 4:33 PM 7 comments:

Moto GP star Marco Simoncelli was killed today in a racing incident at the Sepang circuit, Malaysia. Marco was one of the sports rising stars. An exceptional talent on the track, an infectious character for the fans and a future World Champion. The world of motorcycling has lost one of its brightest stars, and the world has lost an outstanding character. 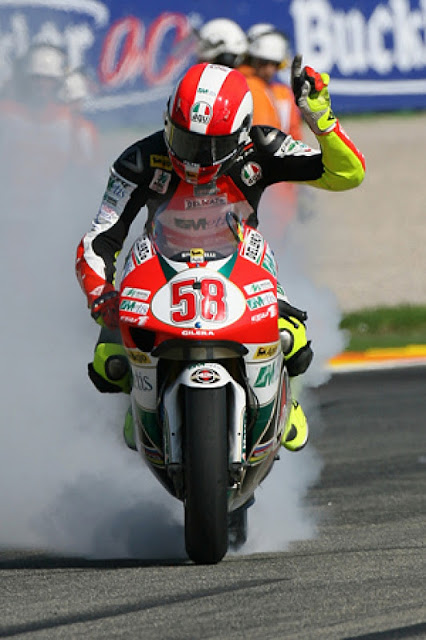 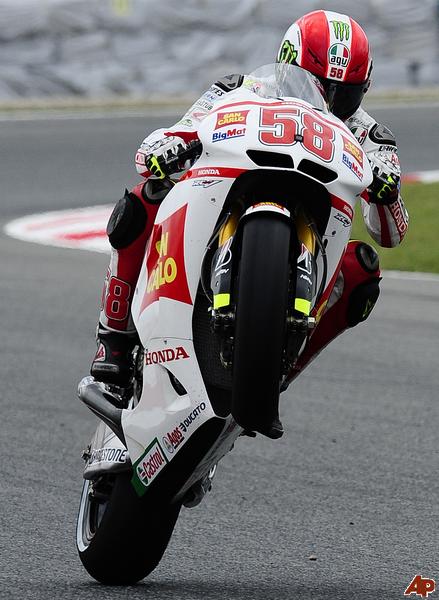 With the nights drawing in I've dug out the lights for the push bike and been night cycling. I've not been able to get any good videos on the Gopro as its too dark, but I've ordered a second light for my lid, so that should be here anytime soon. Hopefully with it mounted on my lid it'll provide plenty light for the Gopro to get a picture. My other pushbike project, the Surly Pugsley, is still at the painters. There's no hurry to get it back, as it will be a while till I can afford all the parts to get it built.
I got an e mail from my Pugsley riding mate Bruce the other day suggesting we go for a blast on the beach, me on the Pugsley and he'd be on his 29er, (google it) a Surly Karate Monkey. I was planning on going for a wee spin on the GS, but I couldn't turn down the chance to go for a proper cycle on a Pugsley.
I bought my frame off Bruce a few months back. (see this post) His current Pugsley is exactly the same frame size as mine and it was good to find out it was comfortable for me as some folk thought it could be a bit small. So I grabbed my camera and the Gopro and we headed out towards Tyningham.

The Pugsley and the Karate Monkey with the Bass Rock in the background.

The Pugsley on the Secret Trail.

Pugsley in Binning Woods
The Pugsley is awesome fun. It works really well on the trails with the big balloon tyres floating over mud and giving loads of grip on rocks and roots but where you really notice the difference in on really soft stuff like sand. With only around 8psi in the tyres the Pugsley floats over stuff normal bikes just sink into. We even went belting doon the sand dunes!

Bruce showing how its done on the dunes.

Cheers Bruce, sorry for getting your bike so clarty!
I had the Gopro with me and Bruce had brought his along too, which made making a wee film much easier. Here's the masterpiece.

A few folk might remember my wee C90 taking quite a hammering at Hamfest earlier this year. The rear mudguard, light and number plate holder were all broken, as were the indicators. I also lost a footrest rubber.
Well thanks to Ed from the C90 Club I now have the majority fixed. He had the parts I needed and for a few beer tokens he posted the bits up. Sweet!
I've not fired it up yet. The '90 wasn't running at its best before Hamfest, so its getting a full service, I'll adjust the valves and get a new spark plug for it. I'll get Faithir to chuck the battery on the optimate and get a proper charge in it and I'll get fresh fuel as the tank is nearly empty.
Fucking champion.

My plans for a camping trip with HB this weekend have been well and truly scuppered. We had chosen to go to either Glencoe or St Mary's Loch. Earlier in the week there was some snow on the hills at Glencoe and the forecast was for it to be pretty cold and wet. Then it started to pish doon everywhere else, St Mary's Loch included. We figured it would be best to do something else rather than sitting in the pishing rain in the tent for a night.
I still fancied getting the bike out for a spin and when I went to get it Faithir offered me a shot of his old R80GS. I went for a wee spin down the coast on it. Its a nice bike to ride, not the fastest but it sounds amazing, and I got to try out my RAM mount with the Gopro. I got the RAM mount ages ago but at the time my camera gear didn't really take to being mounted on the bike. With the Gopro it works really well, I'll be able to get some interesting angles with it. The only down side is that it takes quite a while to mount but one its on its solid.
Here's the film.

I woke up this morning with a cold! Fux ake! Hupefully I can shake it off quickly and get out on the GS before the winter weather arrives. Some panic merchants in the media were banging on about it snowing this weekend and the roads getting gritted.
Nae use!
Posted by Mike at 2:52 PM 5 comments:

My mate Bruce, aka the nearly celebrity status cyclist Coastkid, has nominated me to complete a blog challenge that is kicking about. Nominated blogs have to contain a list of the following:

I also have to nominate five other blogs for the challenge. If the authors are up for it, I nominate the following blogs.


All things Rogey
New Zeland biker and abuse giver Roger's blog on his bikes, adventures and life in New Zeland.
Lowey Dot Com
The Diary of an Inept Mountain Biker written by Lowey, a keen cyclist and beer enthusiast who doesn't fuck about and tells it how it is.
No Through Road
I'm bouncing the challenge back to Bruce with this one. This is his other blog exploring alot of hisorical places and buildings around East Lothian and further afeild.
BikELove
My mate Gav's blog on East Lothian's historic buildings and places. Lots of GPS stuff here too. Gav fucking loves GPS.
A Northern Light
Winton Massif member and general sexy badass Ferg's Blog. Ferg's a gifted writer with a much better command of the written word than I have, but his blog is a relatively young one with not that many posts, so Ferg, you have a month to add more stuff to your blog before taking up this challenge. Are ye up for it??

So that's my nominations. Here's my posts for each category.


What's your most beautiful post?
This was quite a hard one. I don't have many posts that I'd consider beautiful. So I put it down to a post which just had me doing something I enjoy. So I think it would have to be Today Was A Good Day. 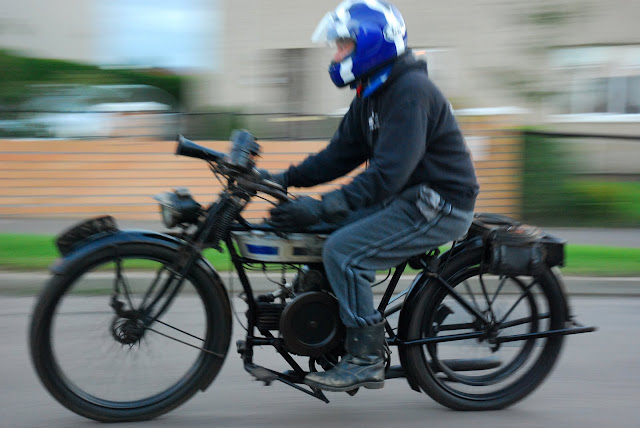 What's been your most controversial post?
Another easy one. Before Mikeworld became what it is today, I pretty much just used my blog to rant about stuff. Here's one on Elderly Drivers.

What's been your most helpful post?
My most helpful post must be the review I did of my bike lights. I'd liked to have put one of my food posts up for this but the stats say that this post was one of my most popular. I hope its helped folk. Here is is. Magicshites 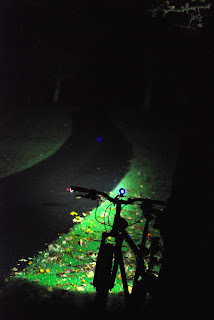 Which posts success has surprised you most?
This has to go to my post Hamfest. I was really suprised so many folk looked at this as Hamfest is only really attended by my mates. Still it got quite a few hits which is nice cos it was an awesome party.


Which of your posts do you feel didn't get the attention it deserved?
This was another hard one to answer. I don't really feel an of my posts deserve loads of attention. The one I picked is called Run To The Hills, I thought more people would have looked at it or commented on it as its so fucking stupid! 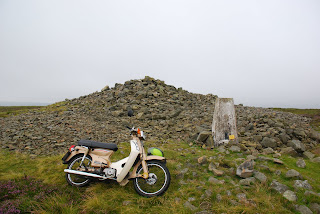 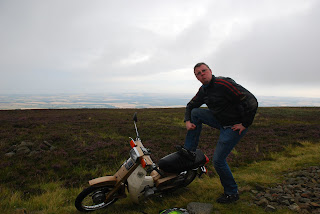 Which post are you proudest of?
This one has to go to Winton Massif 2011 Sloppy Seconds Tour, my post about my trip away up north on the GS. I liked how this post shows some of the places I love to visit in Scotland and I was pretty happy with the wee film at the end.