Between Lockdowns - An old bike run.

Coronavirus was still very much kicking about. There was talks about Lockdown type guidelines coming back into force and the weather forecast was looking fucked. Aidan and I were still positive, as was Andrea. Bike trip!

The plan was pretty simple. Three nights camping with an extra night for me staying with Aidan and Jess at the start of the trip. We'd decided to take our rolling projects rather than our usual touring... sorry, Adventure Bikes. I'd picked up my BMW K75s a while back and had been fixing through the issues which a BMW that's been sitting around doing nothing throws up. Aidan however had just got his bike a week before, a Suzuki DR350 which he'd procured from Joe. Joe is usually seen in these pages driving a BMW car through the Alps on our Europe tours. A rolling project usually isn't short of issues but the DR was legal and roadworthy and we had all assured each other it was reliable when Aidan bought it, hadn't we?

The weekend before the trip, the weather forecast was looking fucking horrific for our panned route. As the week went on however things began to improve. Portmahomack, my proposed first night destination on the East Coast, was looking great! Positive vibes a flowin', I packed all the things necessary for the trip on to Mikey Sunter (the name I had given the K75) which was in my parent's garage (I was in the middle of flitting) and got my shit together to set off. When you're used to packing an Africa Twin with stacks of space then you're used to having plenty space for a few luxury items. It's not just that, top loading panniers are always much easier than suitcase style stuff or soft bags when you're camping. There was a genuine panic when I thought I wouldn't be able to fit my Boombox on the back.

Panic averted, I set off with my Boombox secured to the K75. I'd also rigged up a charging system to keep my spare Gopro batteries sorted. A nice but wet run took me to Oban where I refuelled the bike and filled myself with a chippy. Aidan's place was just a half hour or so away where it was beers and hot tub o'clock. 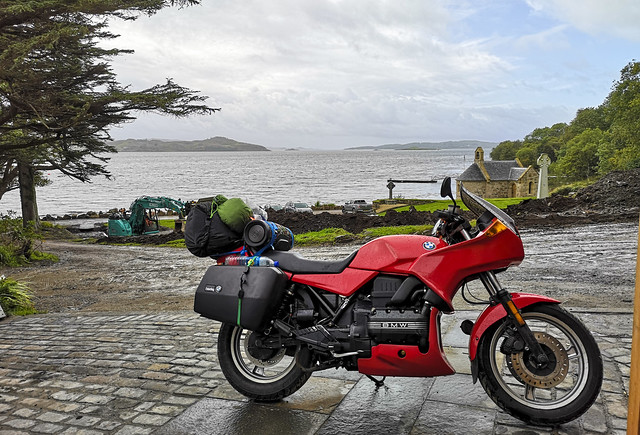 The sun was shining as we set off the following day after a few minor adjustment's to Aidan's DR and I repacked my kit on the K75. Aidan had a minor brown moment as we came back into Oban but turning the fuel tap to reserve (remember that?) confirmed he was just low on fuel. Fifteen minutes later we stopped again, it had started spitting so Aidan needed to get his one piece suit on. We had a good run up the east side of Loch Ness managing to avoid the worst of the rain. There's some great bits of road that run that way and they're often much quieter and have arguably better scenery than the A82 on the west side. 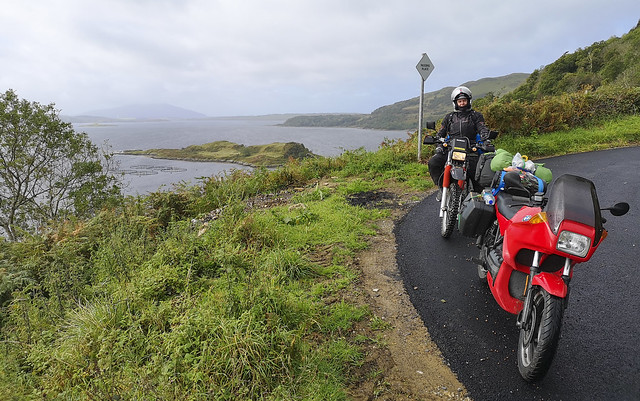 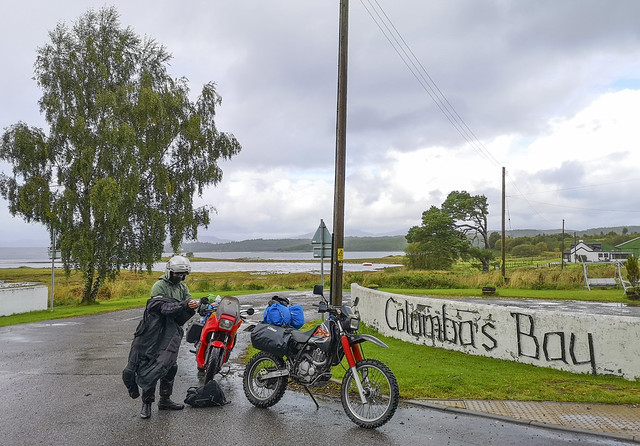 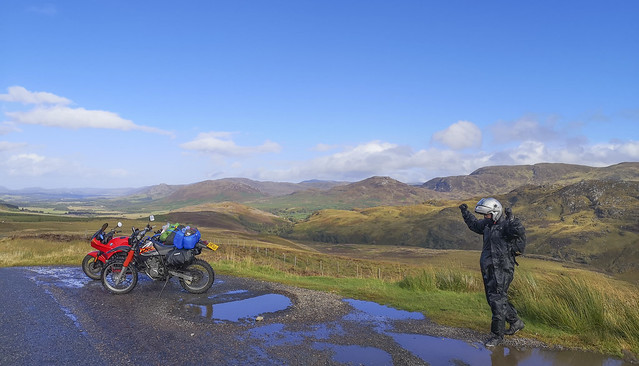 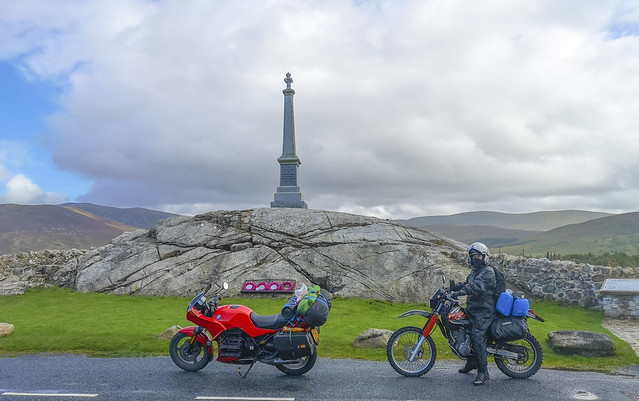 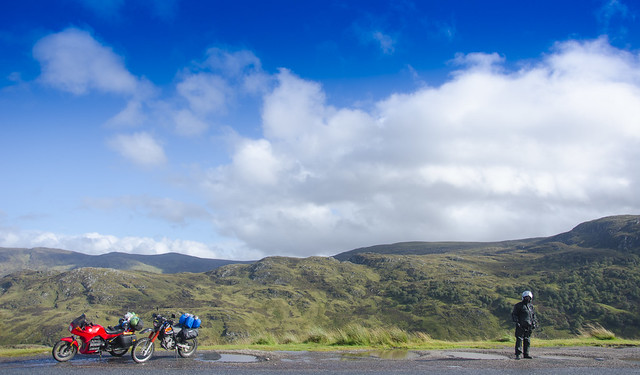 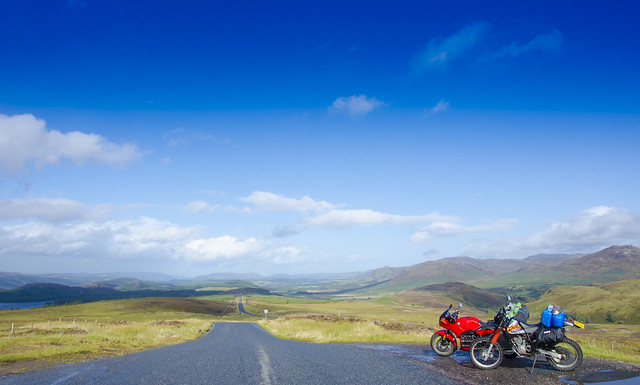 We arrived at sunny Portmahomack and found the campsite a real old school place ran by the church! I was slightly concerned I'd burst into flames or something but the minister was a sound guy who loved bikes. The site is pretty basic but has everything you'd need and is right beside the beach. We got some beers and stuff from the local shop and chilled out on the campsite to wait for Andrea who arrived a couple of hours later to the distinct sound of his Harley. We had a good evening in Portmahomack, it's a place I'll definitely visit again once the covid situation is better. 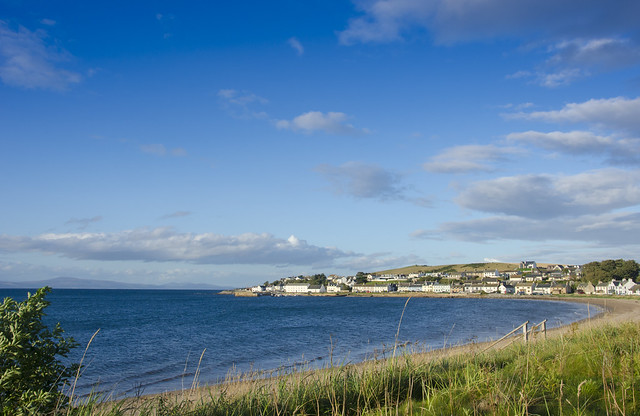 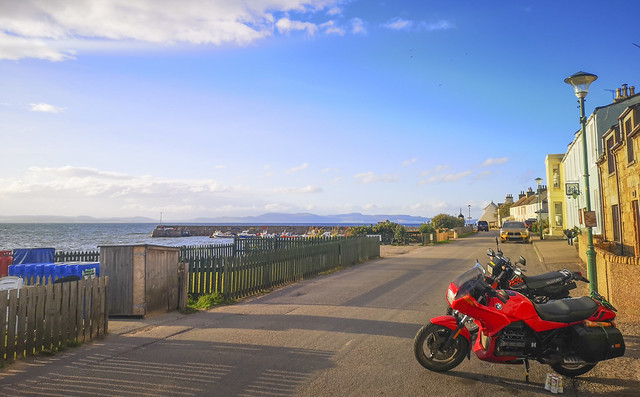 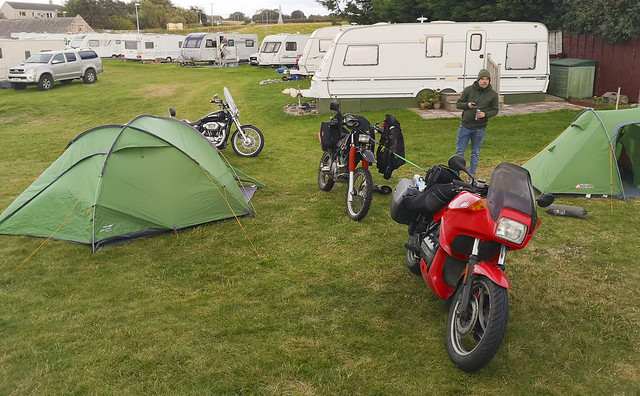 We had planned to ride over to camp near Gairloch the following day but the weather there was absolute shite. The rain and wind was so strong some of the roads we'd need to use were closed. A quick google threw up a few options and we ended up going for a Wigwam near Kinloss which was just down the road. I booked it over the phone and we were sorted. Even if it all turned to shit weather wise we'd have somewhere warm and dry that evening so instead of riding straight there we opted to head for a spin up to Lairg. Andrea and I were enjoying the run but Aidan was being battered about the place something stupid on the lightweight DR. Being the awesome navigator I am I missed the turn off for Alness after Bonar Bridge, totally fucking up the route I had in mind and bringing up out right back at Tain where we'd had breakfast that morning. Aidan and Andrea seemed oblivious to my navigational fuck up and we carried on down the road. 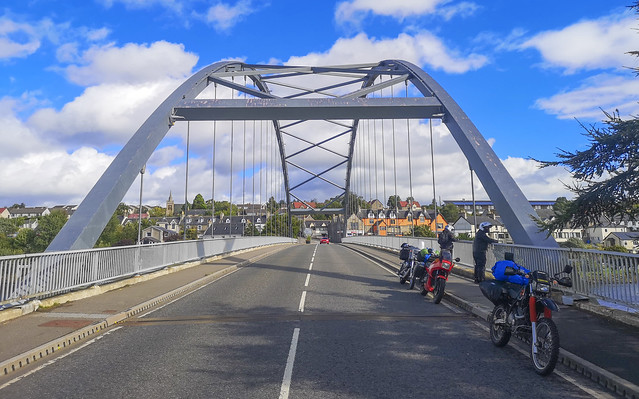 We arrived at the Wigwam place (which shall remain nameless) to find it seemingly bereft off all staff. Eventually someone appeared asking "Who booked online?"
"Nobody, I booked over the phone." says I.
"Yes, but did you get an email? You must have got an email."
"I got the paypal link, is that what you mean? I paid via paypal while I was on the phone."
"Yes, well you've not read your e mail!"
At this stage I was wondering what the fuck was wrong with this guy. I humoured him and reread the email. Sure enough it says that the keys are in an envelope with a welcome pack in a box by reception.
Keys in had I ask "Which wigwam is ours?
"You've not read your welcome pack!"
Now I'm thinking "this guy's a fucking idiot." There's a wee map in the envelope. i now know where the wigwam is.
"Right mate, can you open the gate so we can get up to the wigwam?"
Nothing in return but a blank expression. I jump on the bike.
"How do we get to the wigwam?"
"You've not read your welcome pack..."
"You could just fucking tell us."
"There's no vehicles allowed on the site."
"Fuck this, we'll go somewhere else."
At this stage Aidan took over with his more diplomatic approach. The guy accepted that having the bikes at the other side of the site to where we were staying wasn't the most practical option and thankfully that was the last we seen of him. I've since given the site some feedback so I'm not going to name and shame on here. Apart from this guy the site was great but the last thing you want after a long day on the bike is an arsehole like that. 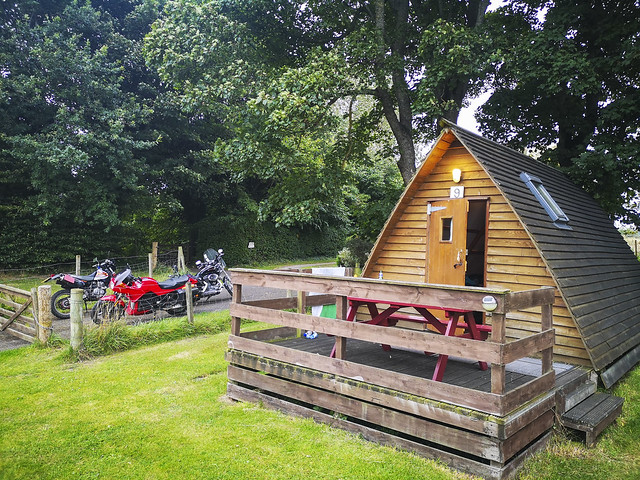 We visited Findhorn the next day for breakfast. I was expecting it to be a hippy commune but instead we found quite a normal looking village and a pretty decent cafe. Andrea was heading home and Aidan and I were supposed to be heading to Glencoe to go camping but the rain washed that plan away. We opted to go back to Aidan's instead. What followed was one of the wettest runs I've had on a bike in years, we were both soaked! 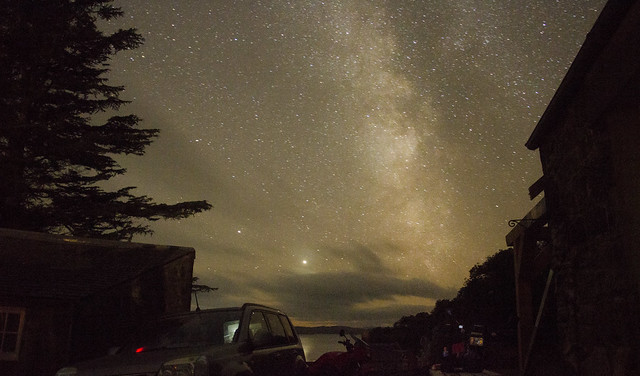 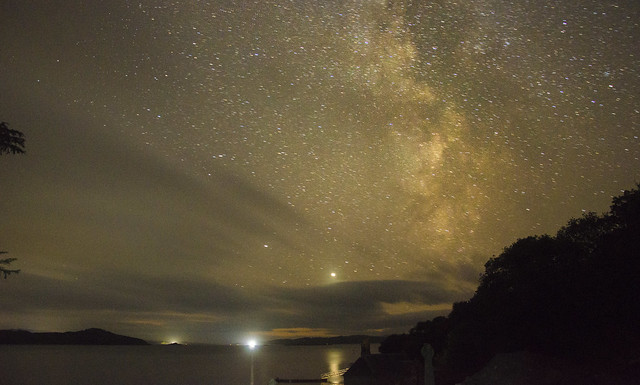 All in all it was an enjoyable trip despite the weather and fuckwitery. I discovered the K needed new brake pads which upon changing looked the the first new pads it had seen in years! The sun even came out for my ride home.
The epic feature length film of the trip is below.
More soon.
Mike 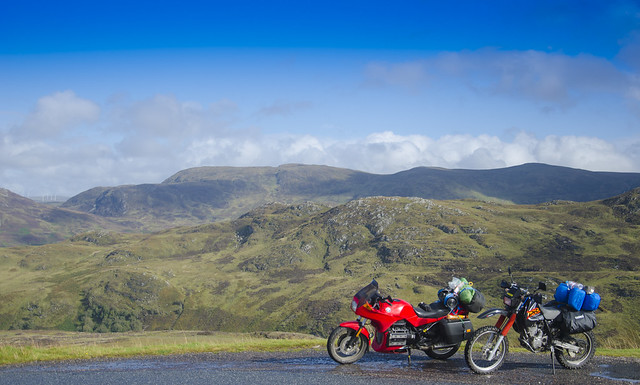