For the past few years my mate Hammy has had a big party in his parent's garden around the same time as the air show at the Museum Of Flight, which is pretty close by. Over time more and more folk have come along to what is now knows as Hamfest. This years Hamfest was no different, there was lots of beer, barbecue and drunken C90 trials riding. The C90 took quite a beating this year when a guy called Bobby binned it into a tree, breaking off the number plate and bursting the rear mudguard, but I should be able to fix it pretty cheaply.
I went down on the Friday night for the quiet pre party and camped over. I learned from previous Hamfests not to go hammer and tongs on the Friday, end up a casualty on the Saturday, and be too rough to watch the air show. This years air show wasn't as good as previous years, there was no Spitfire and no Red Arrows, but it was pretty cool hearing the WAP WAP WAPof the Huey and everyone jumping around shouting Apocalypse Now/Full Metal Jacket quotes. I took the camera and the Gopro down, heres the photos and film. 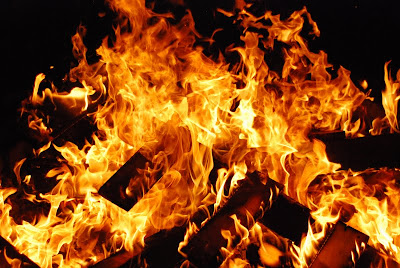 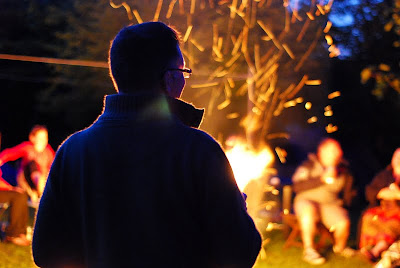 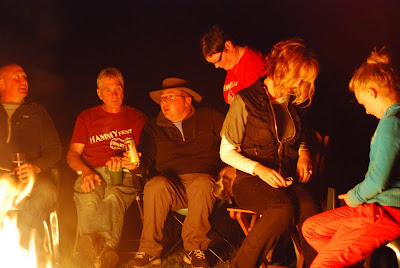 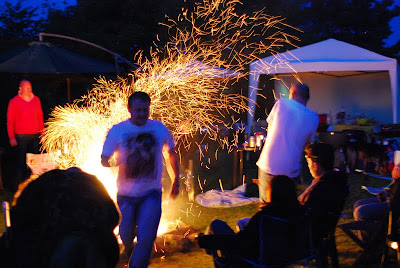 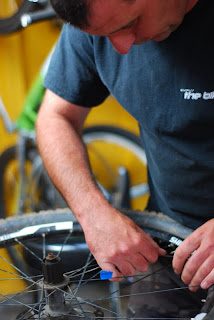 My mate Bruce been cycling his Surly Pugsley bike around our coast for a wee while now. You can read all about his adventures on his Coastrider blog (http://coastkid.blogspot.com/). Recently he got himself a new shiny purple frame. So I bought his old one! I got a the frame, fork, seatpost and two semi-worn Endomorph tyres. It'll take me a few months before I can afford to build it all up, but I'll keep a track of it all on here. When I was down picking the Pugsley up Bruce even fixed the spokes I burst on the wheel of the On One, which will hopefully have new cranks soon. 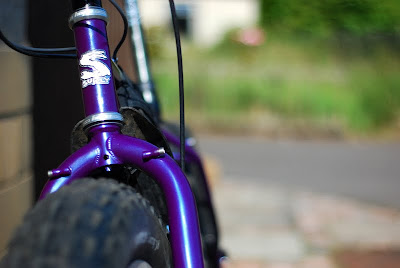 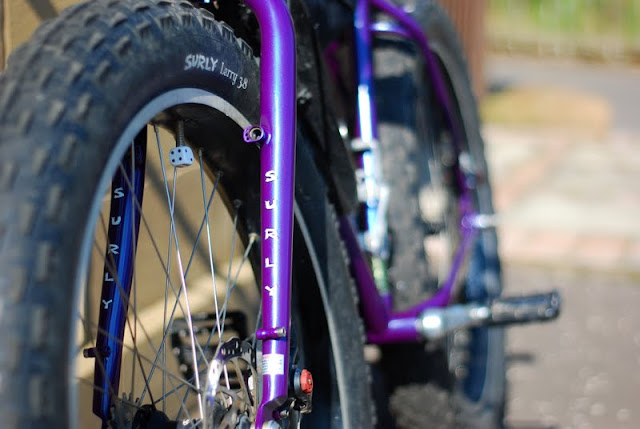 I went to go for a wee cycle this evening and I noticed a wee bit play in the cranks. I went home to check what the problem was and found this shit! The cranks have totally failed, so that's the pushbike off the road for a while. Thankfully FSA who make the cranks give a two year warranty on their stuff, so I should be pedaling again soon.
Posted by Mike at 10:16 PM No comments:

Satan's Shit and other delights.

A couple of weekends ago it was the Taste Edinburgh event. HB got us VIP tickets so off we went. After some excellent Thistly Cross Cider (brewed just down the road from me) and a complimentary glass of champagne, we went for a look round the stalls. The lady from Snowdonia Cheese had a stall with some cracking cheeses. HB and I bought a chilli cheese, a whisky cheese and an onion cheese. I don't usually like "flavored" cheese, but this stuff is ace.
Undoubtedly, the most talked about stall there was that of Chilli Pepper Pete. This guy has some serious ring sting inducing, hard as fuck chilli sauces. I was too scared to try any of them, brown sauce makes me sweat like a pregnant nun, so Chilli Pepper Pete's stuff would really have fucked me up. Pete's hottest product is Satan's Shit. Here's what the blurb on the website says about it.

Taste Satans last supper. This is what I believe HIS poo would taste like. This is for the chillihead from hell. When descending into the pit of doom take a jar with you to brighten the way.
If your into extreme you now need to be into extremely extreme for this one. I warn you to use a little at a time as there is nothing else like this one.
Containing some of the hottest ingredients available this one hurts more than anything I have ever tried and comes back to haunt you if you overdo it! Satans Shit is really bloody hot.
If you buy this product you release us from any responsibility for damage it may do to your system. You will need to sign away your soul to buy a jar.

My mate Liam got me a jar for my 30th and I still haven't worked up the balls to try it yet. I'll film myself trying it on the gopro. On the stall there was quite a few sauces to try ranging from mild to extreme. Extreme being Satan's Shit.
Tris from http://www.chillipepperpete.com/ seems to be able to walk the walk. While I was speaking to him I commented on one of his scotch bonnet peppers he had, he picked the fucking thing up and bit it in half. I would probably be in a fucking wheelchair if I tried that. Mental.

Its been pissing it down over the past few days, so I've been unable to get out and get much shit done. Plus I got fucking soaked commuting on the C90 over nightshift. I arrived at work looking like I pissed myself.
Anyway, it cleared up a bit recently and I managed to get out on the pushbike and make a wee film. I done two edits, tell me which one you thinks works better.

I'll start this post off by sharing this picture below. Faithir seen it in his Classic Bike magazine. Surely its a fucking wind up, but I might be wrong. 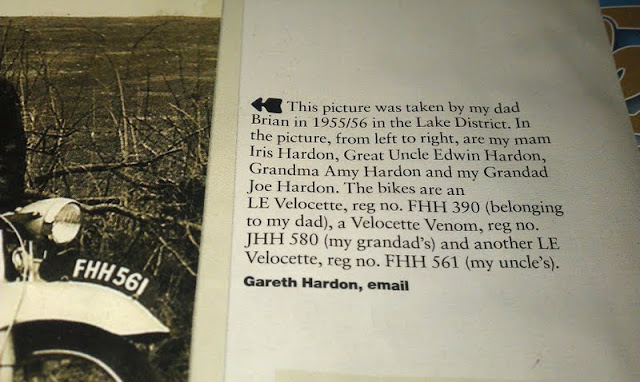 Maybe be you can help me figure out if it is a wind up. Are you a Hardon? Do you know any Hardons? Perhaps you know someone who has recently seen a Hardon, or you might have seen a Hardon yourself. Get in touch if you can give me any information on Hardons.

Hardons aside, I've had a few good outings over the past few days. I got out a wee run on the GS with Ben and GHC. We mounted the Gopro on different parts of various bikes and made a wee film. Alot of the roads around here are a bit fucked as "they" are resurfacing the roads, but all they do is chuck wee stones onto hot tar. The result is a road surface that is like riding on marbles. Ideal for motorcycles. 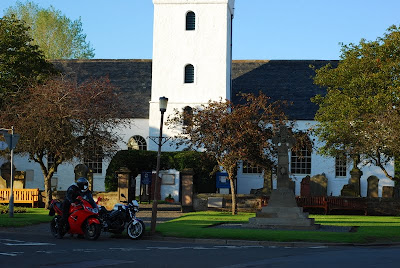 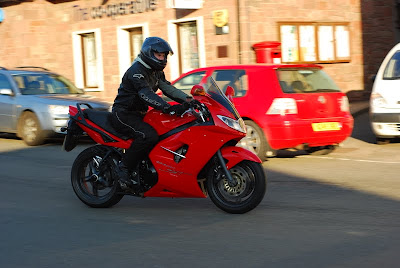 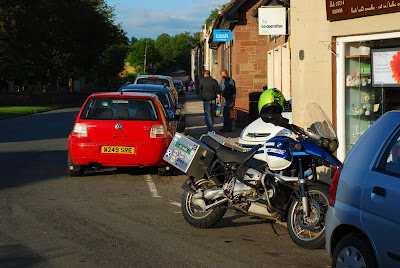 The following Friday I got a phone call from Sweeney, inviting me for a pedal up the Pentlands. I've never been cycling up there before so I was well up for it. It was a nice night and the views from the Pentlands over Edinburgh and East Lothian are well worth the effort, and it took me a lot of effort! I felt pretty fucked towards the end of the cycle, there were some long climbs as well as some bits we had to walk up. Maybe I was feeling fucked because I hadn't eaten anything, when I got home I was starving. Luckily before I left I had put a big chunk of chinese seasoned pork on the smoker, and HB had made some nice tattie salad. Awesome. 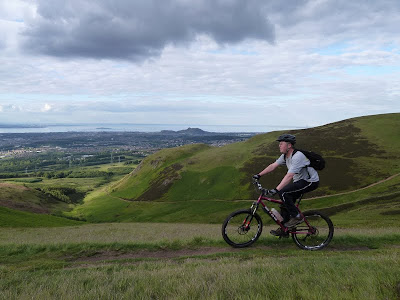 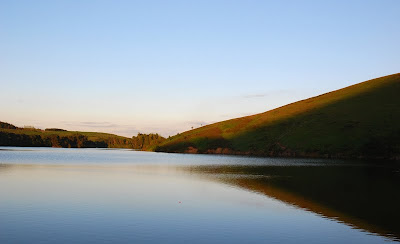 Here's a wee film I made of the cycle. It goes on a bit but I got some slow motion stuff near the end.

I got another run in on the GS over the weekend with Big Aaron. We went over the hills to Innerwick, a road I've wanted to film for a wee while, but the gopro was out of batteries. I did get this wee bit on my phone though. At the start Aaron is saying "Your on Mikeworld...." but the mic never picked it up.

Today I took my Cousin's bike for an MOT. Its a cut down Kawasaki ZRX 1100 streetfighter. I loved my old ZRX and it was nice to get a spin on another one. Its for sale, if anyone is interested give me a shout.
Posted by Mike at 11:09 PM 4 comments: