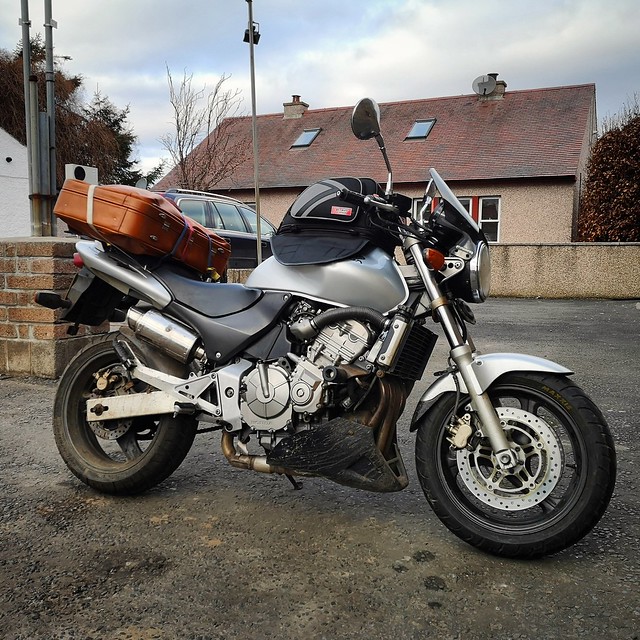 I've always fancied the Elefantentreffen, or Elephant Rally, the most famous of the winter bike rallies held in the German hills in the middle of winter. I'd got the Hornshit as my trusty winter hack, now all I needed to do was see if anyone wanted to come with me.
Ah, so no one wants to ride to Germany in the middle of winter.
Hmmm, I'd need to take a week off to get there.
It's no gonnae be the cheapest either....

A quick message round the Massif threw up a few keen replies. Mikey, Other Mike, Snake and Smillie were all keen.
"Will we open it up to anyone who wants to come?"
"Aye!"
We needed a name, and so was born the Winton Massif Frosty Pubes rally.
Now all this was happening back in November or so. We'd chosen Sunart Camping to have the rally at. Our friend Tim runs the site and he was keen to do a winter rally. We were hoping for blue sky and a crisp winter day. A nice run over Rannoch Moor and through Glencoe, the hills dusted with snow and looking spectacular in the winter sun. It'll be awesome! 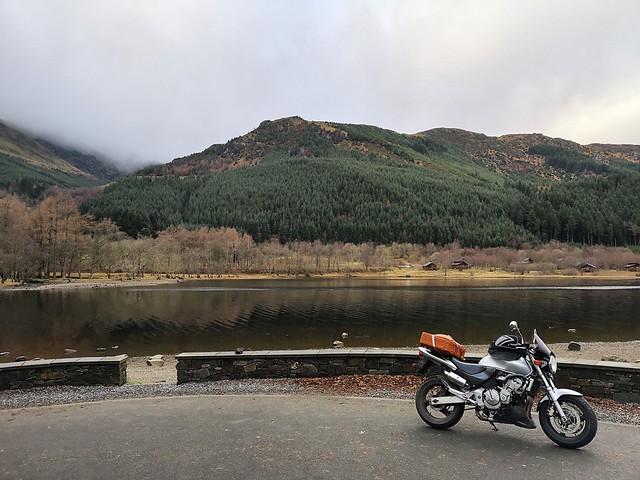 On the weekend of the rally the weather had different ideas to my idyllic winter's day I'd imagined. Warm and wet was what we had. Well, warm for January in Scotland anyway. Never mind, I strapped my amazing, home made ADV luggage on to the Hornshit, loaded up the massive tankbag with stuff I'd forgotten to put in the suitcase, sorry, ADV luggage, set the heated grip to hot and set off.
I'm 6'4. After an hour sitting on the wee Honda I felt like I needed a hip replacement. I think I've been a bit spoiled by the legroom on the big bikes I'm used to.
The roads were wet but the rain only fell in wee showers making the run up an enjoyable experience. The usually packed road up the side of Loch Lubnaig was relatively quiet. A brief stop at Killin to refill the Hornshit's thimble like fuel tank before heading up to the Green Welly to meet Tim and have some Cullen Skink (a nice Scottish fish soup)
It was good to see Tim again. He'd got his old Buell back on the road after a few years of hiding behind his other bikes in the shed. It was one of only two bikes in the Green Welly's famous bikepark. The Green Welly is one of Scotland's most famous biker haunts but for me its a bit over rated. the food is pretty overprices and often lacking in quality. Saying that, the Cullen Skink was braw and it was nice to get a heat and catch up with Tim. 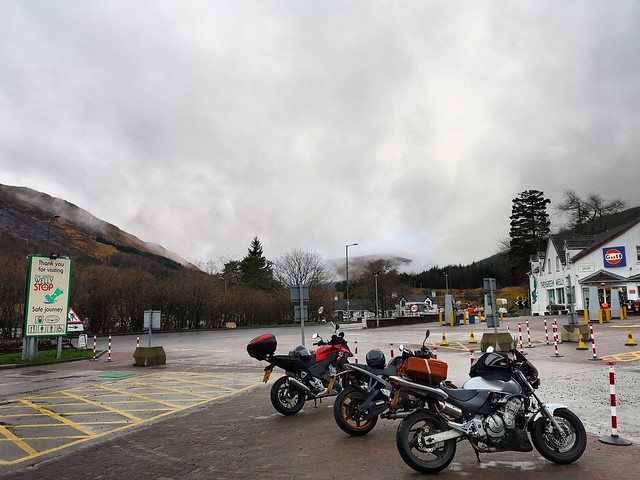 Rannoch Moor and Glencoe were equally quiet. Overtaking the few slower vehicles on the road was easy and, despite the rain and the lack of a dusting of snow, the scenery was stunning. Usually the A82 through Glencoe is nose to tail with tourists, trucks and other slow moving traffic. Having it relatively quiet threw up some rose tinted memories of bantering through the glen on my ZRX1100 back when I was 22. Even the usually packed viewpoint at Glencoe only had about three folk at it! 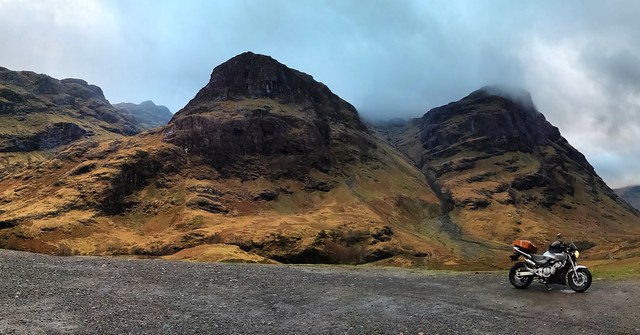 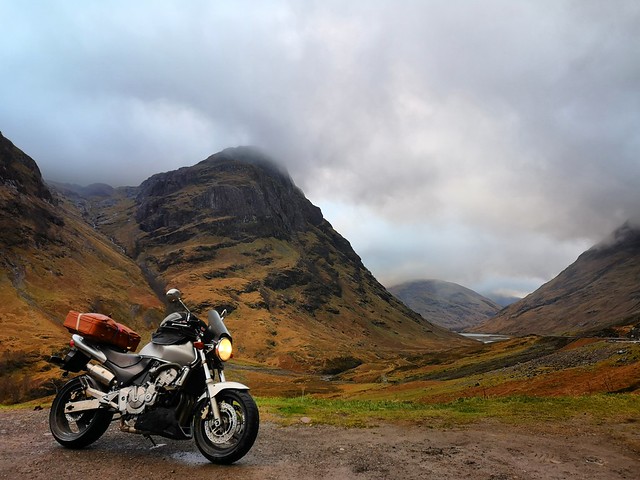 At the Corran ferry one of Tim's mates who works aboard told us a guy on an XT600 had crossed not long before us. Assuming it was Mikey and the rest of the Caithness crew who had left much earlier than I had, we battered along to Strontian to meet them. On arrival at Sunart Campsite were were greeted by Ian from Gairloch on his new XT660 Tenere. Don't get me wrong, it was great to see Ian again, but we were all getting concerned for the whereabouts of the Caithnesians. I'd seen on Facebook that Mikey has set off about 7.00 and now it was beginning to get dark. Where the fuck were they? 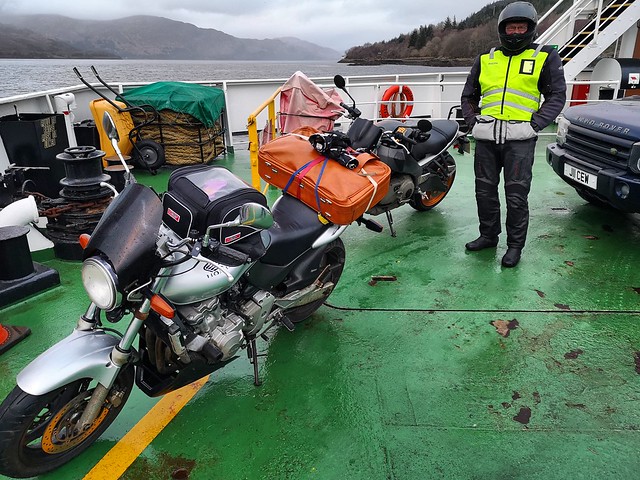 Tim on the Corran Ferry 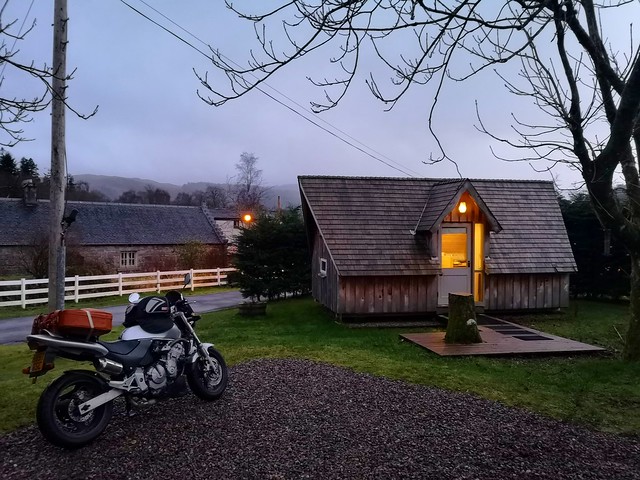 It was properly dark when we finally heard some bikes approaching and in rolled Mikey, his brother Glenn, Snake and Liall. Glenn's R80 had developed a clutch problem on the way down the road and he'd had to nurse it gently down to Strontian. Glenn can pretty much fix anything and we could have had a look at the bike in Tim's workshop, but instead we got some food and beer into ourselves before wandering along to the pub.
We woke up to more rain and the onslaught of excuses. Other Mike had been ill for a couple of days before the rally as had John, so we didn't expect them to show up. Smillie bottled it due to the weather, throwing up a few raised eyebrows questioning why someone would sign up for a winter rally and worry about the weather. Would anyone else turn up? 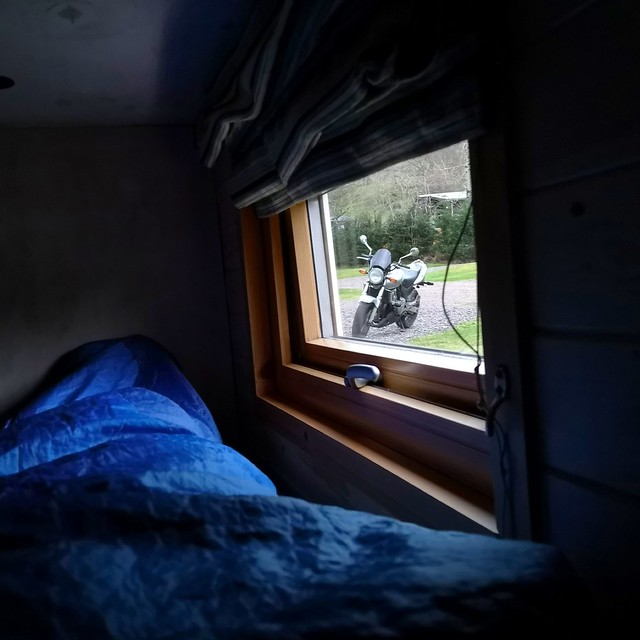 We'd all just got back from breakfast at the cafe when I received a phone call from Andrea. He'd made great time and rolled in to admiring glances to his Africa Twin from Snake and Glenn. Tim, Liall, Snake and I had decided brace the rain and to go for a run up to Mallaig. Mikey, Ian and Glenn stayed behind to inspect Glenn's stricken Beemer as did Andrea, who'd already had more than his fair share of riding in the rain that day. 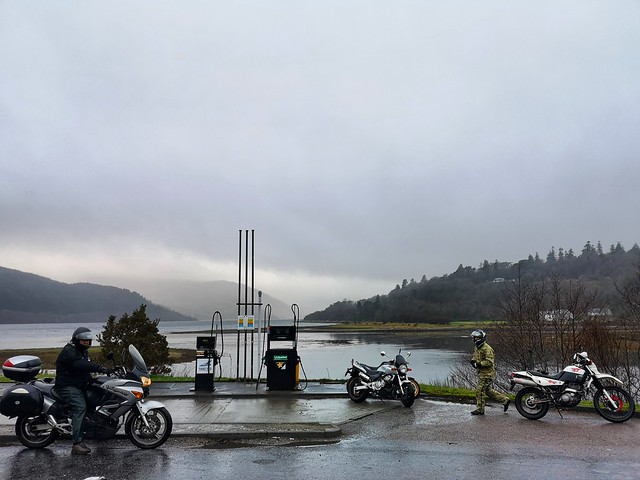 The four of us set off towards Salen then the Acharacle/Roshven road round the coast. The wee Hornet was hard work! I've gotten lazily used to the ease of riding a big twin, where you rarely need to change gear and can use engine braking more than the actual brakes. I was having to concentrate way more than usual to keep up with Snake who looked to be ambling easily along the wet, greasy roads on his Varadero. Liall, who'd left his GSXR back at the site and borrowed Mikey's XT600, was having great fun. He'd passed me and was lining up to overtake Snake when suddenly the back end stepped out, big time. He was bucked around all over the shop as the XT went into a massive tankslapper.

Somehow, Liall didn't come off. He managed to keep the XT upright and as soon as it was stable again he was back on the gas, just not quite as severely as before. Mad bastard. 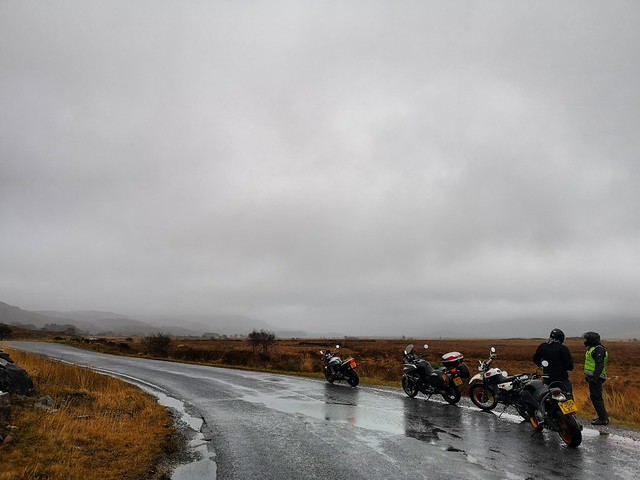 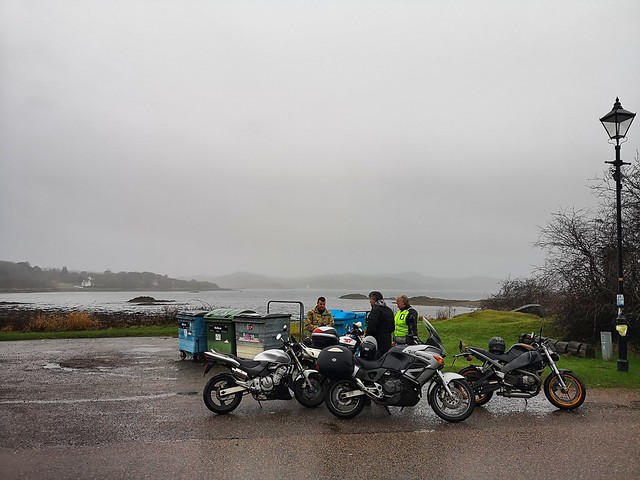 A wee stop at Arisaig gave us time to have a wee chat and for Liall to inspect his pants. Liall said he'd gotten a proper fright. He'd opened the throttle up to pass Snake and suddenly the back end snapped out. Riding behind him I'd caught the action on my helmet camera. You can't really see what happens but it was one of those moments where everything slows right down. I really thought Liall was going down, the back end kicked right out then the bike went into a wild tankslapper, bucking Liall's legs off the bike as it flapped from side to side. He did well to keep everything together and the shite out his pants. I've tried to zoom in on the video so you can see what happened, but the rain on the lens obscures it a bit. Now the XT isn't exactly a power house of a motor, so we chalked it up to a combination of shite tyres and greasy roads and carried on to Mallaig to get a heat and a coffee.

It looks like fuck all on the video but it was definitely a brown moment. 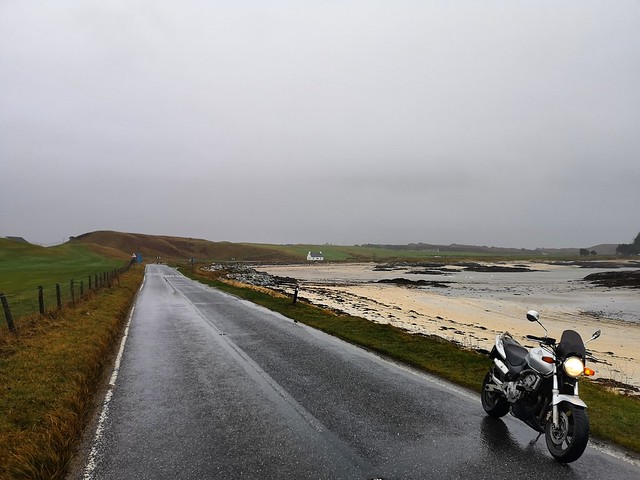 Mallaig was closed. After some wandering we found somewhere to get a coffee and tried to dry out a bit  while at the same time not flooding the shop out. Originally the plan was to head back down the side of Loch Eil but the daylight was going, increasing the chance of deer on the road. Tim led the way back at an easy pace. Thankfully there were no more brown moments. 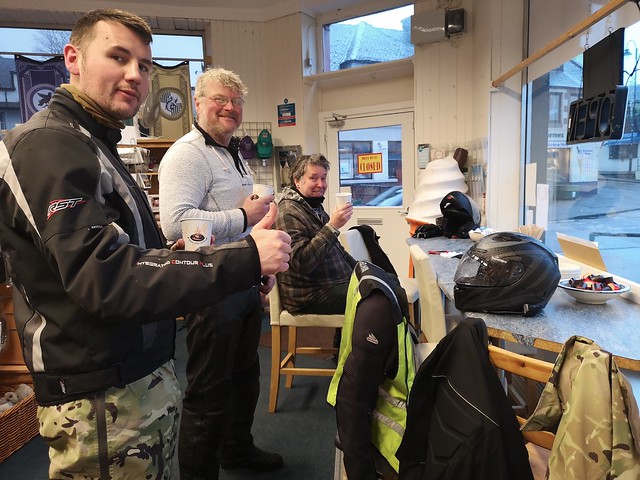 Liall, Tim and Snake in a very wet Mallaig.

It was dark by the time we got back to Strontian. Gerrit had arrived a couple of hours before and greeted us as we splashed in. The evening was spent once more in the Strontian Hotel where we celebrated Mikey's birthday (you won't believe it, but he's only 27!!!) and all had a rare insight to the bizarre Caithness motorcycle sales ring, a weird phenomena that seems to affect the north east of the country. Or maybe it's just Mikey, Glenn and Snake.... 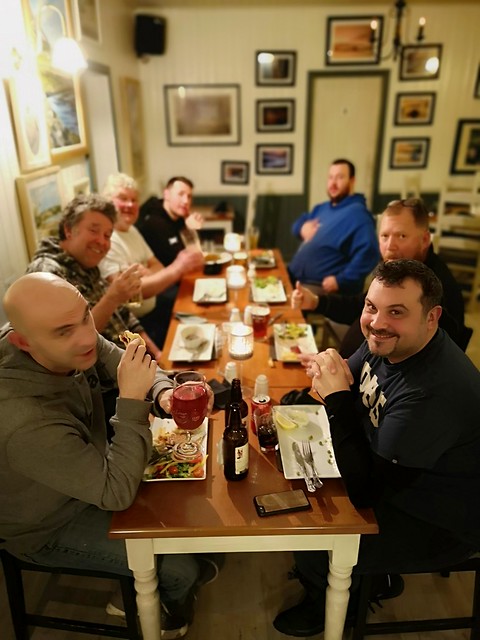 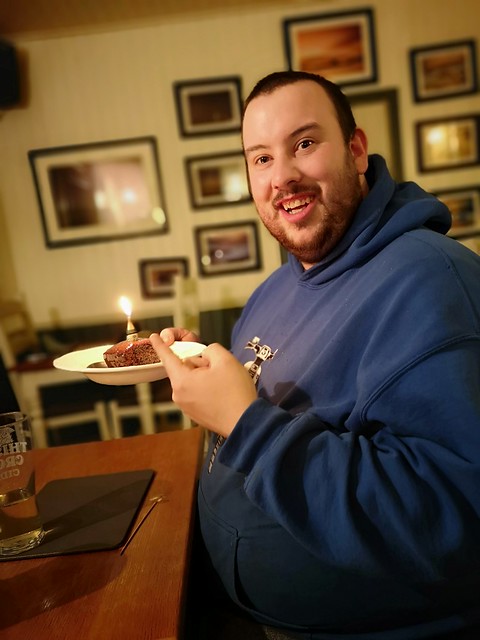 Andrea and I had a wet run home, the sun only coming out when we got closer to the east coast. Still, despite the rain we'd all had a great weekend. Everyone made it home safely, Glenn getting the beemer home without needing to call the breakdown folk and Mikey having a few more twitchy moments on the XT. 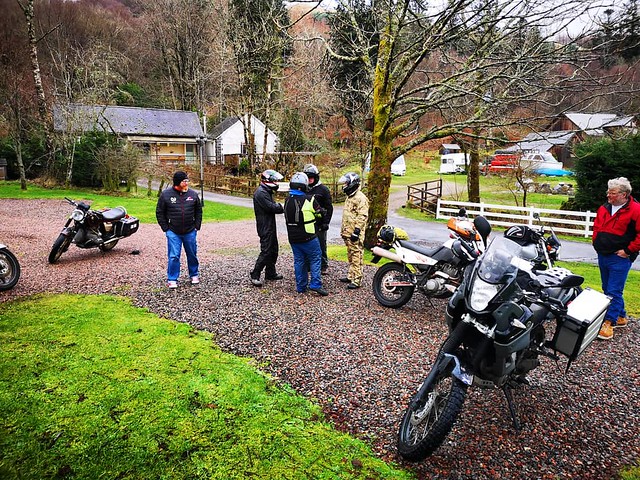 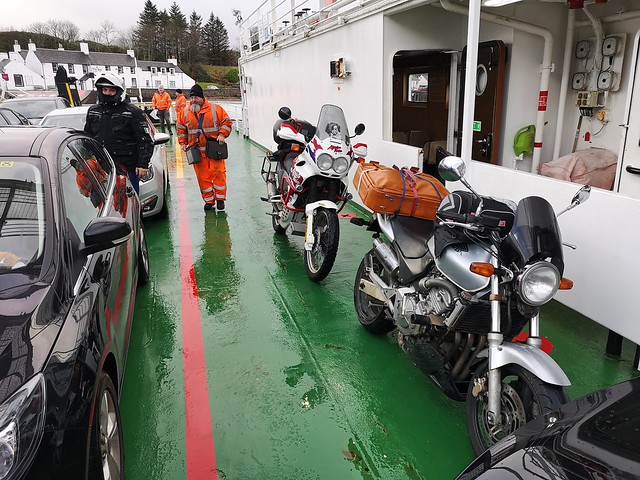