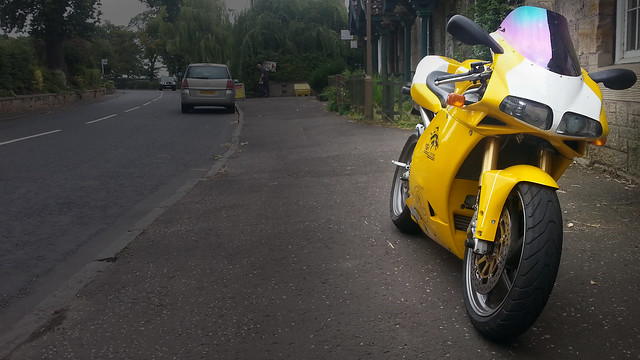 A few months back I seen a Ducati 748 in one of the bike shops in Edinburgh. With my best bullshit act I got speaking to the salesman saying I was looking for a second bike (not a lie) and I fancied a 748 (true again). I missed out the bits about being skint and acted like I had a garage full of bikes and a I wanted one more(again this is sort of true, but most of my bikes don't actually run...)

Anyway, that was back in April. the salesman was reluctant to give me a shot of his 748 on the wet roads. I tried a few more times then forgot about it.
Recently, Faithir was up at the same bike shop.

Hmmmm. I phoned them up. It wasn't the same 748 they had in, this one was a 748R. Shiver me timbers! The R has more power and better suspension. It would be good to take it for a spin, y'know, just so I can make my mind up if it's for me before I buy it *cough cough.*

"No probs." Said the Salesman, "I just have to clear it with my boss. We just got the bike in as a trade in from an Older Gentleman just recently."

After a short phone call in which the Salesman assured the boss I wasn't a daft laddie, but a sensible rider in his 40's (I'm 33) he pulled the bike out. My heart sank a wee bit when I seen all the shite stickers stuck to the side. Never mind, you don't look at the mantelpiece when you're poking the fire.
The guys at the shop gave the bike the once over and, after some trying, got it started.

If you've never heard a Ducati idling you might be in for a wee shock. Sure, the twin Temignonis give you a lovely, twin cylinder rumble but it's nearly drowned out by the dry clutch rattling around. It sounds like a washing machine full of spanners on a low spin.
Nevermind, once its rolling it'll sound ace....

Obviously the bike isn't going to be ultra comfy, the sporty riding position puts alot of weight on your wrists, but the bike wasn't designed as a sports tourer. One thing though, as i rode along Edinburgh's bumpy streets I was pretty suprised how smooth the ride was. I thought it would be crashing around all over the shop but it rode pretty smooth.
I got a bit more used to the bike as I got further out of the city. I pulled up at some traffic lights beside a young lad in a slammed VW Jetta.
"Nice bike mate! Is it a Ducati?"
"Aye. Listen to this."
I let the clutch out and his ears were filled with the sound of an Italian dry clutch.

"Holy fuck!! What the fucks wrong with it??"

I rode out of the city, heading for East Lothian where I could try the bike on roads I'm used to. The 748R is pretty quick. On the open road it sounds great, it revs up just past eleven. Quite the screamer for a twin. The brakes are awesome with loads of power and feel. With the Ohlins suspension this should be incredible. But it's not. Something's not right. It goes and stops but the bike doesn't want to turn. This scalpel has been blunted buy some halfwit who fancied themselves as Jerry Burgess. The bike even looks like its a bit too low at the back. Infact the more I look at the bike the more signs of serious abuse shine out. Every bit of the bikes plastics is either cracked or has been badly repaired. the radiator looks half fucked and there's a few gouges out the petrol tank. Along with the gash stickers Jerry had fitted an equally gash iridium screen. Not good.
The bike cut out a few times on the way back to the shop. I put it down to good old "Italian Character" but even the guys in the shop said that it wasn't right.

Still a bonny bike though. Just ignore those fucking stickers. 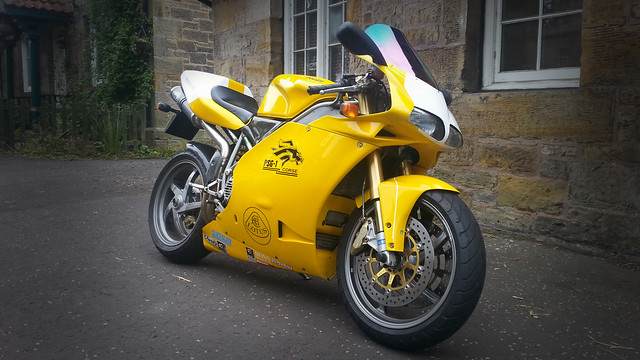