Shy Monkeys Get No Bananas

I'm in Two Wheels Edinburgh Honda a few weeks back speaking to Stuart and Robbie about their upcoming Honda demo day.

"Here, if you get me a one of those new Monkey bikes I'll fire up to Applecross on it and try and get some nice photos on the way."

It was a semi recyclable comment. I was really surprised when a wee while later I got a message from Stuart. "I've got you the Monkeys!"
Stuart had persuaded Honda to bring up not one, but two of the new Monkey bikes, just in case someone wanted to join me. Ok. I better get planning.

There were two major constraints to my trip. It was the Easter weekend, so I had plenty time off work, but I had my mate Bennetts' stag do on the Saturday night. The other was what time I'd be getting the bike on the Friday. For some reason I had it in my head that I'd be able to get the bike around two or three o'clock but after talking my plans over with Stuart it was looking like four or five was more realistic.

Okay, maybe Applecross was a bit too ambitious. Luckily I had a back up plan, Strontian! I'd just been at the Sunart Wildcat Rally the previous weekend but the weather forecast looked good and I knew I could get some decent photos on the way there. Tim and Lynn who run Sunart Camping offered to put me up too, solving the luggage and camping gear problem. All I'd need was the rucksack which I'd borrowed (stolen?) from my Uncle Greaser. I was ready.

I got the Monkey at five o'clock. It only had eleven miles on the clock and came with a fuel tank of fuel, a perfect start to the trip. In no time I was out of Edinburgh and on the motorway. A Monkey bike is never going to rip anyone's arms out their sockets. The 125cc engine it shares with the Grom only puts out around nine horses but  it had enough grunt to haul my sixteen stone arse around. I was quite surprised by the ergonomics too. I'm 6'4 and I didn't find the wee bike cramped at all. On the motorway I was cruising between 55 and 65 mph depending on hills, I even topped out at an eye watering indicated speed of 72 mph. 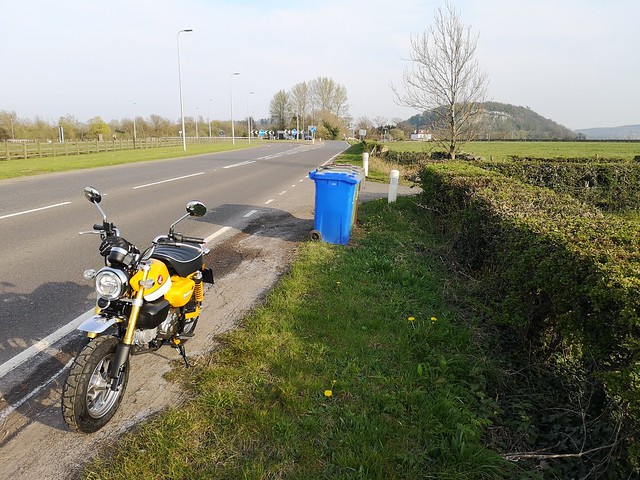 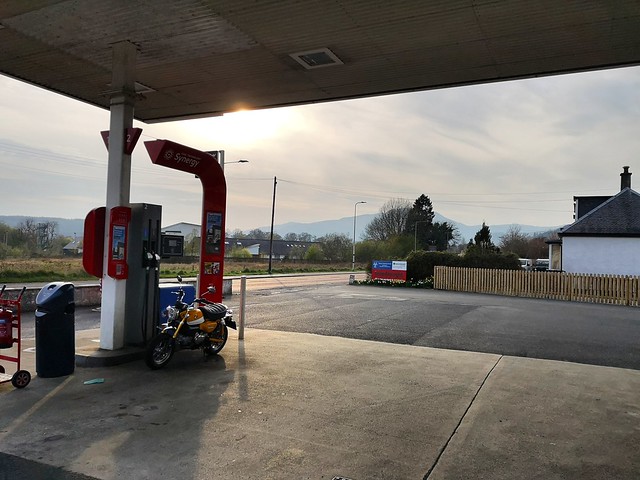 Motorway section over, I turned off and headed for Callander. MCN's website had claimed that the Monkey would be getting something like 180 mpg. Now it may have been my bulk, but the Monkey I was on did not have a 230 mile tank range. After the 60 mile trip the wee fuel gauge was showing less than half a tank. I brimmed the tank (£4) and set off once more. I had been slightly concerned about holding up the traffic away from the dual carriageway but thanks to the horrific driving standard on the A84 and A82, combined with a police force who cares much more about speeding than road safety, I was no where near the slowest thing on the road. I even overtook folk. The looks on the faces of the folk I was overtaking was hilarious. Although the fact that they were driving at 30 up a main road, snaking around and oblivious to the huge queue of traffic behind them makes me think they'd had a few sherbets earlier on. 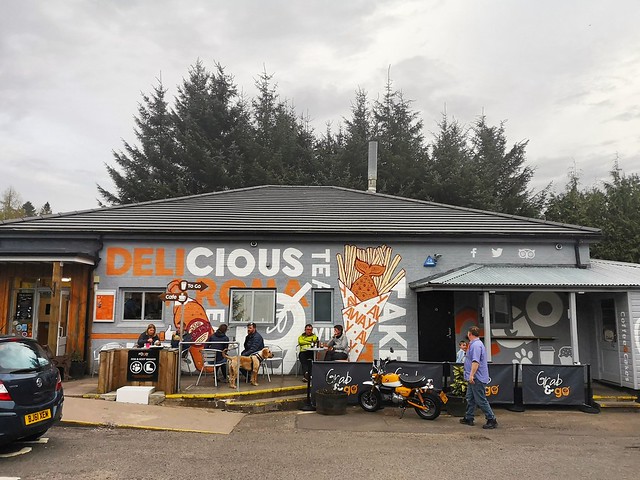 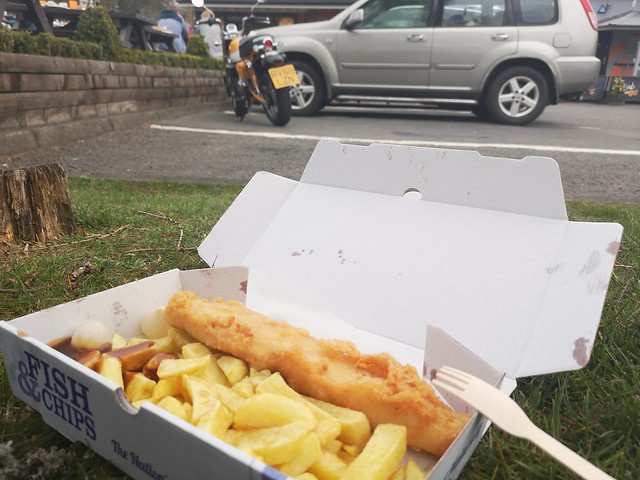 I stopped in Tyndrum for some tourist tax fish and chips. When you stop anywhere on the Monkey bike its not long before folk are round the bike having a wee look. Everybody loves a Monkey! I chatted with a few folk while others just waved or laughed. I must have looked some sight riding off towards Glencoe. 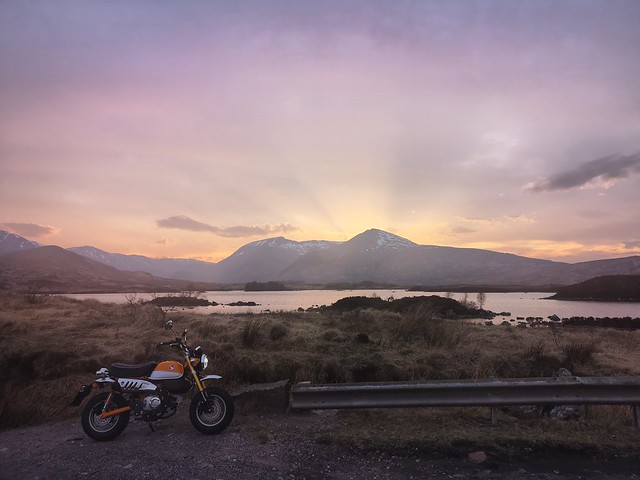 As the sun went down so did the vast number of licenceless or intoxicated drivers wobbling all over the road. The wee Monkey was buzzing along grand. The only gripe was the soft seat was beginning to hurt my arse and my bulk was overwhelming the suspension somewhat. Minor grumbles aside, Honda's Monkey is a nice place to be. The clocks are cartoonish and funky looking while being easy to read. The brakes haul the bike up good enough when aforementioned shambolic drivers perform an emergency stop for no apparent reason. Despite the limits of the suspension I could chuck it about on the bends too. I was making good time, but was aware that the light was going and when the sun goes down up here there's more chance of coming across deer on the road, plus I didn't want to miss the last Corran ferry. So I juggled a fine balance between speed and safety (flat out). 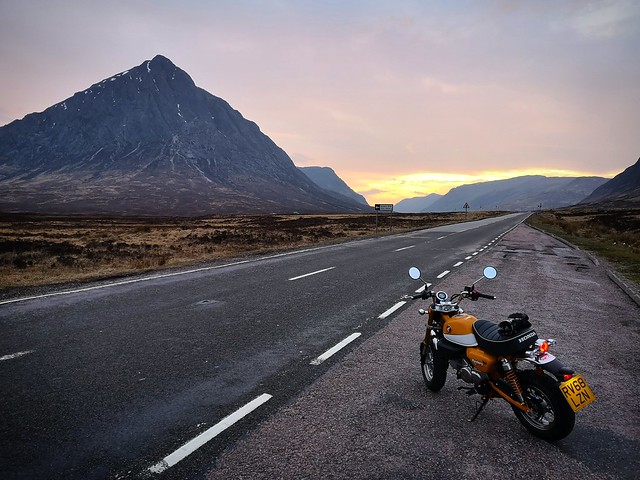 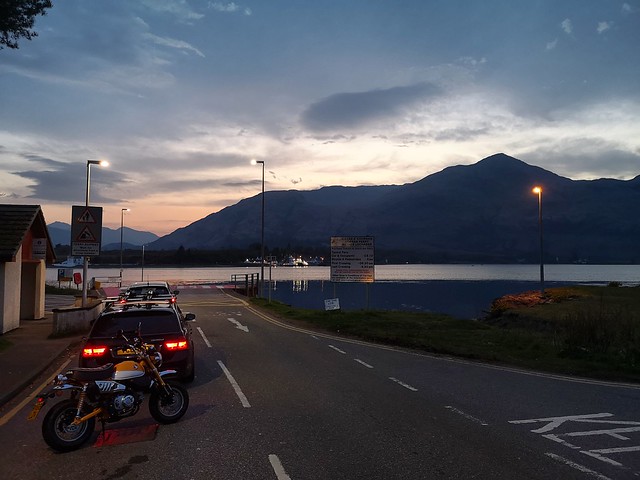 I made the second last Corran ferry with time to take in the tail end of the sunset. The crew on the boat had a good laugh at the Monkey and the fact I'd ridden it up for a night. They could remember the original Monkey bike and really thought the new one was smart. Once off the ferry it was a dark 12 mile dash to Strontian. The wee headlight on the Monkey is pretty good, lighting up the sheep on the road and deer jumping about with plenty time to react. I got into Strontian at around half nine. I could have went straight to Tim's, but the lights in the pub drew me in, making me stop for a celebratory pint. 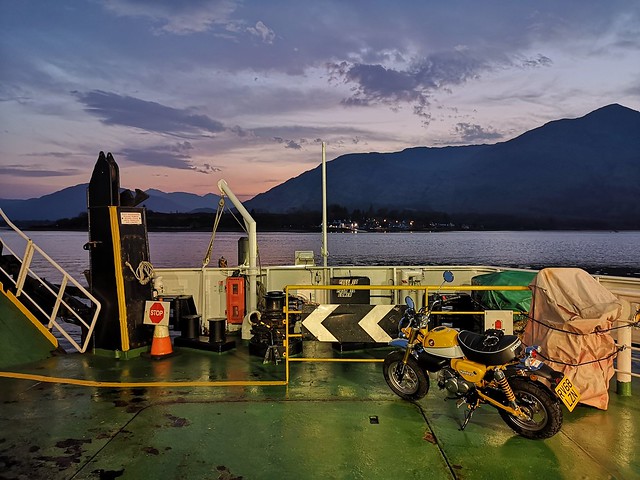 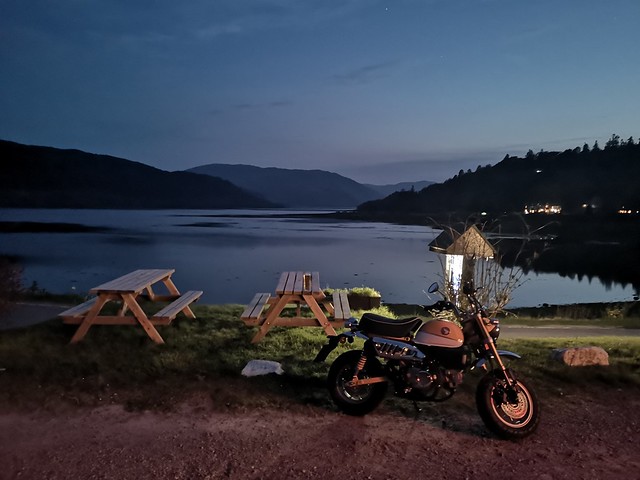 The folk in the pub were surprised to see me, after all I'd just left a few days before.
"Come and see what bike I've got"
They all thought it was hilarious!
When I arrived at Tim's I found him worriedly phoning around to see if I was OK, sorry Tim! The bike was put away and my gear dumped off and we wandered back round to the pub for the evening.
There was a bunch of guys up at the campsite from the ABR forum who we'd been speaking to the night before; it's always great to speak to folk who are so enthusiastic about visiting Scotland. I got a photo of the wee Monkey besides their big bikes and joined queue for fuel. It was a great day and I got some nice photos on the way down the road, even if they were only with my phone. 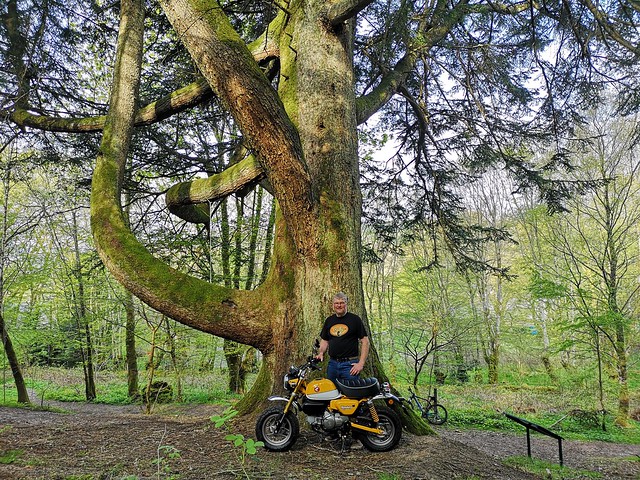 Tim and the Monkey 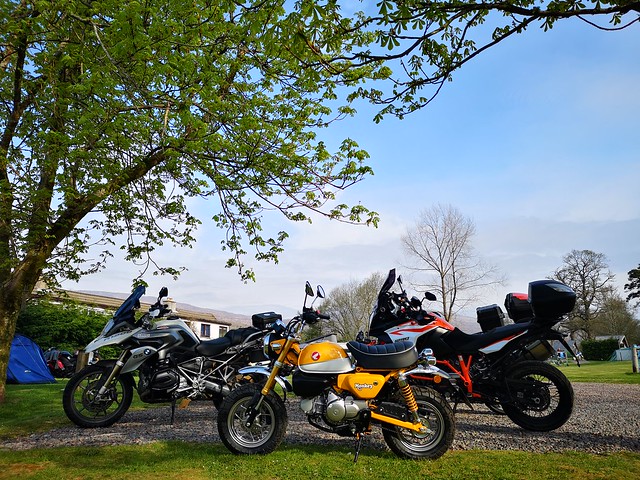 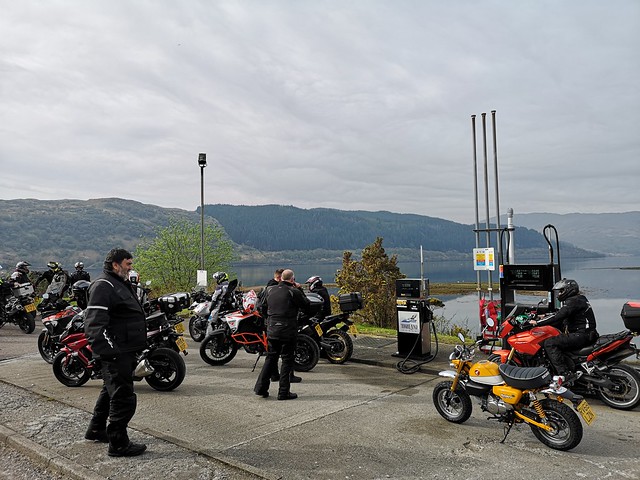 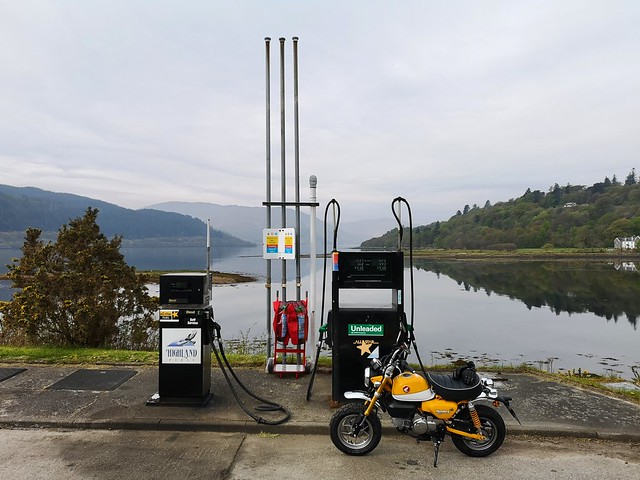 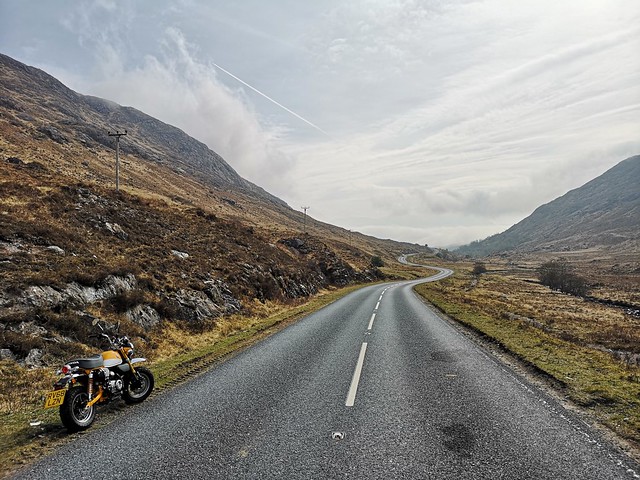 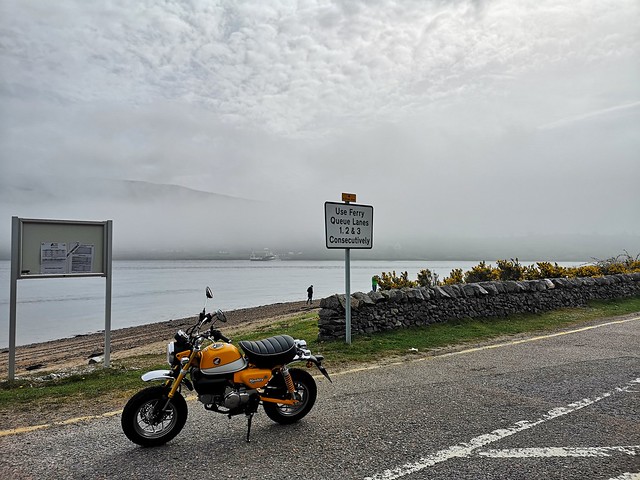 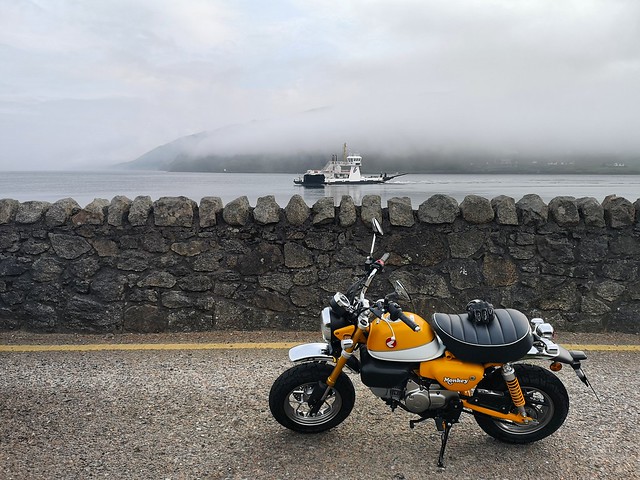 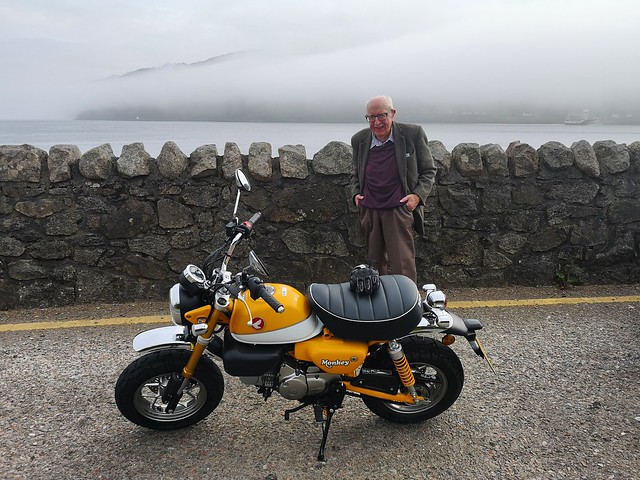 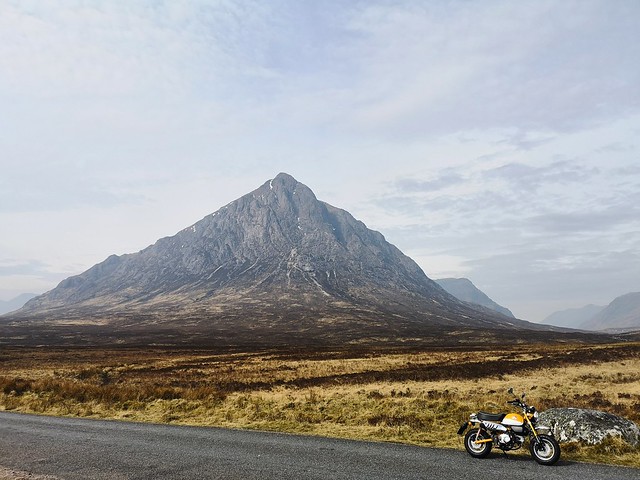 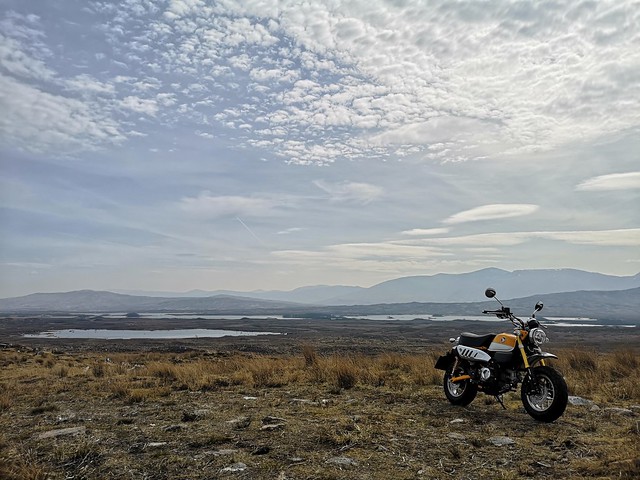 I got back to Two Wheels Edinburgh Honda around two. The demo day was in full swing. I thanked the guys from Honda UK and the guys from the shop for arranging the bike for me, met up with HB, grabbed a quick bike to eat then headed off to Bennett's stag do. Job done! 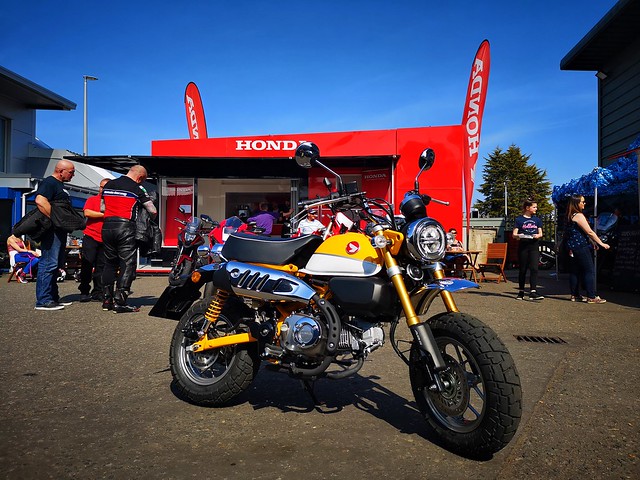 Final thought's on the Monkey? It's definitely a cool wee bike. As a second bike it would be great wee thing to have. Ideal for going in the back of a motor home or something. It would be great for cutting about the city, although you'd have to make sure you had secure parking, especially in Edinburgh. It looks great, goes and stops well enough and has cool wee touches, like the way the cartoony clocks blink at you when you turn the key. The seat is a bit soft resulting in a sore arse after a couple of hours, but I doubt the average Monkey rider buys the bike with the idea of touring on it. Overall riding the Monkey is a good place to be and a nice experience. If I had the money I'd have one in a heartbeat. 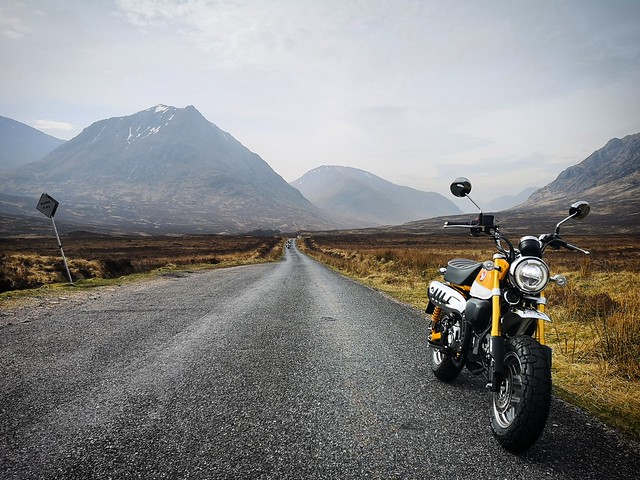 Big thanks to Stuart at Two Wheels Edinburgh Honda and Honda UK for the Monkey Bike.