End of Summer in the Alps, Part 1.

Black Friday. It's just passed. Some people love it and some people hate it. This time last year HB and I landed a cracking deal on the Newcastle to Amsterdam ferry cementing the Alps as our summer destination once more. We were joined by Aidan and Jess who were riding Aidan's Triumph and Joe and Liz in Joe's Beemer E36. This trip was gonnae be more a holiday than an endurance event and for the first time ever I had booked accommodation in advance. This is something I'm usually against, but due to closed campsites and some special locations it was necessary, you'll see what I mean. Route planned and bikes packed, we headed down to the ferry, stopping at Carter Bar, on the Scotland/England border to show Jess, who'd never been there before. It was around this point that I realised what had been causing my niggling "what have I forgotten?" feeling. I'd not packed my pants (underwear to you American readers.) FUCK!! 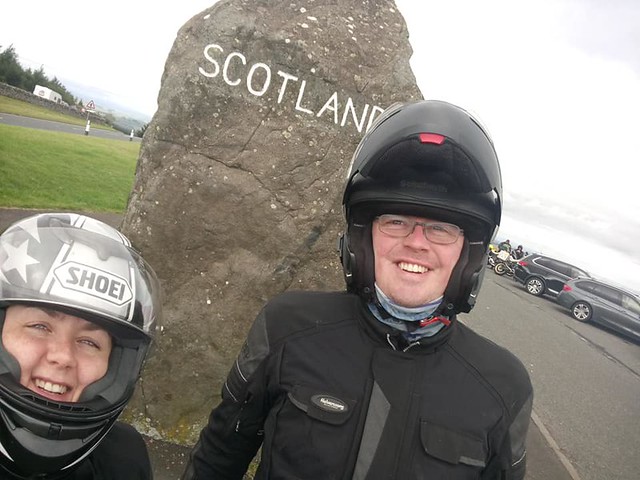 We stopped in a nice wee English town for a bite to eat and I frantically searched for some boxer shorts. The guy in the ship said there was a big shopping centre right beside the ferry port. A hour or so later I was happily re stocked in the underwear department. Sorted. Once we were off the ferry we followed a familiar route down to Luxembourg, stopping to meet up with Joe and Liz in a petrol station. We had all booked into hotels in Vianden as the campsite is now closed, which is a shame, as it's a great wee town and an ideal stop if you're heading from Ijmuiden to the Alps or Black Forest. Satnav roulette was played due to a road being closed for an event. This gave us an enjoyable spin into the town along a route we'd not taken before, a twisty, well surfaced road that's really popular with bikes. In no time we could see the castle that sits above Vianden and stopped for some photos and a wee chat with some of the local bikers. 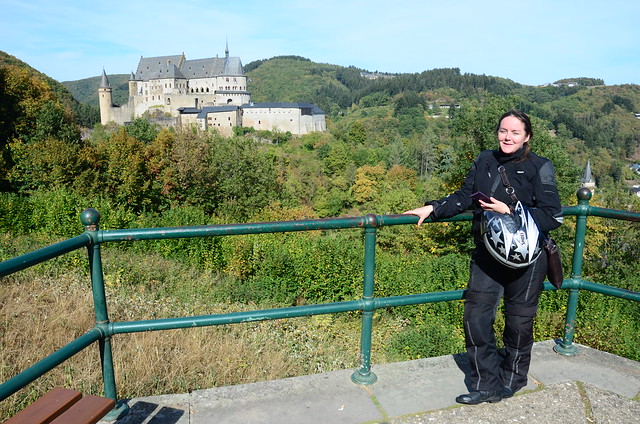 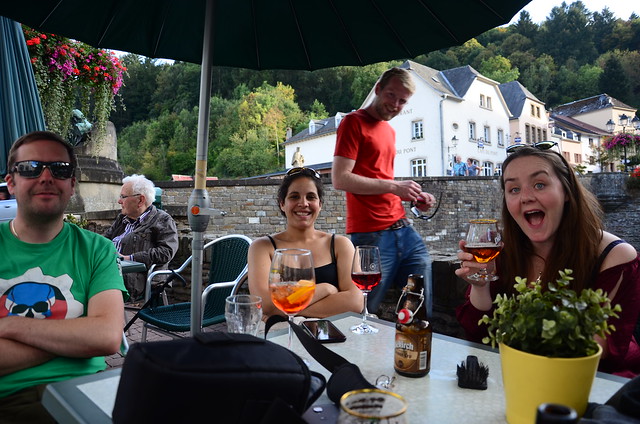 HB and I had booked into the Hotel Victor Hugo. We'd stayed there before but this time we had a room with a balcony which gave us a nice view over the river. It really is a nice place to relax. You've got a good choice of places to eat and drink and there's plenty places to see if you fancy a walk after dinner. (which I was far too lazy to do) 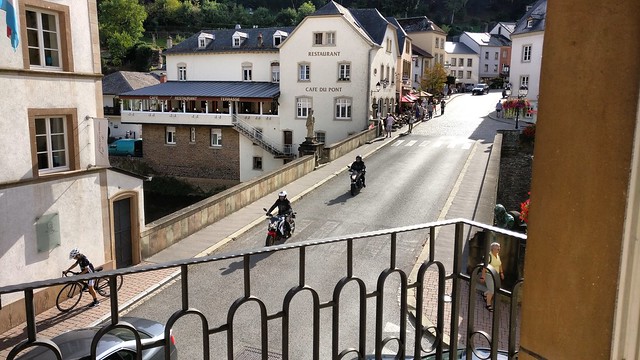 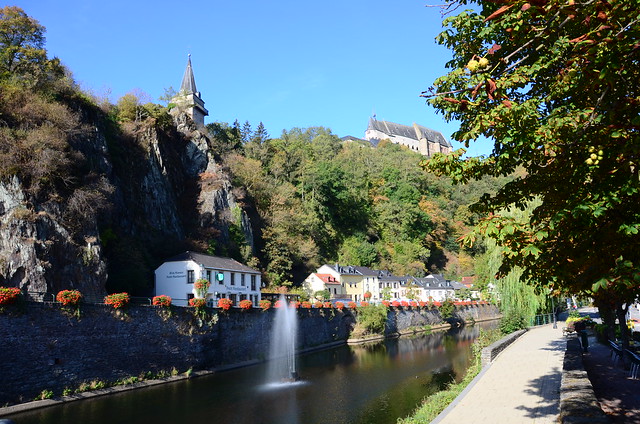 We set off early the next day, an hour’s blast on winding roads far more enjoyable that the French piage and N routes that followed. About 3 hours saw us at the Vosges, home of the cracking Route Des Cretes. I had ridden the Route Des Cretes a few months earlier and really enjoyed it. If you have the time on the way to the Black Forest or French Alps it really is worth the detour. 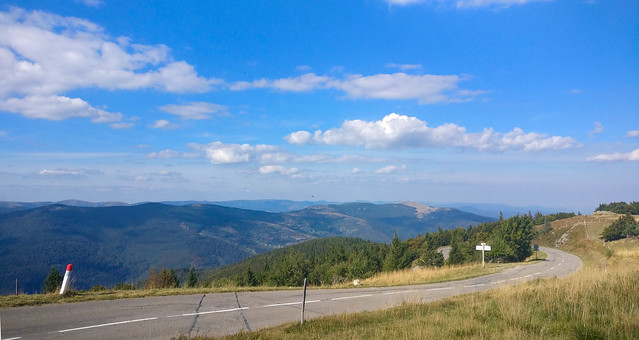 Aidan and I had lost Joe a bit earlier and HB and I lost Aidan and Jess just as we got into the Vosges. Everyone had their own sat nav so there was no worries about everyone finding their way to Rick and Andrea’s place where we were staying that evening. The Vosges did prove a bit harder to navigate that I remembered however. HB and I were fine, but Joe, who’s usually never lost, ended up over on the next hill, missing the Grand Ballon pass all together and we’re still a bit unsure what route Aidan took. HB and I stopped at the top of the Grand Ballon, there was a car rally on and quite a few nice motors parked up. We had a bite to eat and took in the views before heading down to Colmar and into Germany. Since spending a couple of weeks cat sitting at Rick and Andrea’s I’ve gotten to know the Rickenbach area quite well giving a familiar Black Forest ride. I was quite surprised that we were the first to arrive, but within the hour Aidan and Joe had found their way. Another night at Stefan’s Pizzaladen followed by some schnapps and star gazing around a Swedish candle. 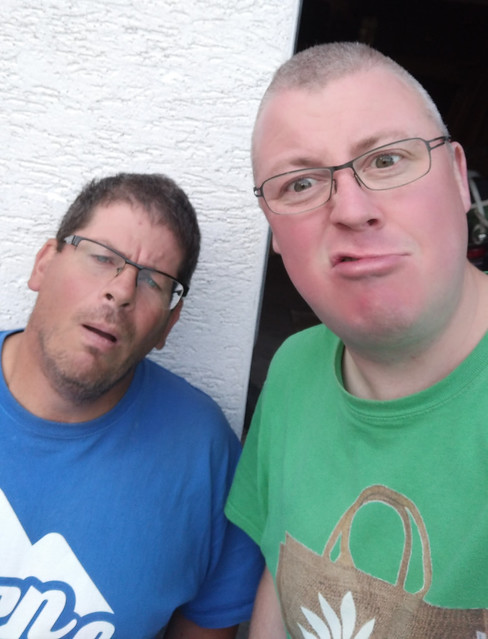 We had a delicious breakfast on Rick and Andrea’s balcony and Joe made some slight adjustments to his car the following morning, by adjustments I mean he changed the whole rear suspension. With only minimal help from Rick and myself Joe had it all done in about an hour, a job that would have probably taken me half a day. Joe now happy with the handling of his beemer we set off, only stopping for a wee bit at the Swiss border to pick up a vignette. We battered along Swiss motorway for a couple of hours before grumbling bellies required filling. I was convinced that we were only a short distance away from Austria, but Swiss Burger King was looking just too good for everyone else. Fast food with rosette prices is still fast food, but it filled a hole. There was also a mild exchange over navigation. We were all using different sat navs which each gave slightly different routes. I thought that if we took slightly different routes that was fine, while Aidan preferred to ride as a group and Joe being easy either way. I’d spent a fair bit of time looking at different routes on the map and had a good idea of where I would like to go and what I wanted to see, but agreed that we’d ride as a group to Austria. We’d all booked hotels for a couple of nights in Sölden. The original plan had been to stay in wee cabins on the campsite, but it was closed. 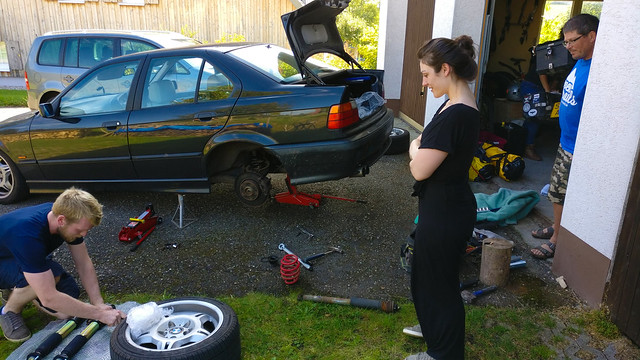 We left Burger King with Aidan leading, the turn off for Austria was only a few miles ahead but when we got there Aidan looked as if he was carrying on. I waved like a loony and indicated but I couldn’t get his attention. Joe was behind me, also indicating in an Austrian direction. Time to make an executive decision…. I turned off towards Austria.

Once over the border we pulled into a petrol station to get a vignette. Vignettes are like road tax and are needed in Austria and Switzerland, although I think they’re only a legal requirements if you’re riding motorways and other main roads. As we headed higher into the hills it began to grow darker. There were a couple of big flashes of lightning and it grew darker still, then the rain came. Rain in the Alps can be torrential. It wasn’t long until the roads were literally flowing like rivers and it was nearly as dark as night, I was toiling to see where I was going with all the spray and glare from oncoming headlights. The road up to Sölden would have been a good one in the dry, but by the time we rode through the third or fourth wee village I was just wanting to arrive. I was glad we had booked a nice warm hotel rather than pitching a soggy tent. We arrived in Sölden just as the sun was coming back out. It was mental how dark it had gotten when it was raining, but now the sun was back out and daylight had returned. Hotel Marco gave us a great view over the valley and the town. The smell was incredible too. Alpine fresh! 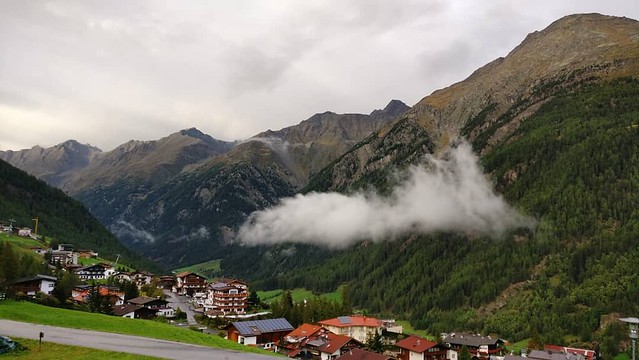 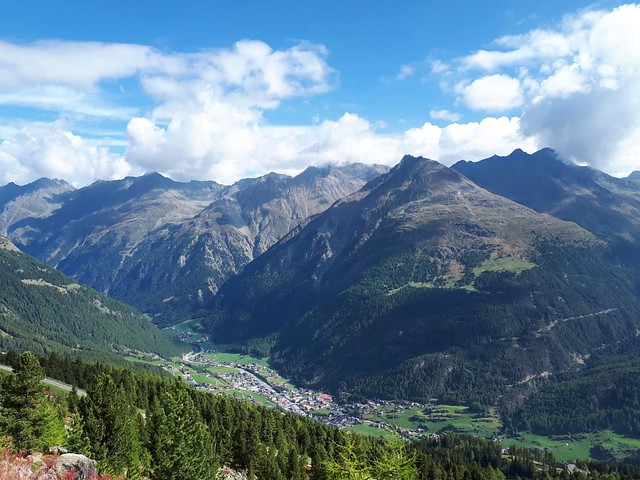 Aidan and Jess had booked into a different hotel than us. We’d stopped on the way up to send text messages and leave voice mails for them telling them where we were. There’s more than one Sölden and I was really hoping Aidan had put the right one into his satnav. He had, a phone call confirmed that they’d also got caught in the rain. They were both soaked through and needed to warm up before we all walked down the steep hill into the town.
We had two nights in Sölden, my reason for spending two nights there was to have the chance to ride the Ötztal glacier road. The sun stayed shining on Sölden the following day. After breakfast HB and I jumped on the Africa Twin and followed the road up to the glacier. Climbing steeply out of Sölden, the Ötztal glacier road is one of the highest paved roads in Europe. It’s a dead end route that finishes at the glacier itself. Towards the top you get great views of the glacier and down the surrounding valleys. If you ride up you can explore a few dirt roads to get some better views and there’s a tunnel that takes you through to the other side of the hill. Once we were finished exploring and taking photos we parked the bike up and took the gondola further up the hill. I could really feel the altitude in my breathing but the views were absolutely stunning. It’s worth giving yourself a couple of days in Sölden so you can experience it. We had a bite to eat and a beer (alcohol free for me of course) in the café before riding back down to hotel Marco in Sölden. Everyone else were doing their own thing so we had a wander around the town and some more food and proper beers before seeing the evening out with everyone else. 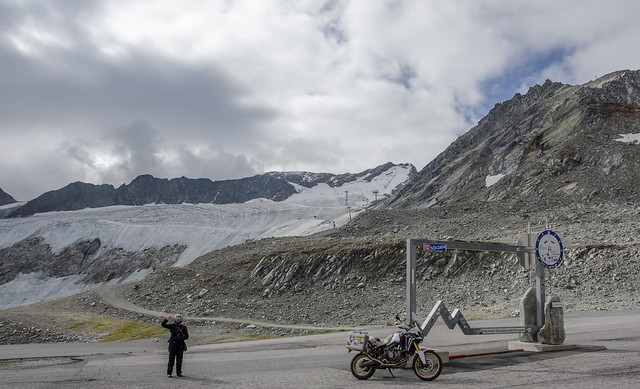 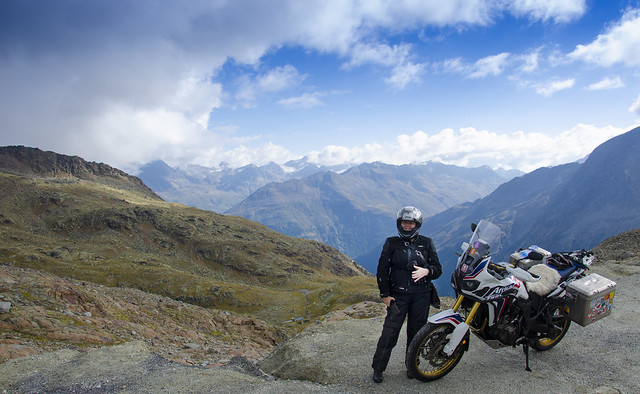 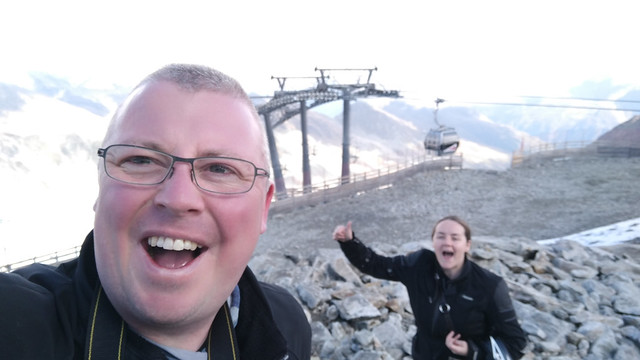 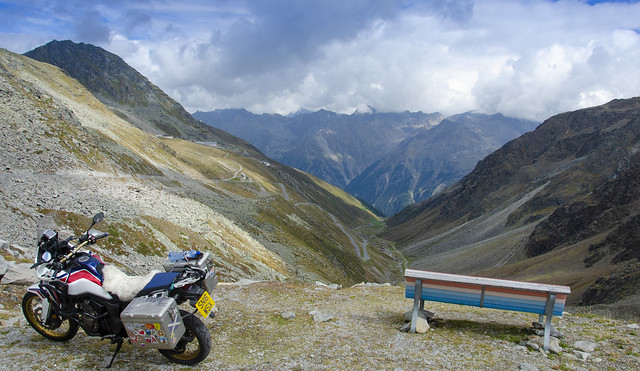 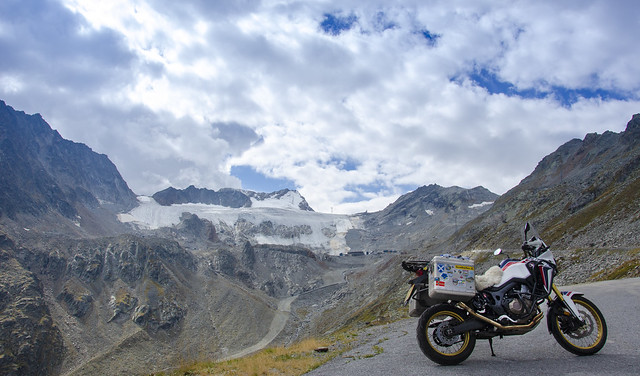 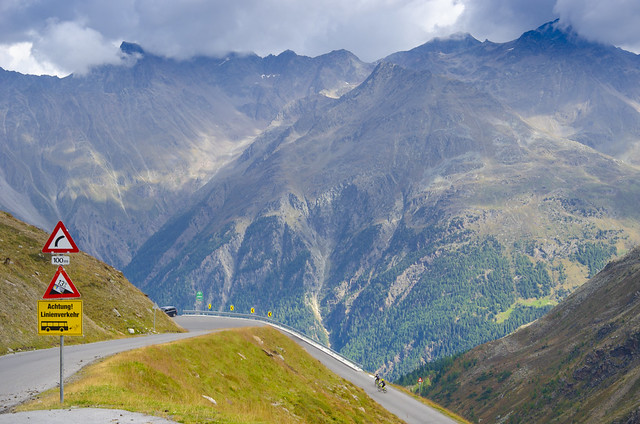 Heading south out of Sölden took us over the Timmelsjoch, a mountain pass that crosses the border between Austria and Italy. Before you get to the bordrer on the Austrian side is the Top Mountain Motorcycle Museum. This was my second reason to spend two nights at Sölden, I’d never ridden the Timmelsjoch before and having an amazing bike collection on display halfway up was the icing on the cake. The pass itself is a toll road, costing 14 Euros to head one way (its 19 for a return) meaning it’s pretty quiet compared to the other popular passes and the road is well maintained. The toll is payable from the museum, so you don’t need to pay if you’re heading up from a visit from Sölden. Aidan and Jess weren’t fussed for looking round the bikes in the museum so he and Jess headed of over the Timmelsjoch while Joe and I stumped up the 10 euro to get into the museum. If you’re into bikes, especially rare, old bikes then you’ll love the museum. Joe and I spent about an hour wandering around the main, open plan room. There was a bunch of Brough Superiors, a Flying Merkel, an Indian Four, a Munch Mammut… The list goes on. Eventually we met HB and Liz in the café and headed up the Timmelsjoch towards Italy, stopping at the top of the pass for the usual photos. 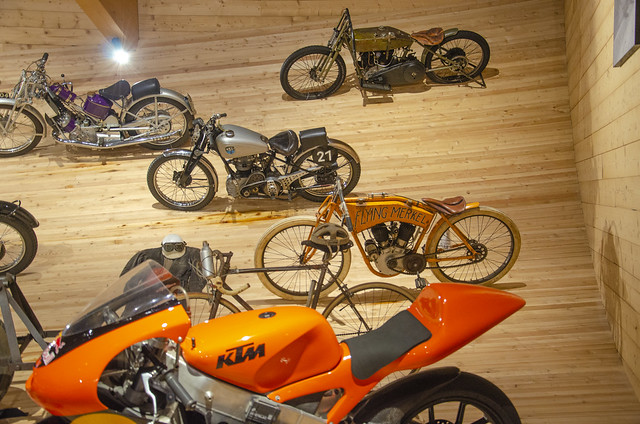 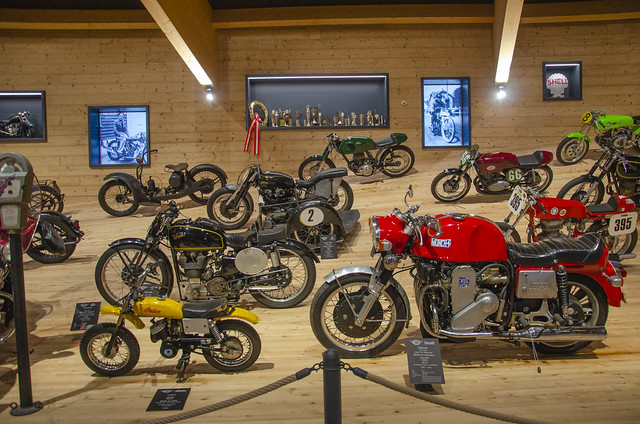 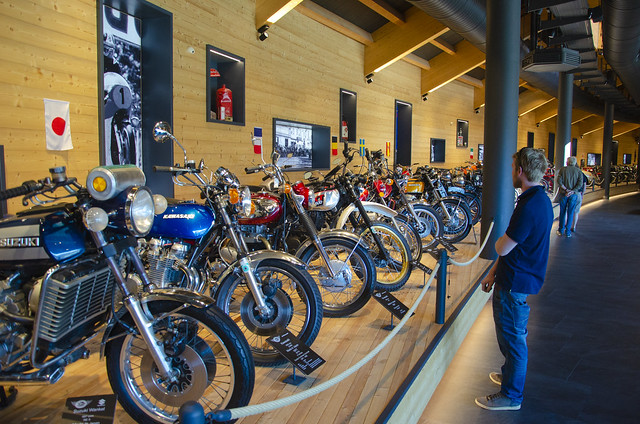 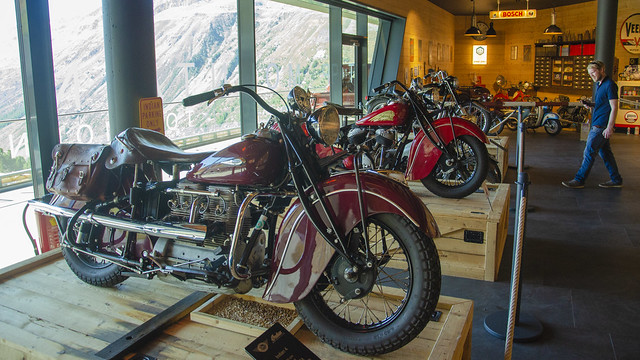 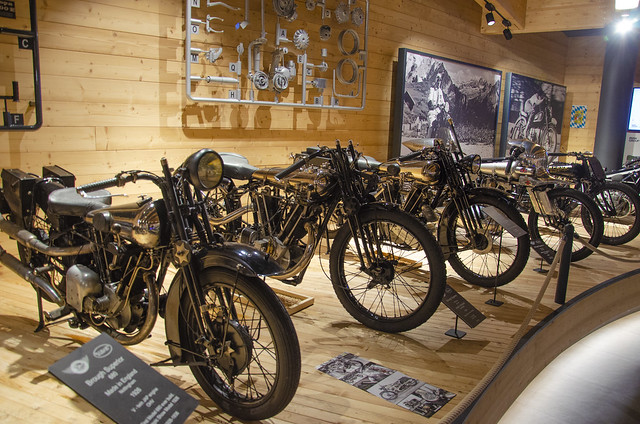 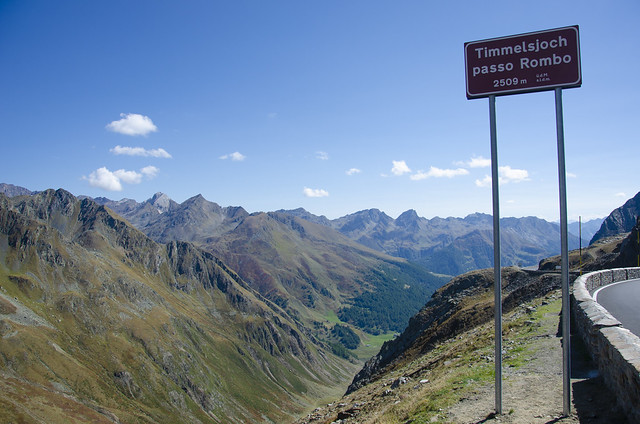 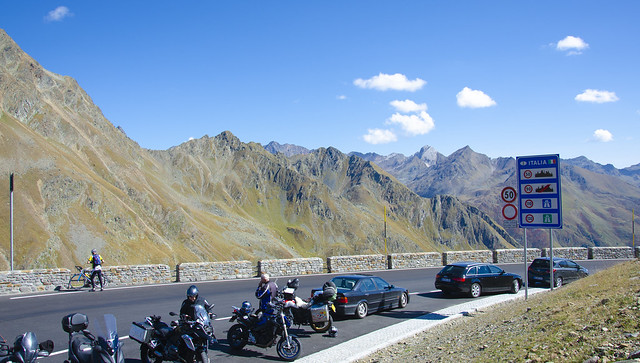