"That would make an ideal Adventure Training area."

It stuck me as a strange statement. I wondered what the fuck an adventure training area was. Said statement was a reaction to a video I'd sent someone to show them an area where folk ride dirt bikes a few miles from my house. How travelling a few miles from my house and riding around for half an hour equals an adventure was a bit beyond me, but I realised what he meant. He meant off road riding.
Now, there's a bizarre movement in the motorcycle world where people confuse the terms "adventure" and "off road". BMW's GS was probably the first victim, but loads have followed. People with a poor understanding of physics are now arguing with anyone that will listen that their Africa Twin is a dirt bike. They ignore anyone who points out the fragile plastics, vulnerable engine casings, under sprung suspension, massive repair costs and the fact that anything that weighs over 200 kilos is crap on anything properly steep. Instead they showcase various very skilled riders on youtube videos and say their smashed bikes are actually showing "battle scars" and aren't wrecked hunks of shite.
Now, if you want to ride your Africa Twin off road that's fine with me. It's your bike and you're free to do with it as you please, but don't go telling other folk, especially new riders (who seem drawn like a magnet to "adventure bikes") that their 10 grand, 200+ kg bike is a good dirt bike, or we'll have even more people complaining on the internet that their "dirt bike" is broken and is going to cost the price of an actual dirt bike to fix.
Ok, rant over. I decided to get myself a dirt bike. The Hornshit just wasn't cutting it. Towards the end of winter, especially around February and March I seem to get very, very bored very, very easily. I need something that would deliver the right goods. The Hornshit was fast enough, but on a wet, greasy day it wasn't inspiring me to get out the house. I know about a classic Honda XL600, 1984 model that was going for sale locally. It was an OK price and in good condition, but it had a wee crack in the crankcase where it had been battered by the chain at some point. I was trying to get in touch with the owner when Faithir showed me an advert he'd seen in the Lothian and Borders Classic Motorcycle club magazine for a 1996 Honda XR600R. The real deal. A proper big traillie. It was at the very limit of my budget but was in amazing condition and practically one owner from new. Money was scrounged and borrowed and I bought it. 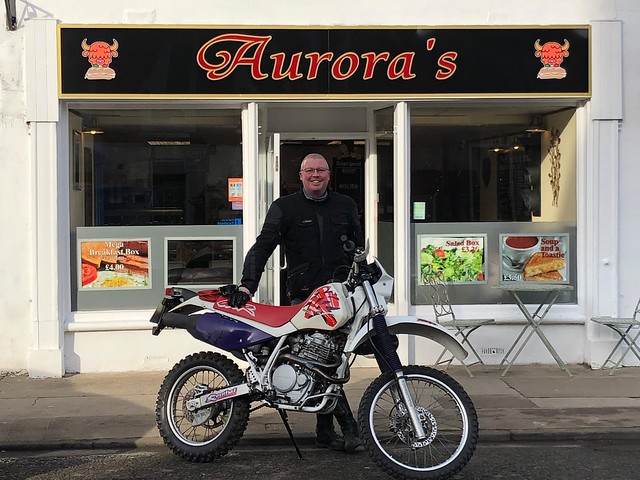 At 145kg wet its still pretty heavy for a dirt bike, but it's got bags of grunt and feels like it would ride up the side of a house. I spent the following few weeks exploring where I could and popping crap wheelies about the place. Old Mike (I'm sure he loves that handle) joined me on his TTR one afternoon and we had a great time spinning about the local trails. You'd never have thought it was still winter. 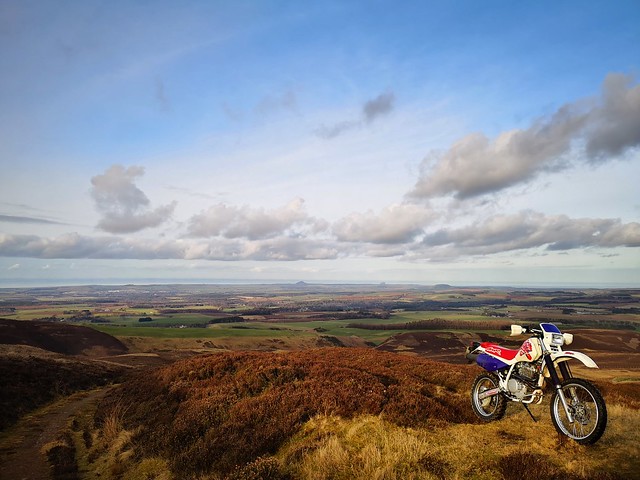 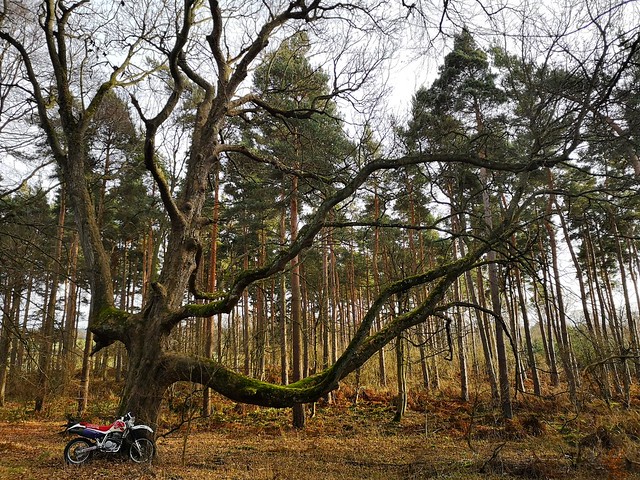 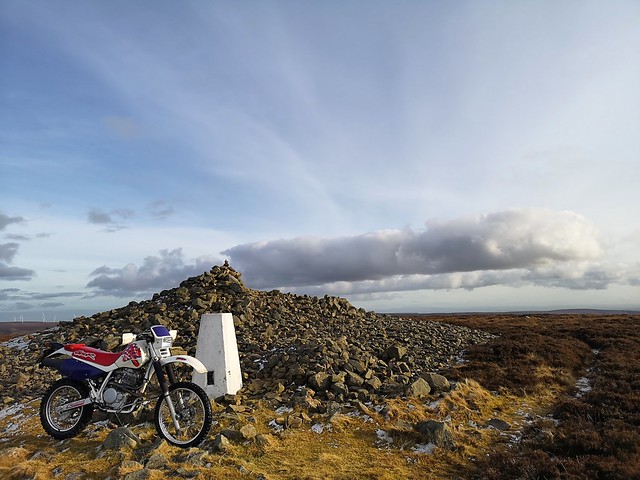 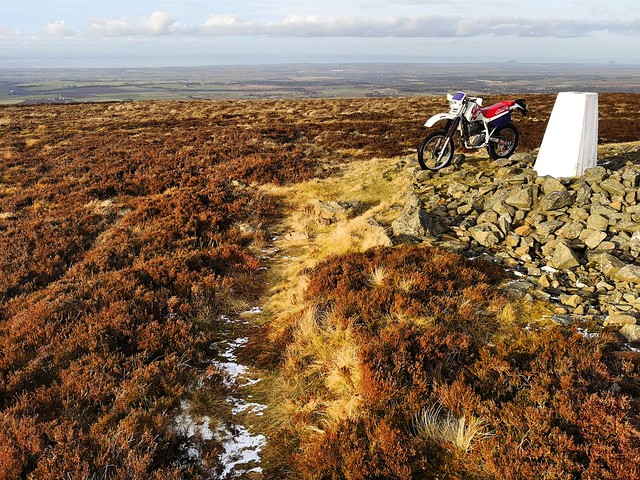 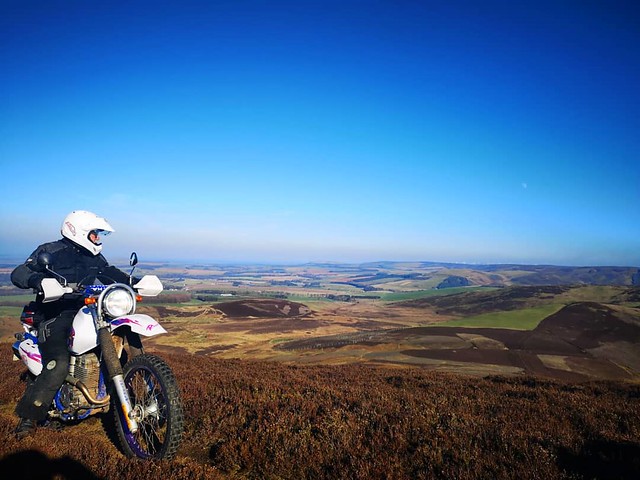 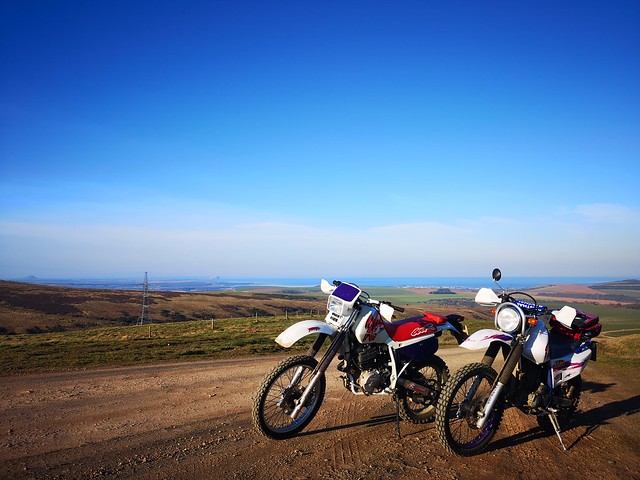 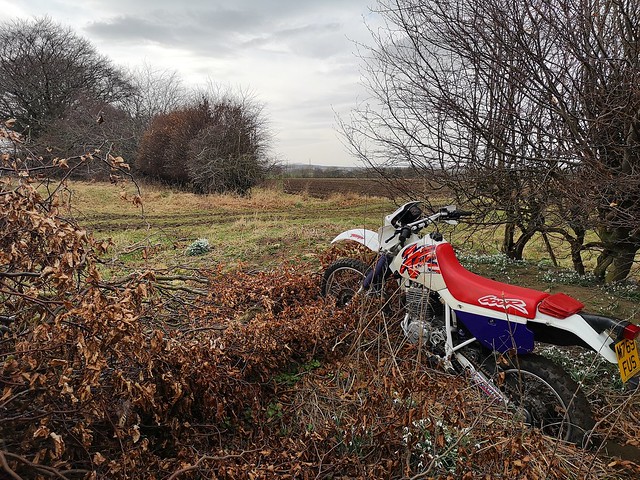 See that last photo? You probably can't tell but the bike is stuck on quite a sizeable pile of concrete blocks covered in branches. The back wheel dug itself in when I tried to gun it over and that was me, grounded. I had to lift the bike over it all because I was on my own. I was curious to see what the GS/Africa Twin/Super Ten etc brigade would do in such a situation. Some suggested using a winch or similar to get the bike over while a few others said they don't go out alone, which I guess it pretty sensible. Some said they just ride easier trails. I think when folk are saying they go off road, they just mean "off tarmac" like the road in the picture below. 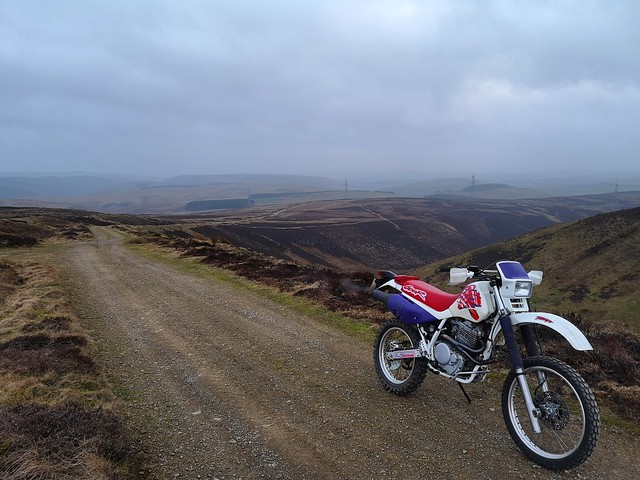 Anyway, I was really happy with the XR, but it sounded a bit lame. The previous owner had informed me that it was still jetted for a free flowing pipe, but had fitted the standard one back for the sale as the link pipe for the Supertraap can had rusted away and the titanium Remus system was too loud. How loud is too loud? I guess we'll find out when I fit it, I'll just go for another wee spin first. 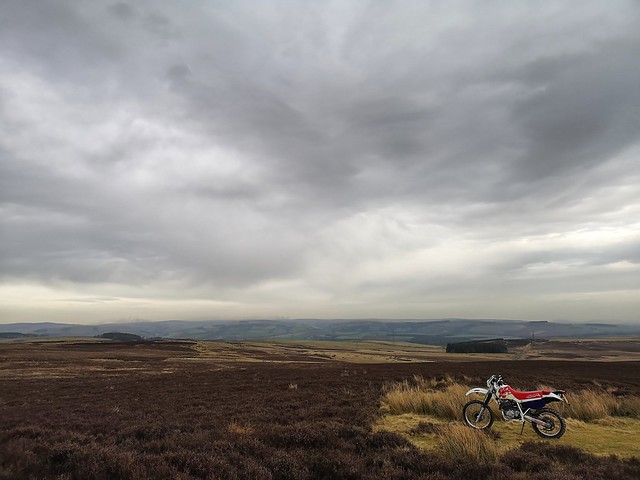 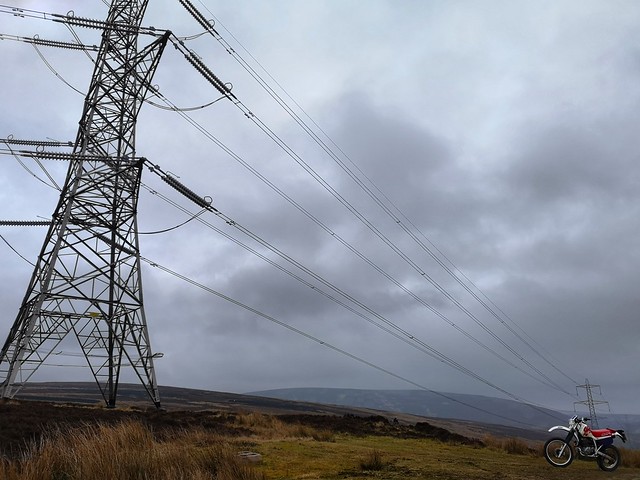 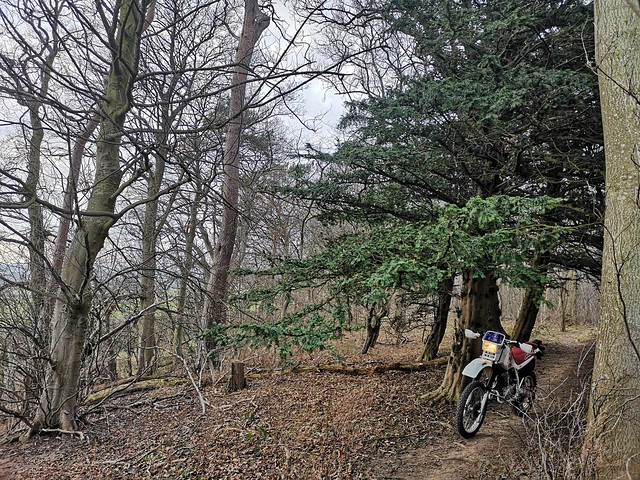 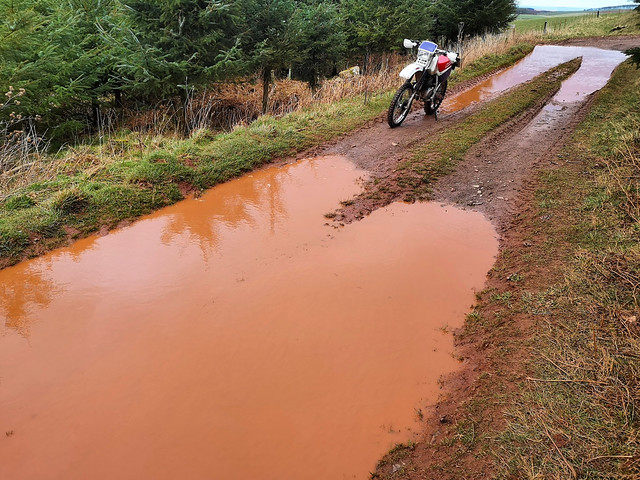 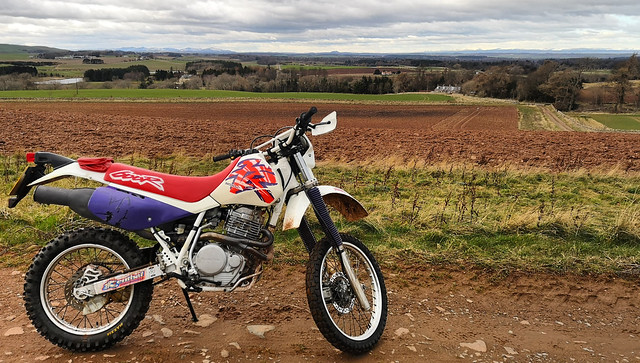 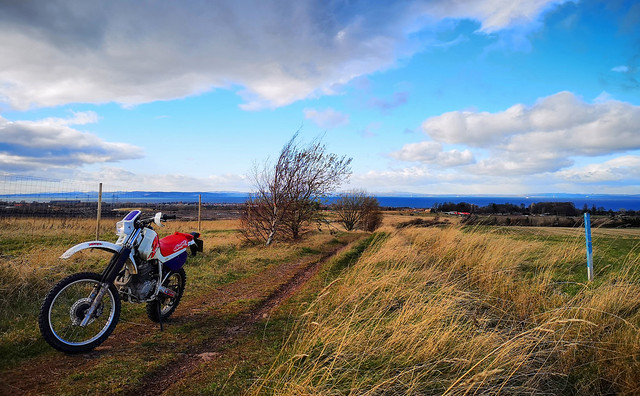 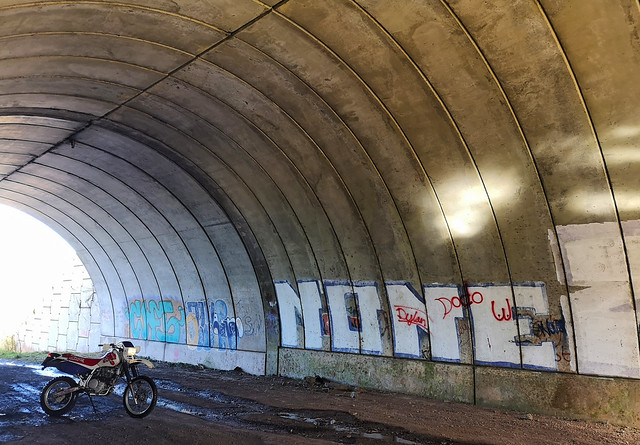 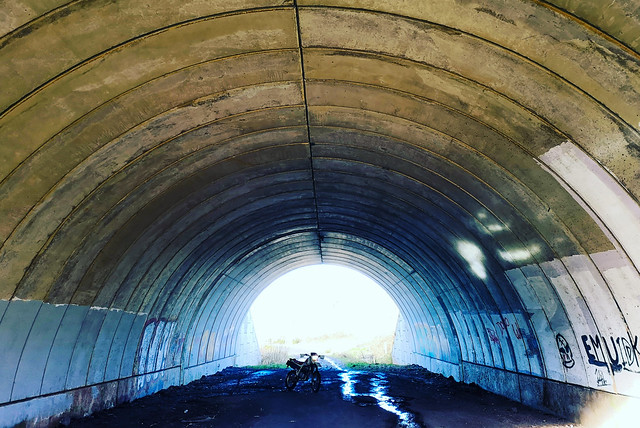 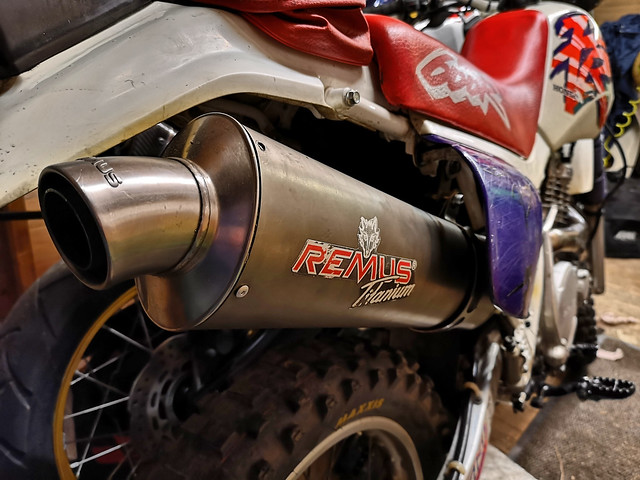 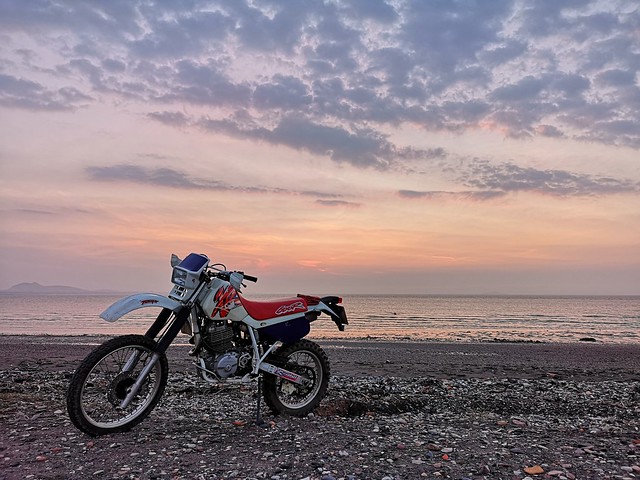 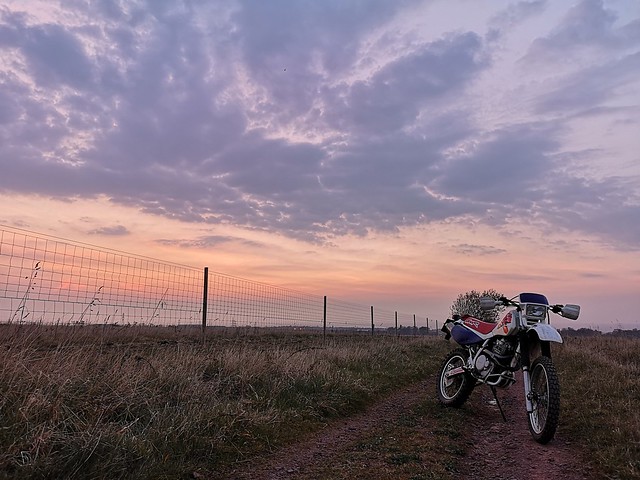 So now the XR sounds like a big thumper should and it seems to pull even stronger. I took it over to show my uncle Greaser who was servicing his beemer. The XR was much louder tha with the stock pipe, but not antisocially so. I'm pretty happy with it. 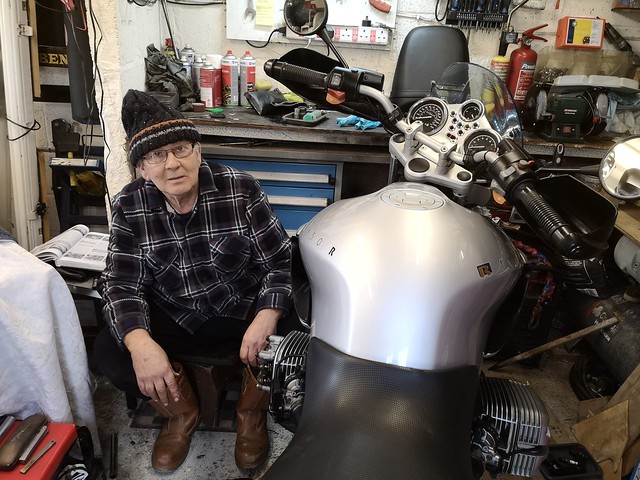 Greaser liked it too, but he is more concerned with getting his valve clearances bang on.
To summarise my earlier rant; ride your bike where you want, when you want. That's great fun.
Ride your adventure bike on whatever surfaces you like, that's also great fun.
Don't go telling people that are asking for advice, especially new riders, that something like an Africa Twin is a great dirt bike. That's bad advice.
More soon. 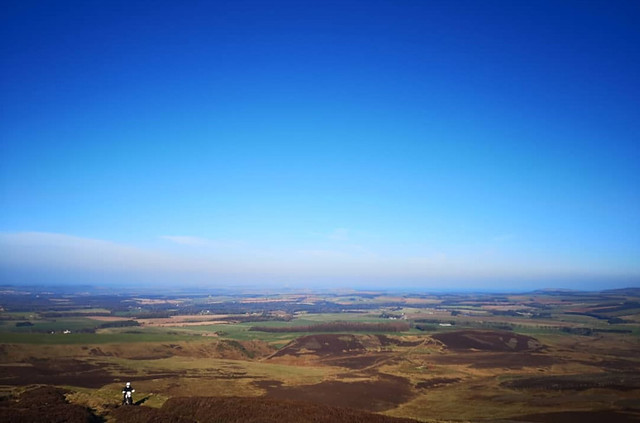