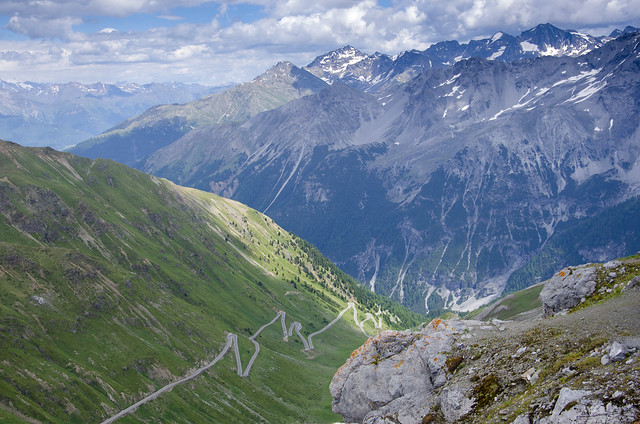 I had always promised Egor that I’d help him plan a European tour if he ever got the chance. I’ve done a fair bit of touring in France, Italy and Germany and I figured I could come up with a decent enough route if he could free up the time. Egor had a couple of weeks off and could spare some of his time for a bike trip. Usually I’d be away for two to three weeks but this was going to be a bit shorter. After some haggling we had eleven days of his two weeks off to play with. All he had to do was decide which direction we’d head in. I came up with a few rough suggestions but Lake Como was one place he really wanted to see, as was Stelvio Pass, even after everyone had told him it was a bit over hyped.
We booked our ferries. We’d be heading over in July which was a bit of a pain in the arse as that’s high season here and the start of the high season over there. The ferry was pretty expensive and it meant that campsites were going to busy and there was a high chance of it being really hot.
We started to get more prepared as time moved on. Kit was bought, maps were read and more plans were formed. Gerrit decided to join in on the trip and was bombarded with information and route options as a result. I was keeping an eye on the weather too. A couple of weeks before we were due to leave the whole of Western Europe was caught in a heatwave. 45 degrees were being recorded in some areas!


I had been in the area a few times over the past few years so I had a rough idea of a route taking in the Swiss Alps, Como, the Black Forest and the Stelvio area while still allowing for a couple of nights saying in the same place. Having a couple of nights here and there would mean less packing and re pitching tents and would also allow for a day off the bike. The trade off would mean a long first day. This was going to be both Egor and Gerrit’s first European tour and I was aware that the first fay being a biggie wouldn’t be an ideal introduction for them. I made sure we all knew where we were going and had a way to navigate. It’s pretty easy to get separated when travelling in a group on bikes and the last thing I wanted was for one of us to get lost and end up miles off course. I gave them my basic technique for tackling long distance stuff; ride at the speed limit, don’t stop unless you really, really have to. I jokingly said that you have a big drink of water at the start of the day. If you need to stop for a piss you’ve drank too much. If you need to stop for a drink then you’ve not drank enough. I wasn’t really joking though. 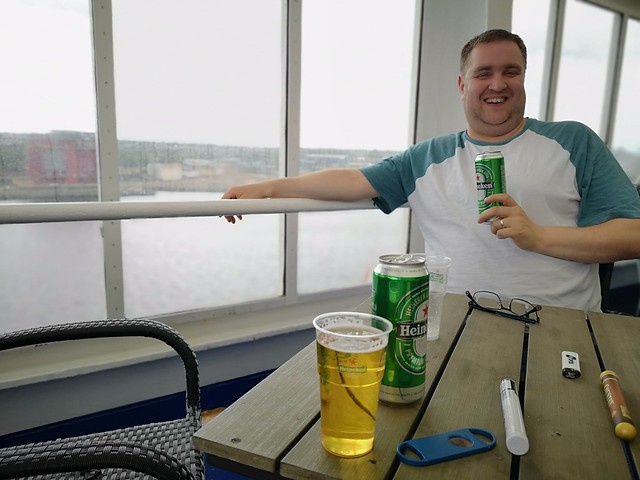 Egor on the ferry.

We took the ferry from Newcastle to Ijmuiden, just outside Amsterdam. After a quick visit to the shops and a fuel up we were on the road. We all made it out of Ijmuiden together easily enough and I got myself comfortable, sticking to the maximum speed limits so I could make progress over the coming 400 miles or so without worrying about all the speed cameras and stuff. I could see Egor and Gerrit in my mirror a wee bit behind me. After an hour or so I slowed up a bit to let them pass and make sure they were ok. As a GS and a maxi scooter passed me I realised the headlights I had seen in my mirror were not those of Egor and Gerrit. Once separated there's not much point in trying to catch up with folk again, their navigation may have taken them a slightly different route from mine. I sent a message out over our group chat and carried on to the campsite at Anould where I'd stayed the year before. 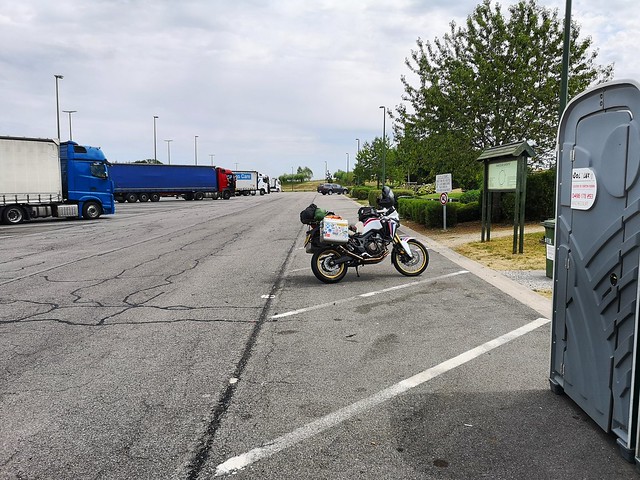 The journey had taken me around 7 hours, it had been warm but not as bad as I'd thought. I'd received a few messages from Egor and Gerrit who were making good progress. Everything in Anould appeared to be closed so I stocked up at the supermarket, getting enough food for all of us and a few beers each. An hour or so after I'd arrived Egor and Gerrit showed up. It had been a bit of a baptism of fire for them but once everyone was cooled off and fed we were all feeling much better. 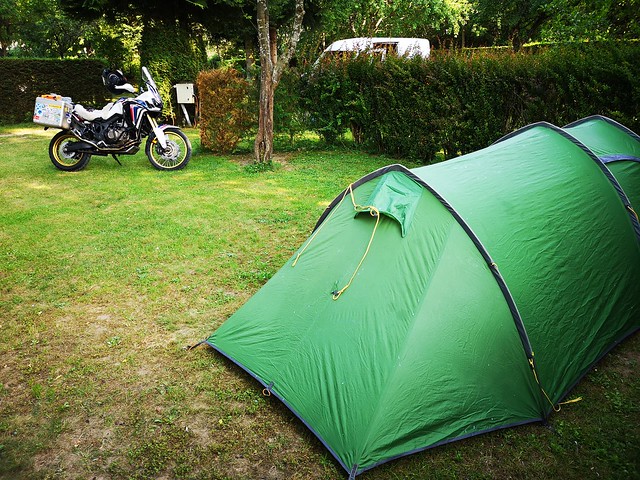 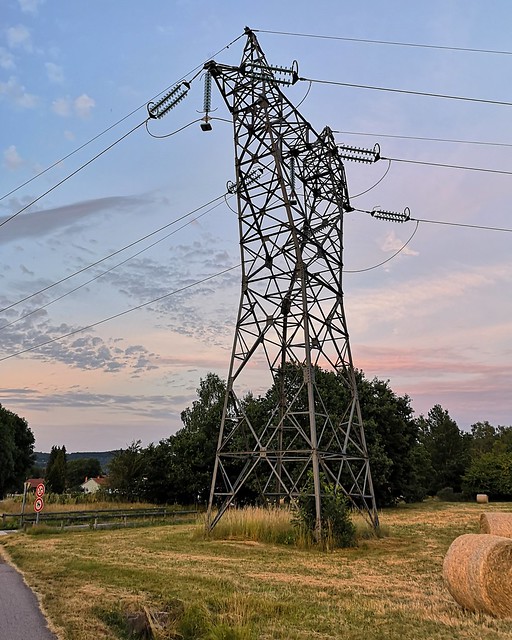 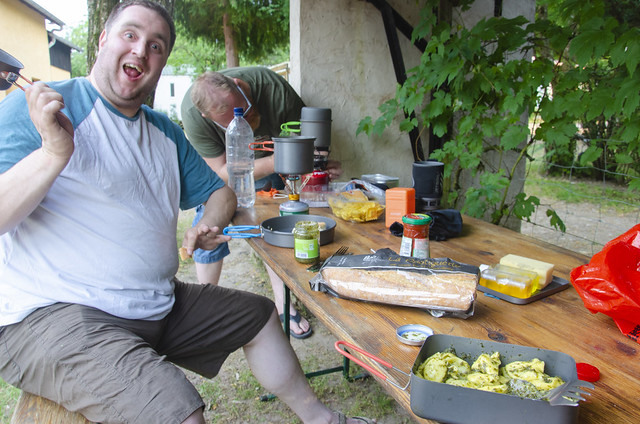 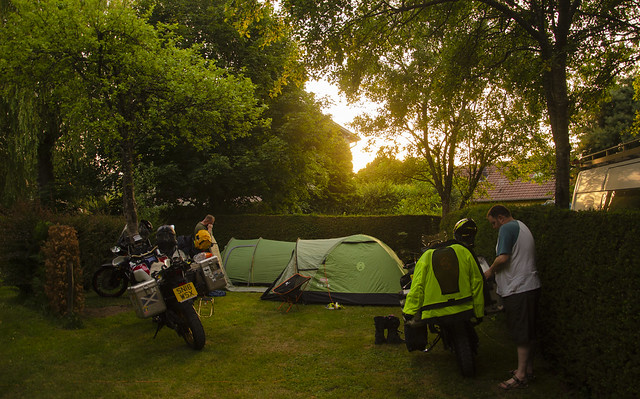 The good roads started pretty much straight away the following day with a run up some of the Route Des Cretes to the Col du Grand Ballon. It's a popular run with local French and German bikers but many tourists seem to skip past the area. If you're taking a trip to the Alps its definitely worth a day or two riding in the Vosges at least. Gerrit and I managed to lose Egor somehow. I'm sure I'd seen him ride past the top of the Ballon where we'd stopped for a snack. Once down off the hill we got him on the phone. He'd stopped in a nice wee village so we arranged to meet at the Swiss border. 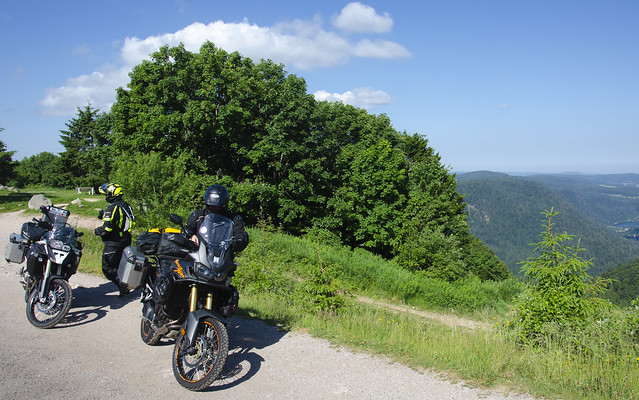 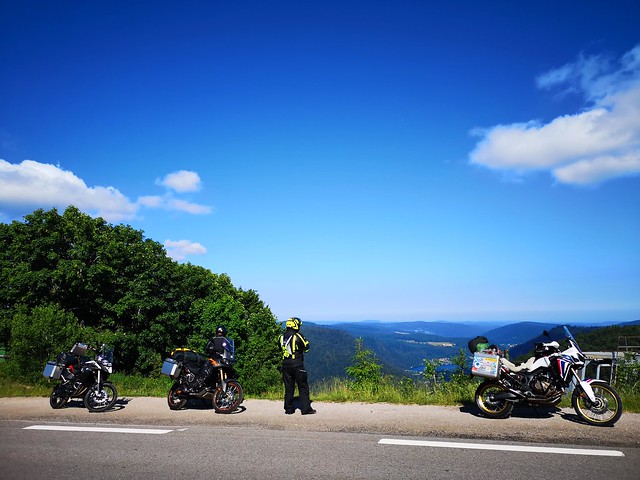 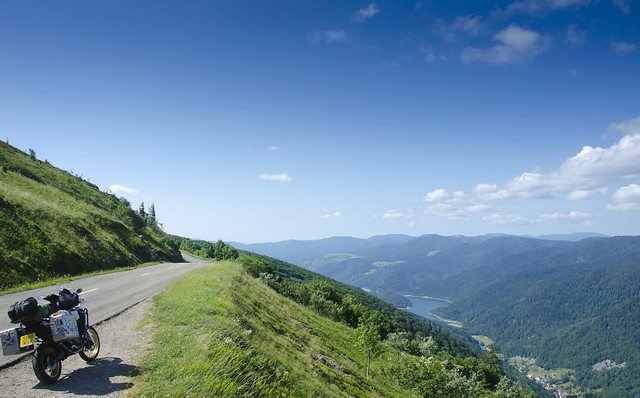 We all bought our Swiss vignettes at the border before heading and hour or so down the motorway to Lauterbrunnen. Out of all the places we were planning on visiting I think Lauterbrunnen was what I was thinking would impress the guys the most. The scenery is the visual equivalent of a chainsaw up the arse. It's on par with Norway. Even the motorways in Switzerland have absolutely stunning scenery. The fines for speeding are horrific but when the place looks this good you don't need to go fast. 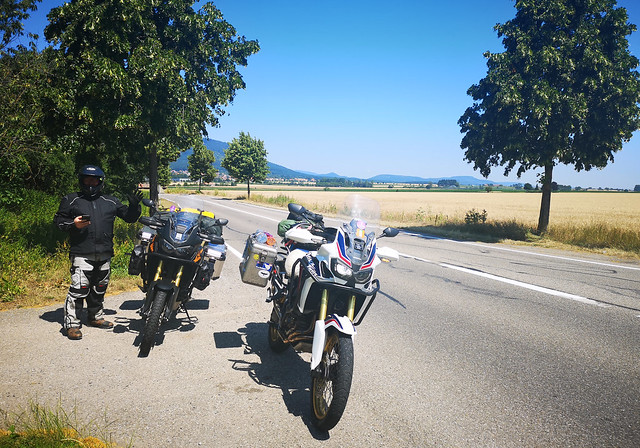 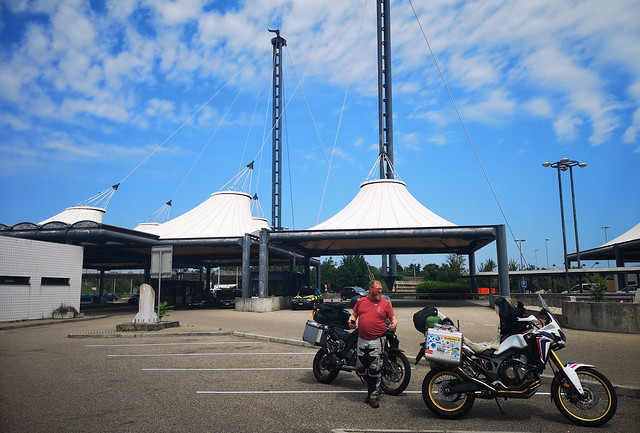 I was a bit concerned when we arrived at the campsite. There was a big queue at reception with folk getting turned away as it was so busy. Luckily those folk were all in campervans. They had plenty room for three bikes and their wee tents. Switzerland is usually fucking extortionate to eat or drink it but luckily in Lauterbrunnen there is the Horner Pub which serves food and beer at a decent price. We chilled out with a beer and some music in the sun on the campsite before heading along to the pub. While we were at the boozer the rain came on, a proper torrential alpine lightning storm. It was great to watch from under the canopy outside the pub. Well, it was for Gerrit and I. Egor suddenly remembered that he'd left his boots outside his tent! Oh well, they'll be wet now, may as well get another beer. 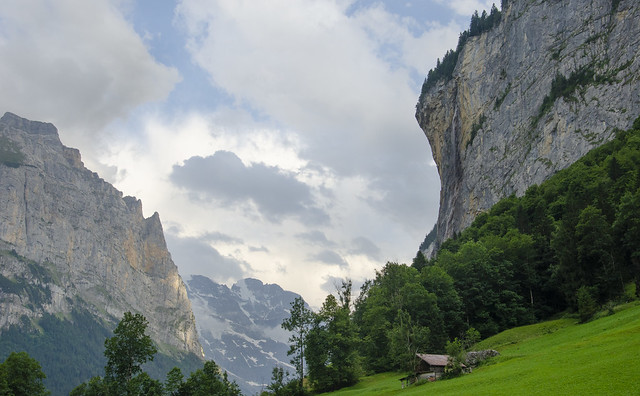 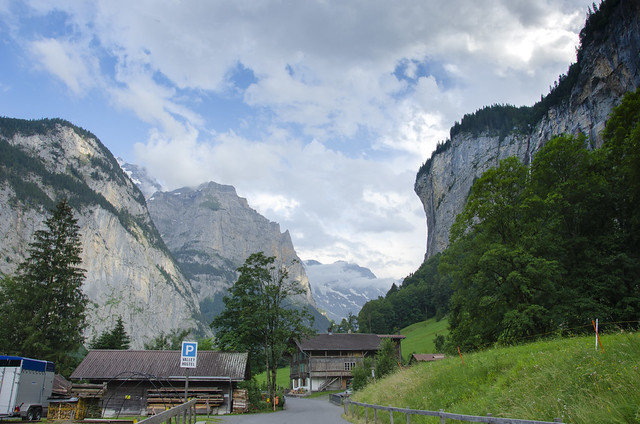 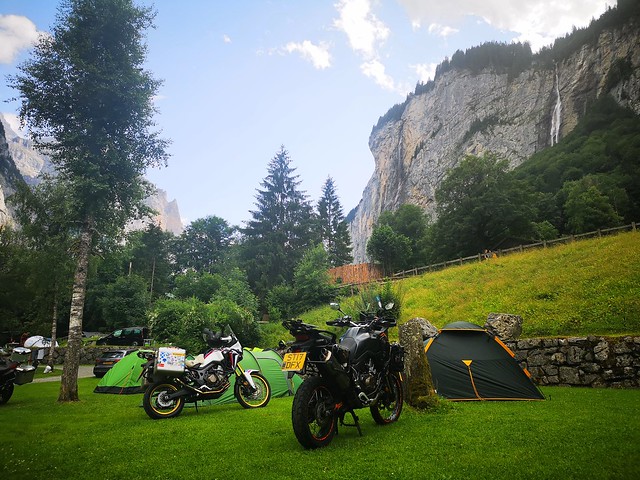 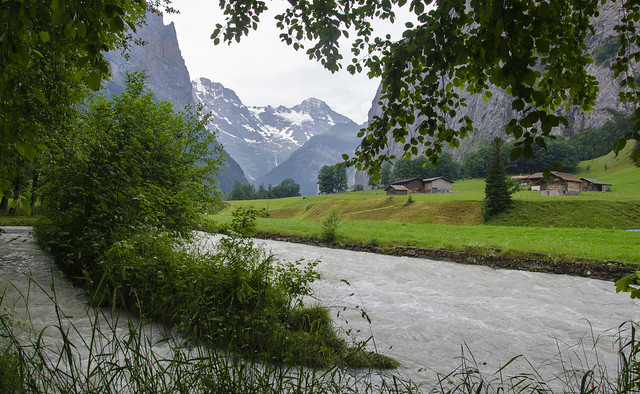 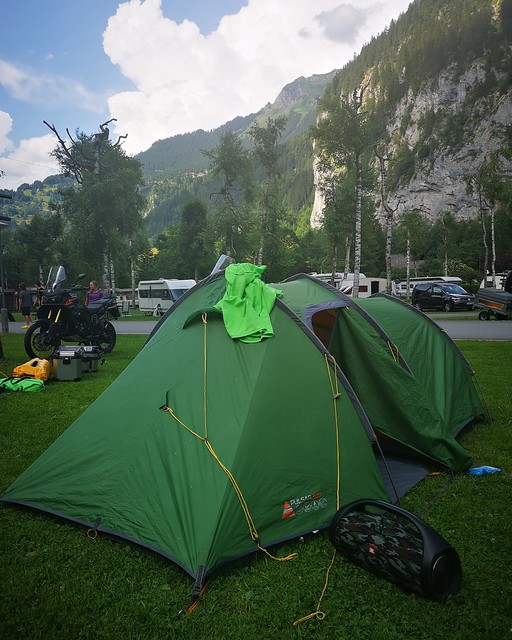 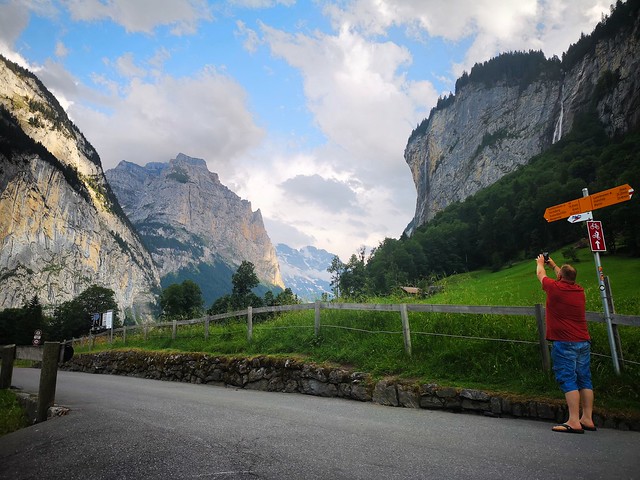 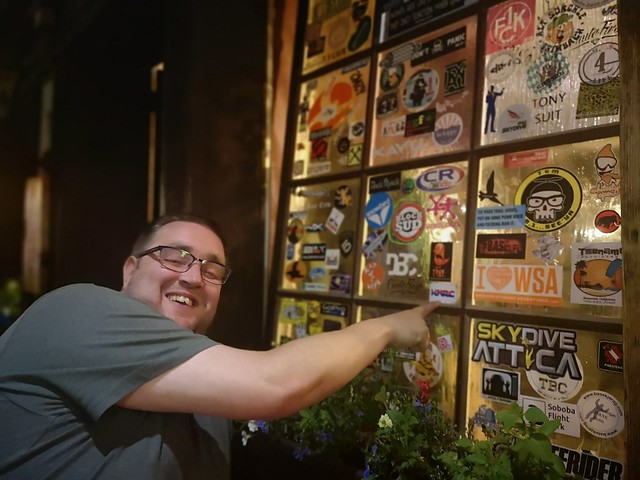