The Glen Cafe on the banks of St Mary's Loch is a favourite destination for the Winton Massif and loads of other bikers around the central belt of Scotland and even the north of England. It's scenic views, decent cheap food and the great roads that take you there are all magnets for bikers. A few Saturdays ago the magnets were on the Massif.
Aidan, Andy, Ben, Hammy and Smillie all met at my hoose. Tea was made by HB and drunk by us as we waited for Aidan to fit his new tax disk. 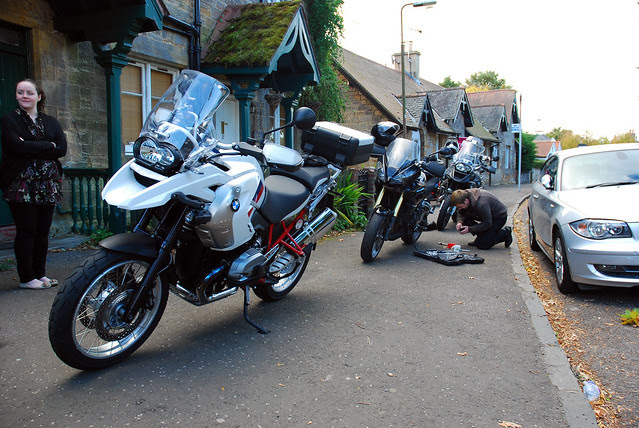 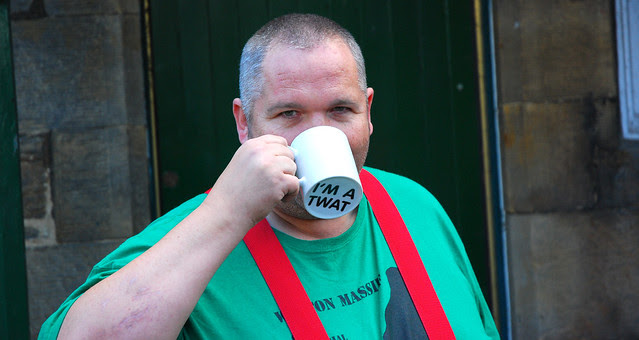 We made sure Smillie got the special cup... 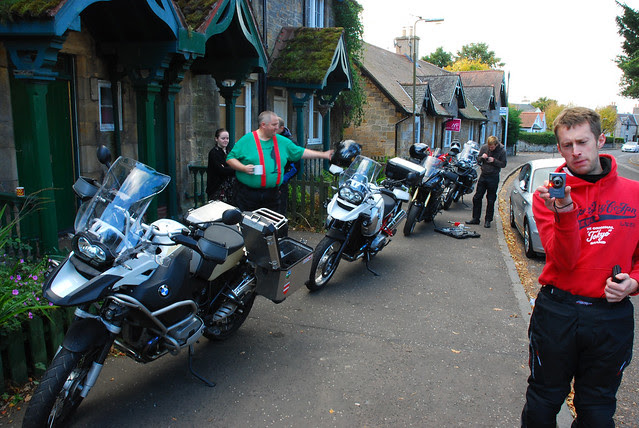 This is a great run and only takes a few hours including stops. Starting in Pencaitland, lets say at the Winton Arms, where you can get teas and coffees and a nice pie, head to the A68, then cut over to Gorebridge via the B6372 past Vogrie Country Park. Follow on the B6372  past Temple then turn of on to a wee single track road that takes you through the wee steading of Westloch and pops out on the A703, which you follow into Peebles.
From Peebles head along the A72 before turning off onto B712 signposted for Broughton. At the junction of the B712/A701 take a left, heading south. Enjoy the fast twists and turns untill you get to Tweedsmuir. At Tweedsmuir take a left past the Talla then the Meggat Reservoirs. This is a great fast singletrack road with some stunning views. Eventually you'll come out on the A708 which runs along the banks of St Mary's Loch. To get to the Glen Cafe take a right and the Cafe is a couple of miles along the road. 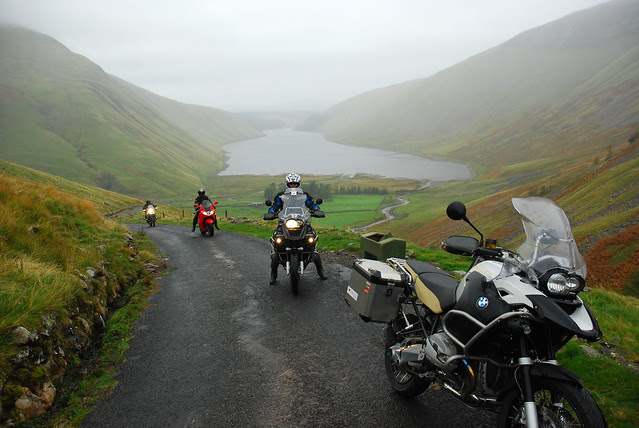 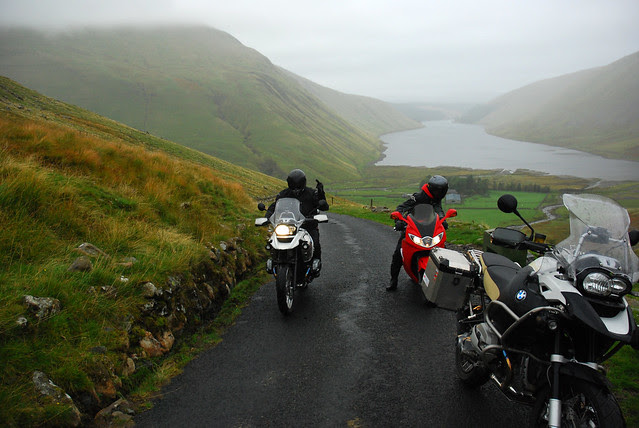 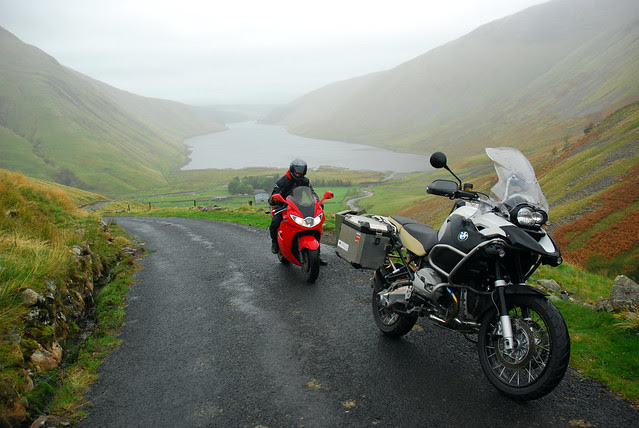 Looking back towards the Talla. 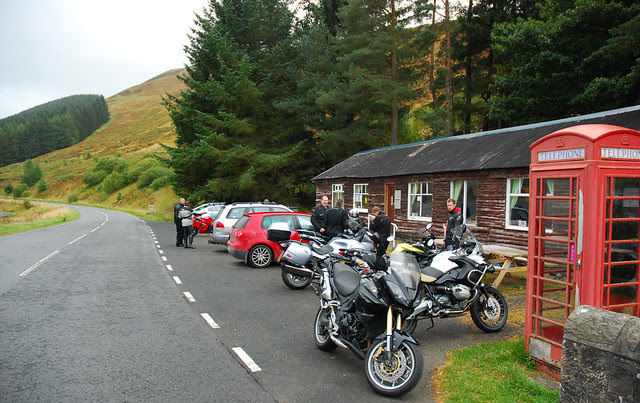 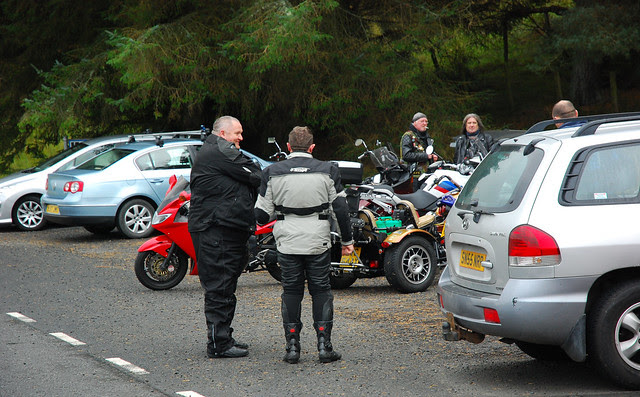 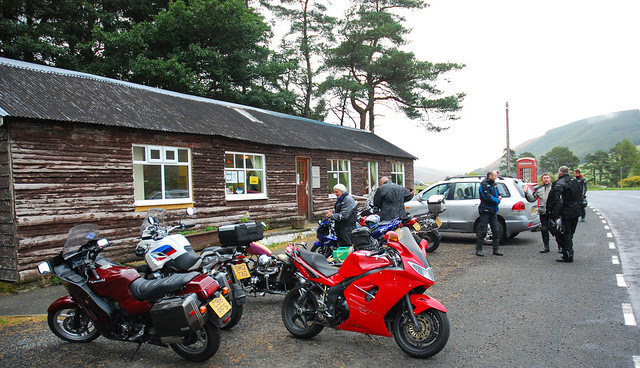 Outside the Glen Cafe 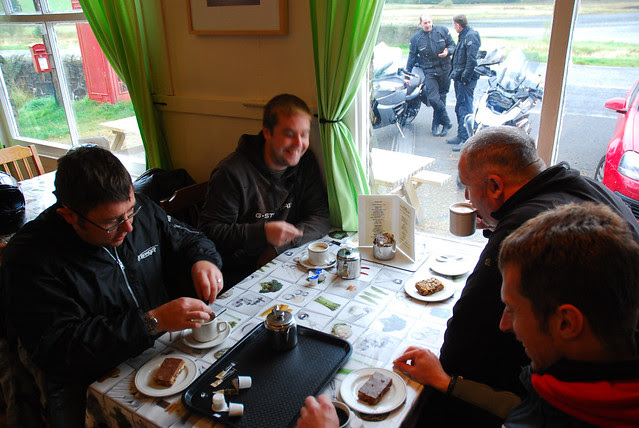 After refueling at the Glen Cafe we headed back along St Mary's Loch the way we'd came. At the crossroads at the Gordon Arms Smillie headed left and we headed right. Smillie headed to Innerleithen then followed the B709 then the B7007, known as the Granites road back to the A7, just south of Gorebridge. It's the same route as the map at the top of the page.
The rest of us took a right at the Gordon Arms. The plan was to visit the Buddhist Monastery near Eskdalemuir. I was leading the way and inevitably I lost my bearings. Hammy was right behind me and Andy a few minutes behind him so we studied Hammy's map and I pissed around with my old GPS trying to figure the way to go. An old couple were driving past and I flagged them down to see if they could point us in the right direction, they were tourists so couldn't help. Then they dropped the bombshell..

"There's a guy fallen off a black bike a few miles back and a guy on a red bike helping him."

We all headed back as quick as we could. Rounding a corner I seen Aidan and Ben standing (thank fuck) looking at Aidan's bike, which was lying down the wee hill just off the road.
Aidan had lost the rear after locking it up on the greasy road. the damage to his bike was pretty minor and he was OK apart from a sore leg. 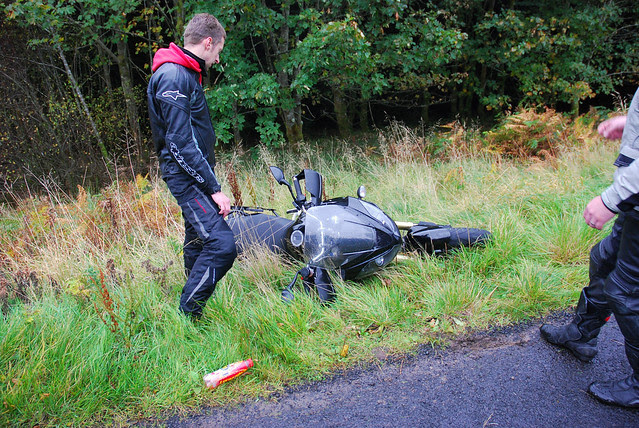 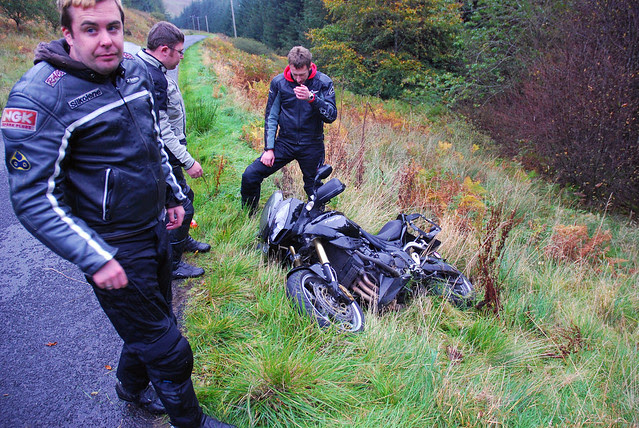 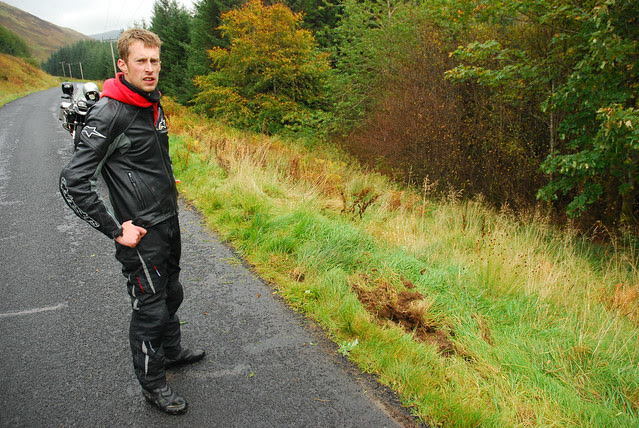 We got Aidan's bike up on the road and straightened bit out as best as we could. Aidan rode the bike back to the Gordon Arms but his leg was hurting like fuck, so we devised a plan. Hammy, Aidan and Myself waited at the Gordon Arms while Ben and Andy rode back up the road. Ben came back in his car with Andy, Andy rode Aidan's bike back with me and Hammy and Ben drove Aidan home.

Aidan's bike has been mostly fixed by Faithir now. His leg is better too.
Posted by Mike at 11:11 PM