The Possible Birth of a Winter Motorcycle Rally. 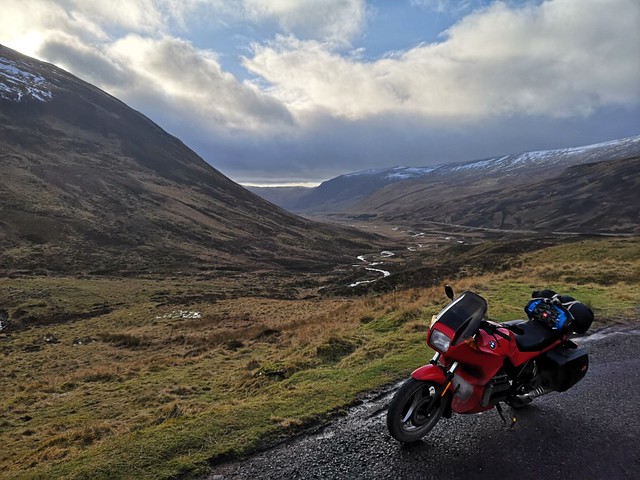 Last year we had the Frosty Pubes Rally at Tim's in Strontian. The only thing was it wasn't very frosty with the weather giving us a relatively warm 9 degrees and loads of rain. This year we wanted to do it again but we needed somewhere a bit colder, plus we're at Tim's all the time so it's nice to go somewhere else. I had somewhere in mind.

"I know where we can go. The Cairngorms!"

I've stayed at Glenlivet Hall a few times in the past and figured it would be ideal for our needs. It's pretty central in Scotland meaning everyone involved would have to travel about the same distance. After some Facebook based organising we had a plan and some willing attendees. All in we had around 30 folk invited.

A few folk had pulled out by the time it came to leave. Old Mike had to help his daughter move, poor Andrea had came down with the flu and Aidan went to watch the football (I know, what the fuck's that all about?) I felt sorry for Andrea. He'd been looking forwards to a winter run for ages, buying himself a winter a bike for the trip and everything.

My run up was nice. The sun was out and it was freezing cold. I had loads of layers on and Mikey Sunter's heated grips so I was nice and warm. This was the first outing of my new Forma Adventure boots. They were great too, keeping my feet warmish and dry all weekend. I headed up the Blairgowrie, Glenshee, Lecht, Tomintour route. This is known as "The Snow Road" as it goes over two of Scotland's highest roads and past two ski centres. Unfortunately for them there wasn't much snow and a fair bit of ice which I don't think makes for the best ski conditions, it look good though. I stopped off at Glenshee cafe for some lunch, getting a few funny looks and laughs from the other folk there. 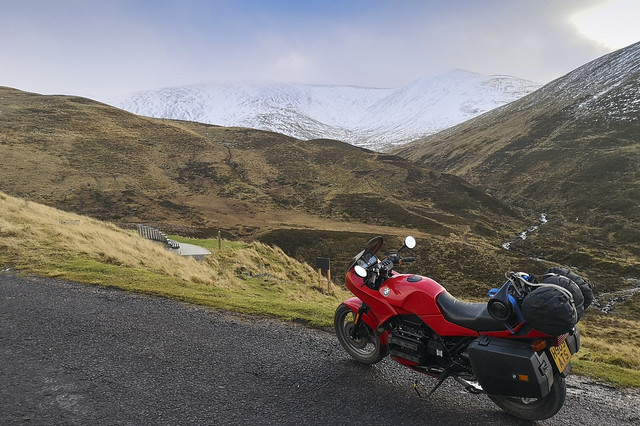 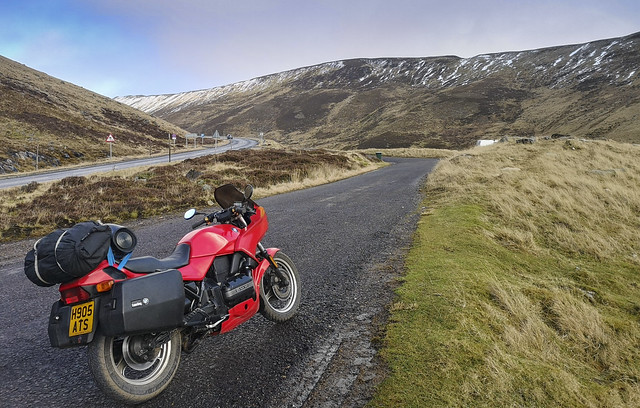 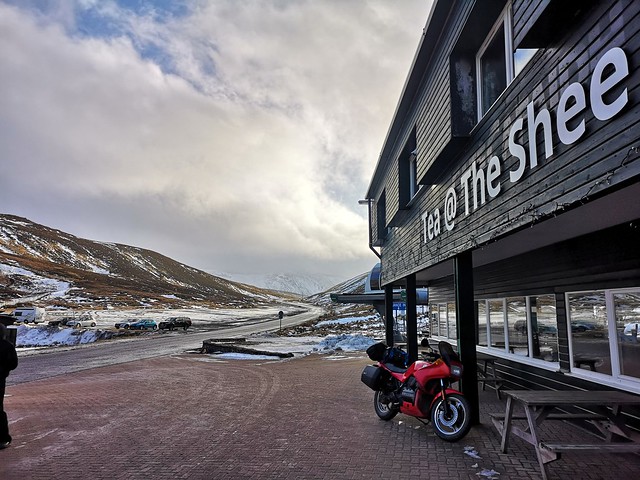 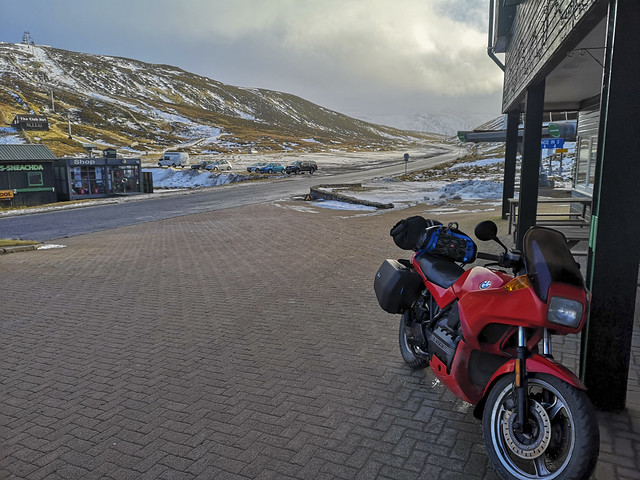 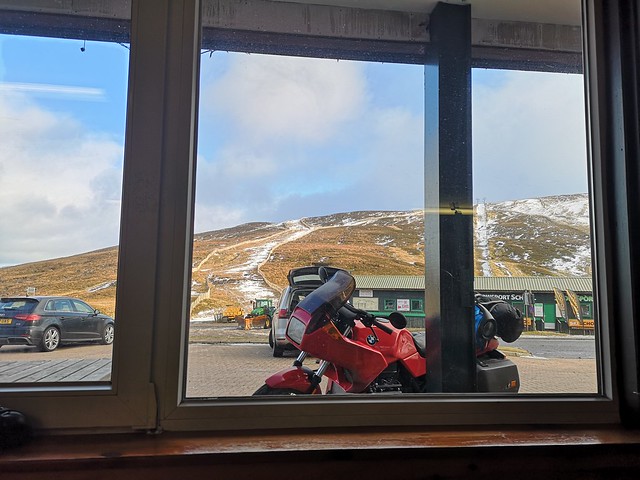 When you're riding in the snow or where there could be ice I've found the most important thing to do is be as smooth and as relaxed at you can. Be extra careful on parts of the road that are in the shade as there's a much higher chance of ice being there, plus you get lots of shite falling off trees which makes the road slippy. I tried my best to stick to this way of riding while heading off down towards Braemar. There was quite a bit of ice at the top as I said, but it all calmed down a bit as I dropped in altitude. 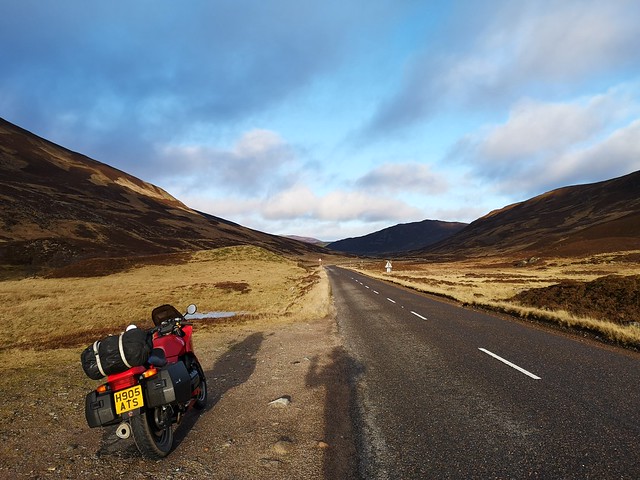 The Lecht was the same story but with a bit less snow. Mike Sunter was playing up a wee bit going up the steep part off the road. It felt like it was being starved of fuel when holding sustained higher revs and the fuel pump was making a bit more noise than usual. Hopefully it lasts the whole trip! Fuck being stuck at the side of the road waiting to be recovered when it's only 2 degrees! 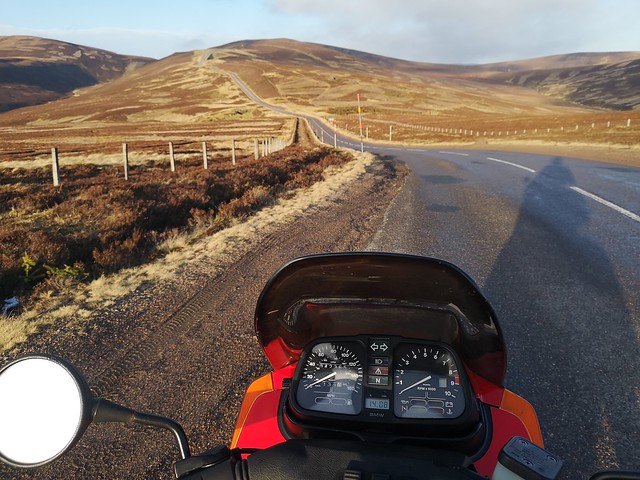 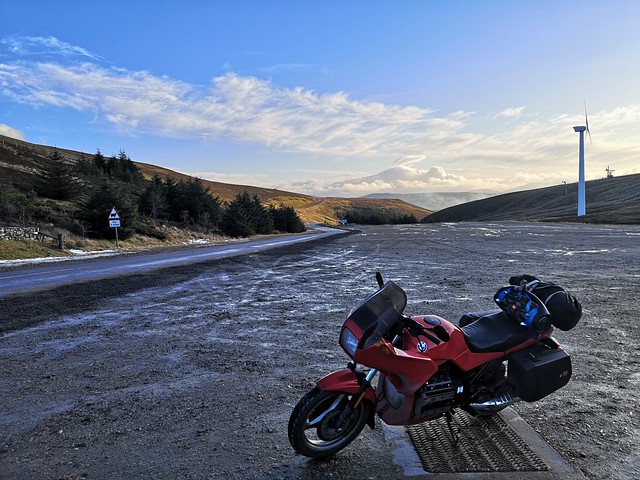 After a few navigational errors I found my way to Ruud's house. Ruud helps run the hall and came down with me to remind me how everything worked. While I was there I got a call from Mikey Sunter (the man, not the bike) who was riding down with Snake from Caithness. They had met up with Tim from Strontian on the road but Mikey had got a puncture on his C90, so they'd stopped to fix it. There no pub or anything near the hall so I headed to the shop to pick up beer for us all. While I was there the rest if them rolled up, puncture fixed. We had a grand total of 4! 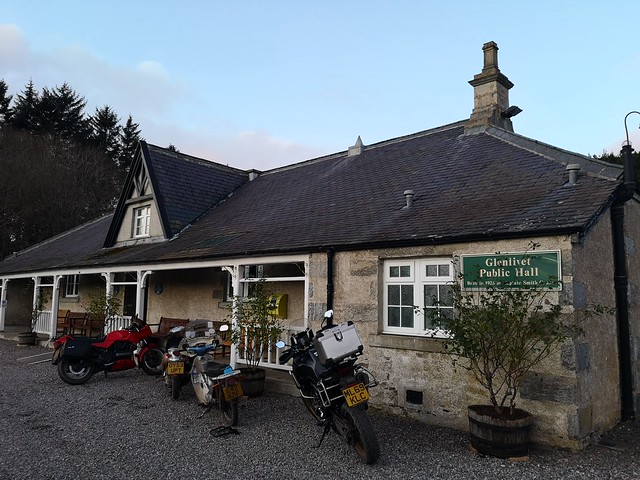 There's no other way to put it. The hall was fucking freezing! We jumped around like lunatics playing tennis with a wee bouncy ball using bars of chocolate and books as rackets but it was still chilly. However there was the kitchen and the bar area which were much smaller and easier to heat. Ruud even suggested sleeping in there as opposed to the hall as it would be warmer. He even though a tent outside would be warmer! 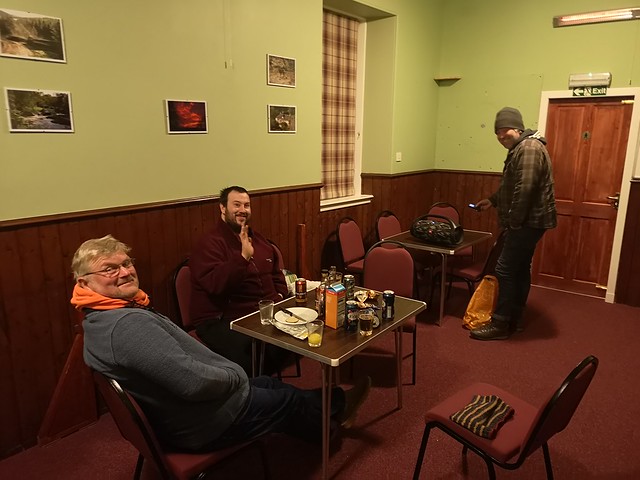 I was actually OK when in bed. We had all dunted ourselves with beer, whisky and poitin. I had my Exped mat, my sleeping bag, a blanket I'd brought and three base layers, but when I got up for a piss it was FREEZING. You could see your breath and everything. When I woke up in the morning Mikey Sunter (man, not bike) was gone! He'd dragged himself through to the bar as he found the fridge like quality of the hall a tad too cold.

Hot drinks and some food warmed us up as we planned our "ride out". We came up with the following.
Option 1 didn't even get a look in. We waited another hour or so to allow the sun to get up a bit before we set off. Snake led on Pedro, his adventure scoot, followed by Mikey, me then Tim. He was fair hauling ass too. I was pretty concerned by everything around us being covered in ice but Snake ploughed on to Dufftown. He must have really been looking forwards to the cafe because after a quick stop in the shop for supplies it was straight to the cafe leaving his lid in a flower bed beside Pedro! 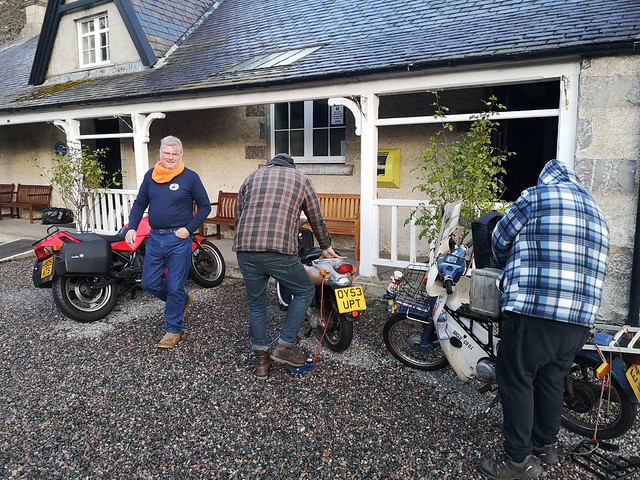 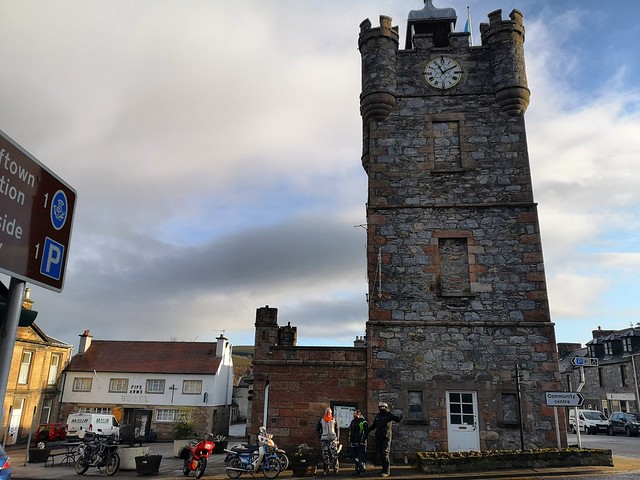 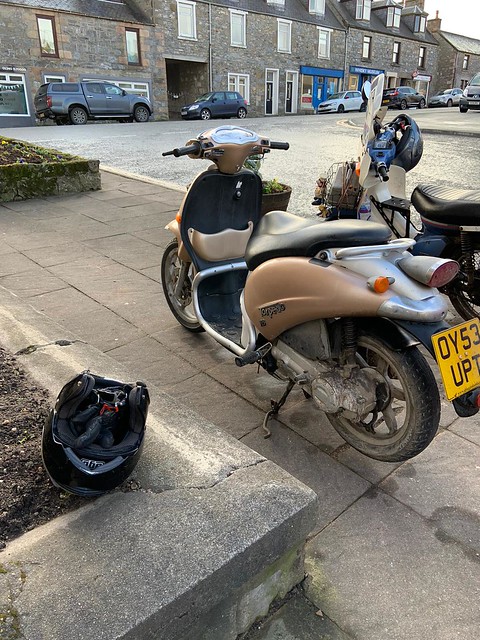 Second breakfast was had in the cafe where I entertained the group by showing them how much brown sauce makes me sweat. We found Snake's lid, got the puncture repair kit and set off just as it began to rain. This isn't as bad as you'd think as it meant that the temperature had risen a bit so there would be less chance of ice. The rain became snowy sleet as we headed back up the hills giving a Star Wars feel to ride back to Glenlivet. 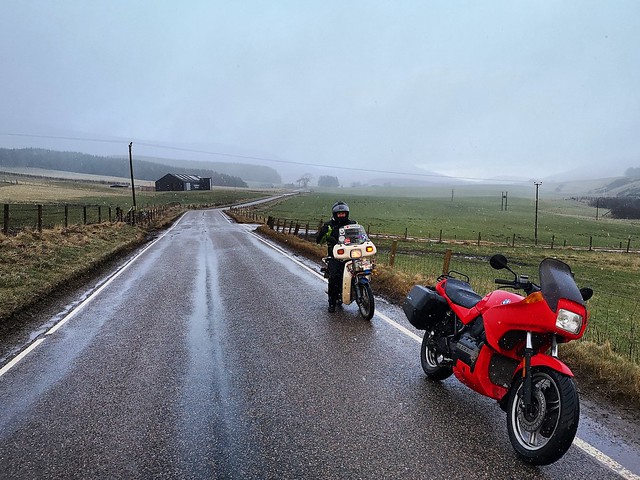 Back at the hall it wasn't long before Gerrit arrived. We were 5! The sun came out so we had a wee wander down to the old packhorse bridge where I got a few nice photos. The bar at the hall is open on a Saturday from 3 till 7 which we took advantage of, having few beers after discussing the merits of various bikes. Then Colin showed up! We were 6!! Colin was on a flying visit so were were back to 5 in no time. We were speaking to Derek, one of the local folk who had came for a beer. His bike was at his house just along the road so technically he was at the rally. We were 6 again! 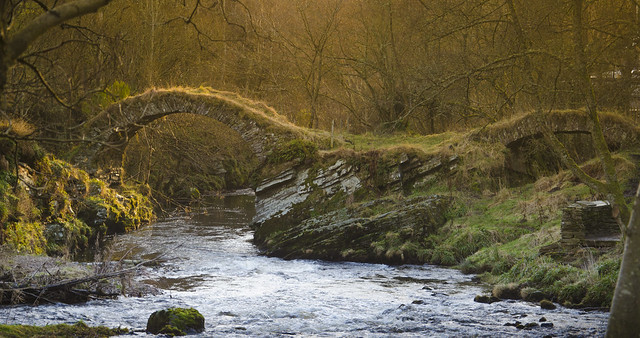 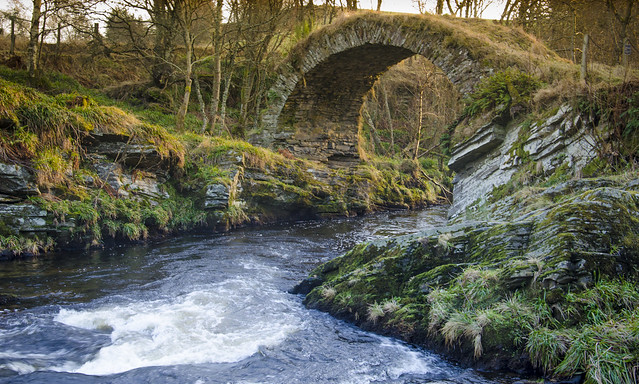 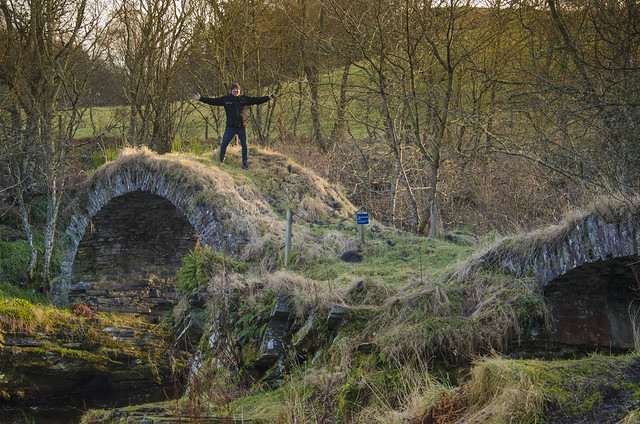 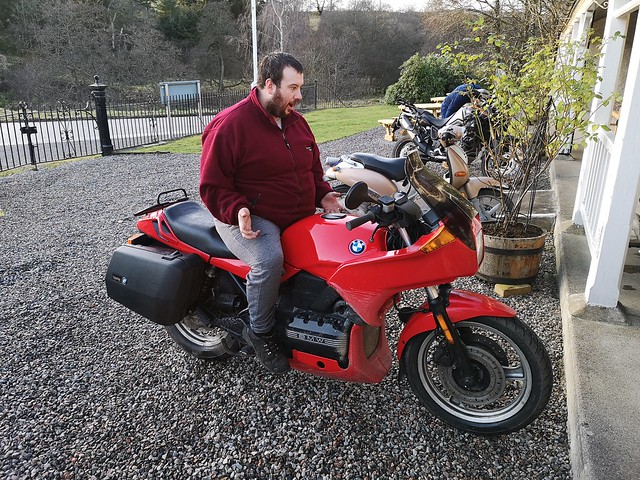 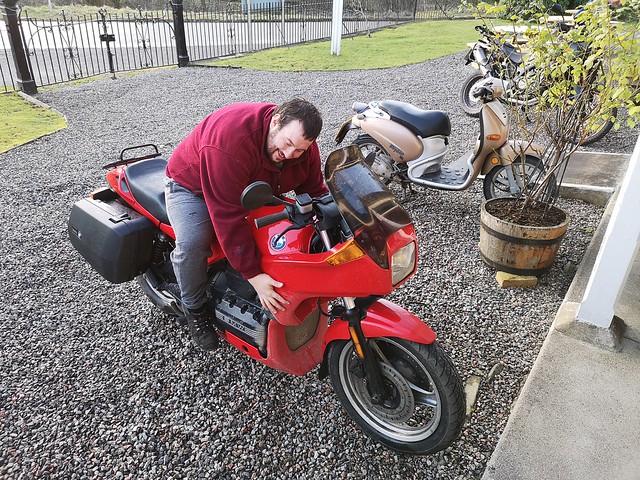 Mikey Sunter on Mikey Sunter. I'm yet to convice anyone else to join the "K Krew". 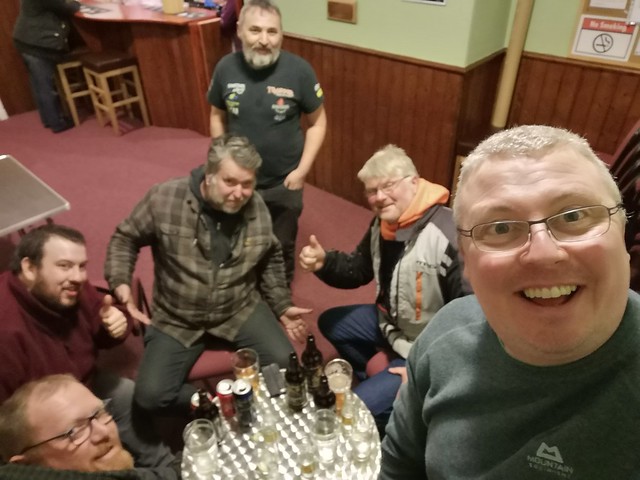 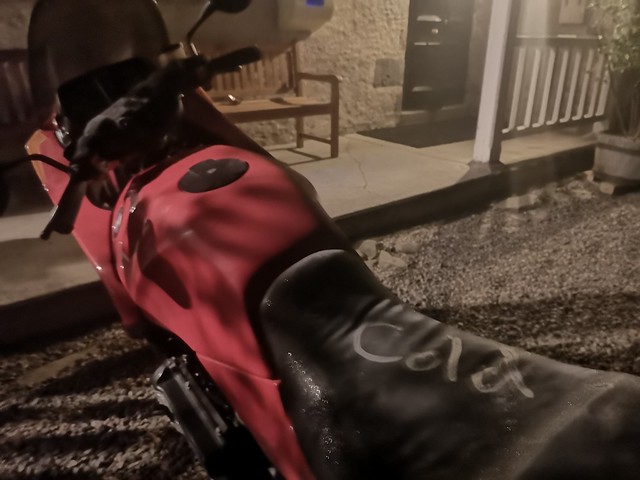 Once we'd eaten as much of our remaining food as possible the following morning we set off. Gerrit and I opted to ride down the A9. Usually I would avoid it like the plague but it was the fastest way home. Over Drumochter had more snow than the ski centres so it even looked nicer than normal.
Everyone got home safe, nearly. Mikey Sunter's (bike) fuel pump didn't die, so I'll change the fuel filter and see how that goes. Mikey Sunter (man) got another puncture 5 miles from home but got rescued in a van. 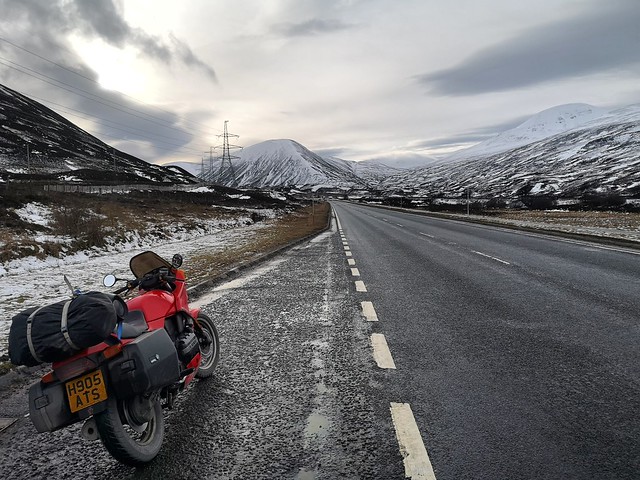 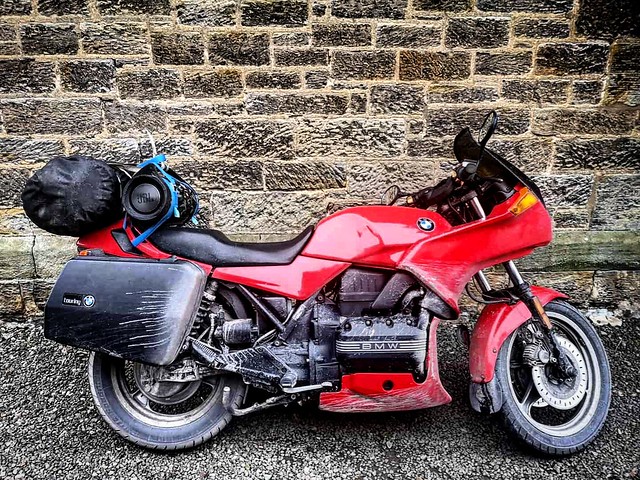 So....... We're going to do it again next year around the same time. Who wants to come along? I reckon it'll be £10 to £20 per person to cover the cost of the hall and electricity etc for two nights. I'll probably advertise it on www.PassingPlacesTours.com closer to the time. 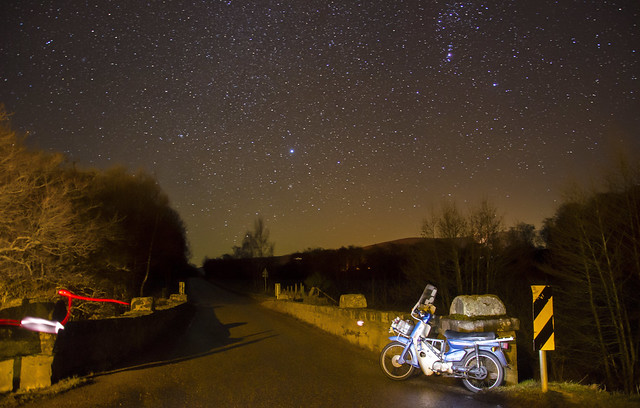