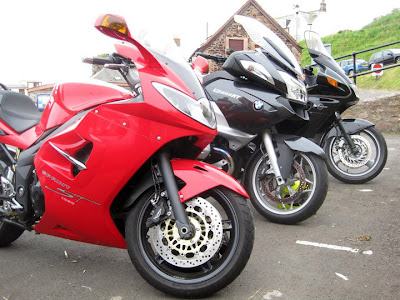 Ben, GHC, Faithir and me went on a wee spin over the hills to St Abbs, a wee harbour village just down the coast from where we live. I wanted to try the gopro on my GS and some of the other bikes. Unfortunately while half way up the hills Ben noticed one of my panniers was loose. Shite. One of the wee metal clips that are held on by a big screw wheel had came loose and fell off. Its a good job the pannier didn't fall off. A zega pannier travelling at 60 mph could really fuck someone up. We traced our way back home and dropped the panniers off. GHC reckons he can make a new clip thingy part, which is good as Touratech would probably charge me forty quid for a new one. Faithir got a different bike as he was cold on his old R80GS (old bastard), and we set off again. This time we headed down the A1 to St Abbs for a cake, a coffee and a wee look around the harbour. Well everyone else did. I was a bit later than everyone else. I lost them all when I missed them turning off for petrol, then I missed the turn off for St Abbs and ended up in fucking Eyemouth. I had no fucking clue where St Abbs was untill GHC phoned me with directions. I eventually got to St Abbs and had a coffee and a nice cake in the wee cafe. They do a full breakfast so I might return to review it. We wandered round the harbour for a bit then we went back home cross country through Duns and up the A68. 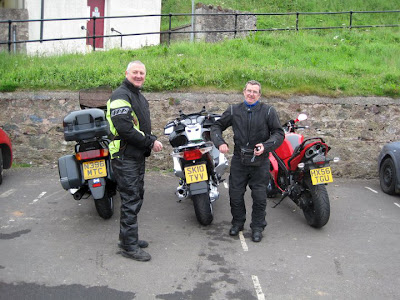 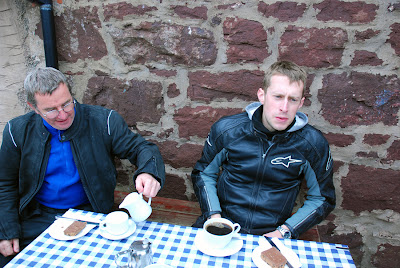 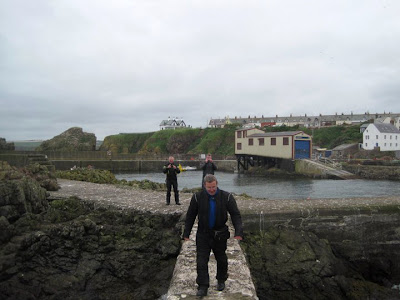 It was a good day out, I made a wee video of the run, but I ran out out of memory before we got to St Abbs. The battery also went flat but that was my fault, I forgot to turn the camera off and filmed loads of footage of me carrying my hat around. Twat! I'll buy a new memory card too. I only have a 4GB one at the moment, so I'll go for an 8 or a 16. Anyway, heres the video.

I went over to see GHC on the C90 today and gave him the remaining clip thingy so he can use it as a template to make the new one. Here's a wee video so you can see what the fuck I'm going on about.
I'm sure he'll sort it oot nae problems.
Posted by Mike at 7:06 PM