HB and Mike do France Part 2

Following on from Part 1. 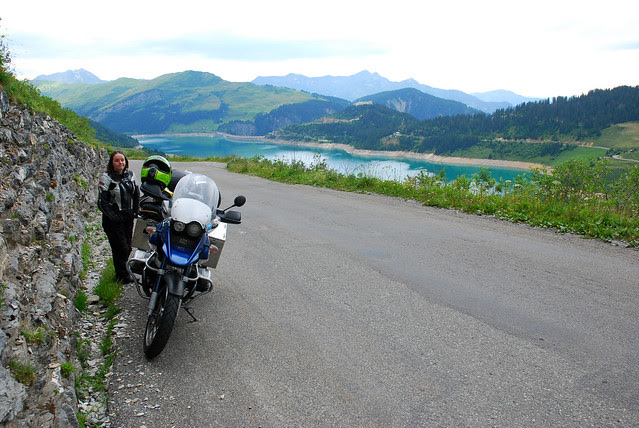 The GS was fucked. It wouldn't start and neither Hammy or myself could fix it. We said our goodbyes to Hammy and Claire. They were only with us for ten days and my breakdown was eating into their time. They carried on down the road and we called the breakdown cover people that I had sorted out before we left.
Now, remember in Part 1 I mentioned that I'd been given a sticker in Beaufort and I'd felt guilty about taking it as we hadn't even eaten in the place? Well the wee town of Beaufort would be our home for the next three days. The GS had broken down on a Sunday, the Monday was a public holiday and Tuesday was Bastille Day. The closest BMW dealer was in Chambery and wouldn't be open till Wednesday.The breakdown recovery guy dropped us off at Beaufort campsite and stashed the GS in his Brothers garage. He'd take us and the GS to Chambery on Wednesday.
I was absolutely fucking gutted. My bike that had taken me on so many amazing trips was broken. HB tried her best to cheer me up but I truly was a miserable cunt that Sunday night in France. 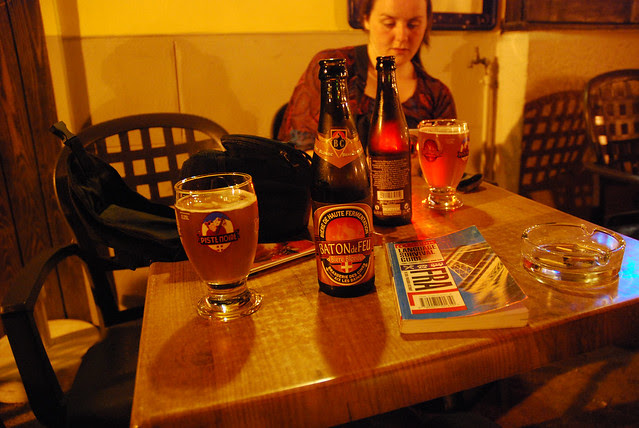 Bike fucked? get pished.
The next day we wandered into town. I was still gutted about the bike, but we figured make the best of the situation. There's worse places to be stuck, Beaufort is a beautiful wee town. Over the next few days we explored the few streets that made up the town and hid from the heat in pubs. It was fucking sweltering, with the thermometer on the town notice board reading 44 at one point. We practiced our French as nearly no one in the town spoke english, spoke to locals and other bikers out riding the Route Des Grande Alpes, visited the cheese factory, ate snails (which were lovely) and drank some nice beers and wine. 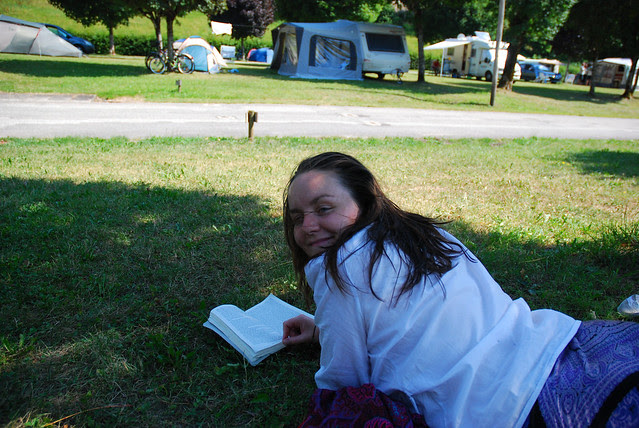 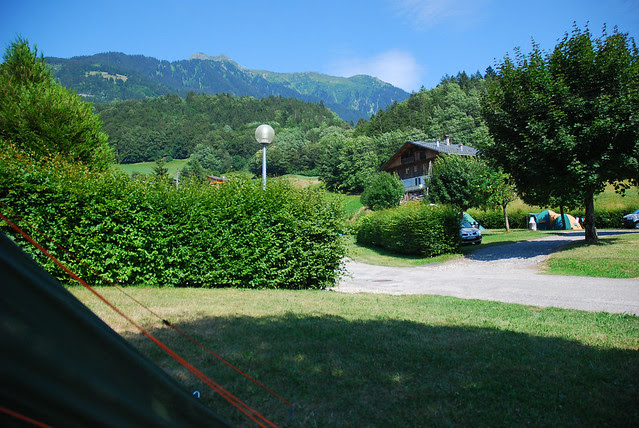 The GS at Beaufort campsite 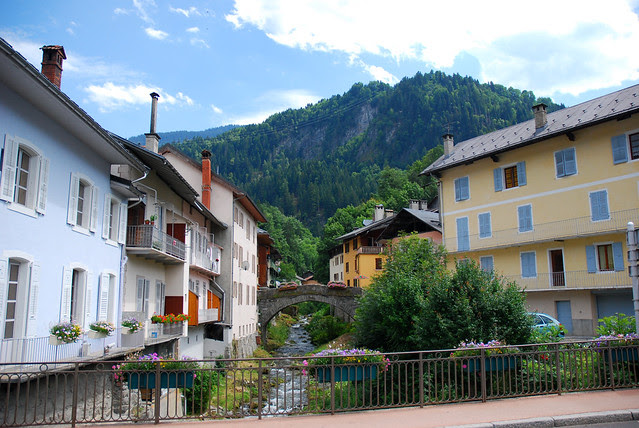 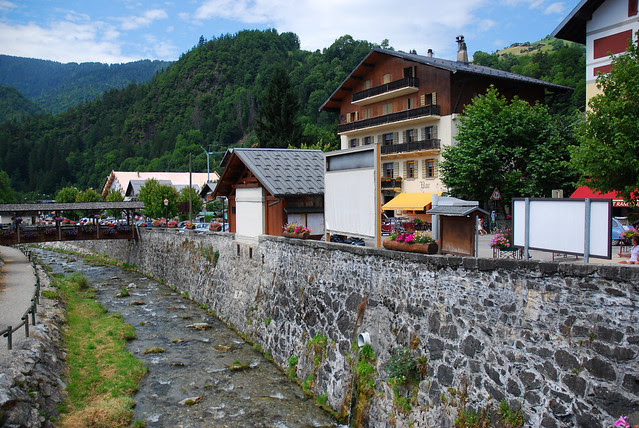 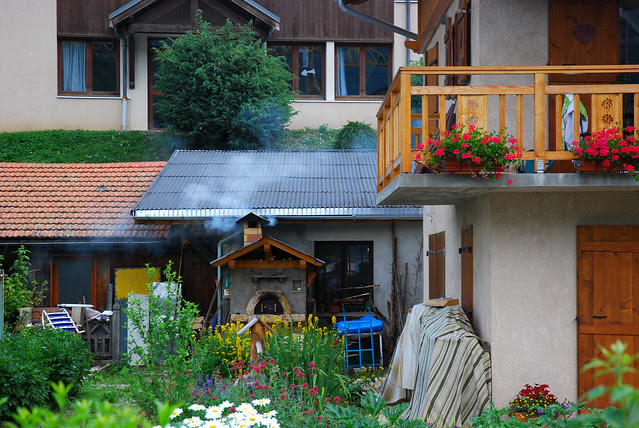 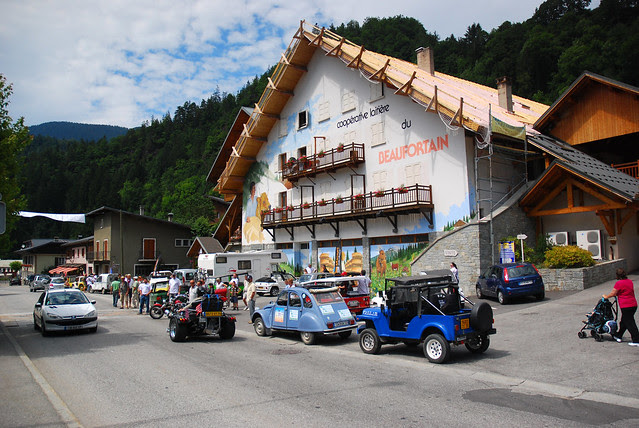 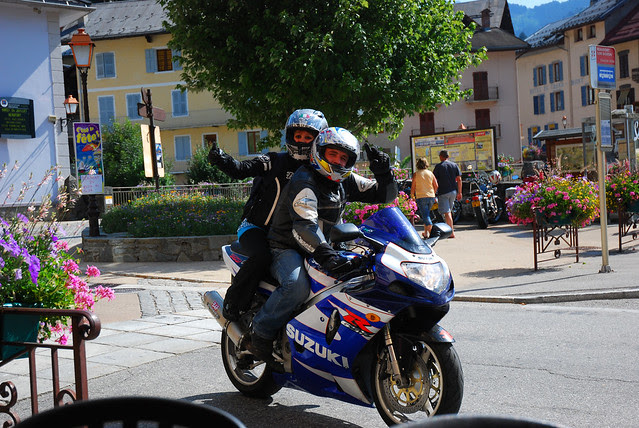 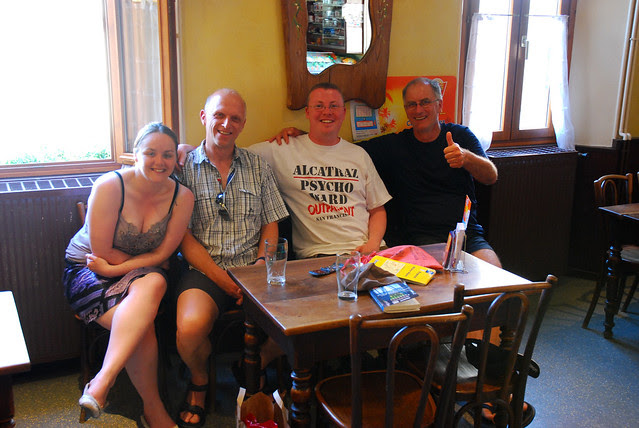 Beaufort bevvy. HB and me with two German cyclists. 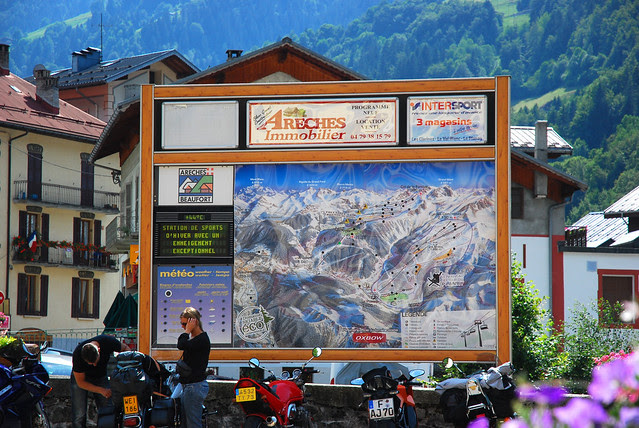 Check out the heat!! 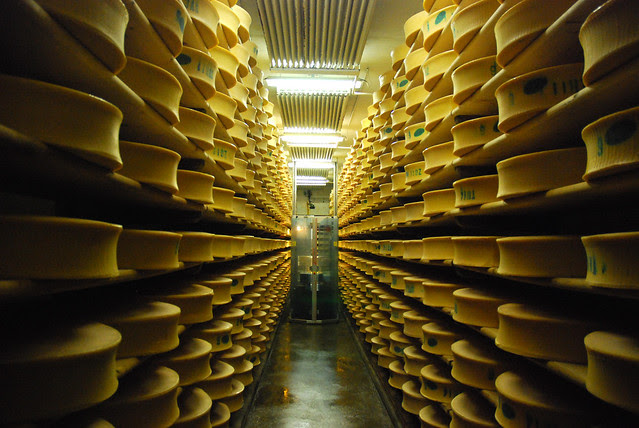 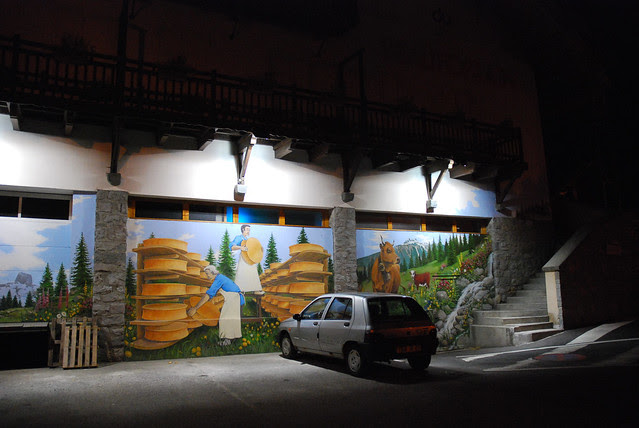 Cheese factory by night.
By the time Wednesday arrived HB and I could have got jobs on Beaufort tourist information, but Breakdown Recovery Guy arrived with the GS! It was ace to see my bike again and make sure it hadn't been dropped or anything. It took us just over an hour to get to the BMW dealers on the outskirts of Chambery. In no time at all the BMW mechanics discovered the problem, as we had suspected the fuel pump was fucked. An easy fix, but the parts won't be here till tomorrow. Shite. One of the staff spoke excellent english and gave us a lift to the closest motel. The place was a fucking shithole in the middle of a massive industrial area. We got a room then crossed the motorway pass over for some food. The best we could find was a fucking horrible grill style fast food place. I fucking hated it. I kept saying to HB that we shout just cut our losses and head home. HB responded by giving me a basic Man The Fuck Up chat. We'd been planning this trip for ages, why the fuck should we let a minor mishap fuck the whole thing up. 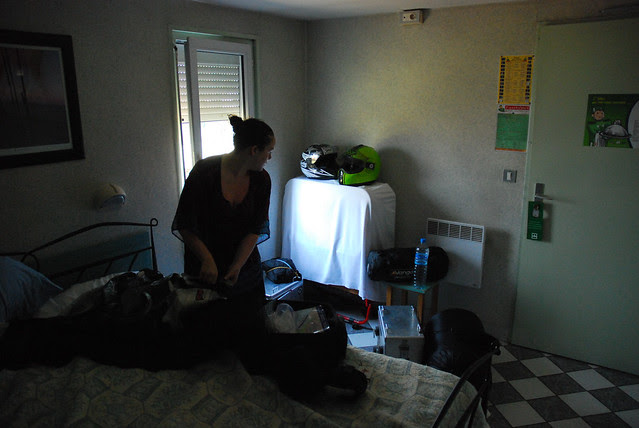 Our motel room
Around mid day the phone went, the GS was fixed and the multilingual guy was on his way to pick us up. HB put the bill, nearly €500 on her credit card and I fired the bike up.
BBRRRRRRRRRRAAAAAAAAAA
BRRRRRRRRRRRAAAAAAAAAAAAA
FUCKINCHAMPIONYAAAAAAAASYAFUCKERCHEERSMATENICEONEYEEEEEEE!
We loaded up, got fuel and fucked off.
A couple of house later we were in Val d'Isere. The air never smelled so fresh. 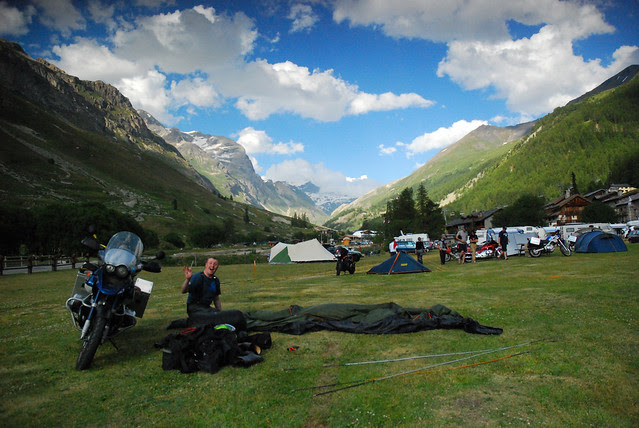 Pitching up in Val d'Isere 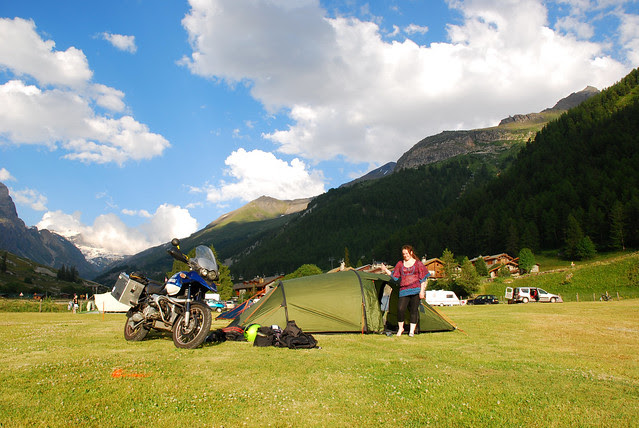 The sun even came out. It was an awesome evening. Val d'Isere campsite it at the highest, most southern part of the town so we walked back down to the town. I had stayed in Val d'Isere when I was here on my own on my tour of Europe, so I had a few cool wee places to show HB. We went for a beer in the place with the wooden motorbike outside then headed to Crepe Val's for a bite to eat. The last time I was at Crepe Val's the staff had been really friendy and the food was amazing. this time we had the same treatment. We stayed there all night just enjoying being on holiday. The owners of Crepe Val's chatted away to us as best we could with the language barrier sometimes muddling things up, before we left we tried some Genepi, a liqueur from the Savoy region of France (where Val d'Isere is) which was really good, sort of similar to absinthe but with a nicer, sweeter taste. Then it was back to the tent, tomorrow we'd be hitting the Alps for real! 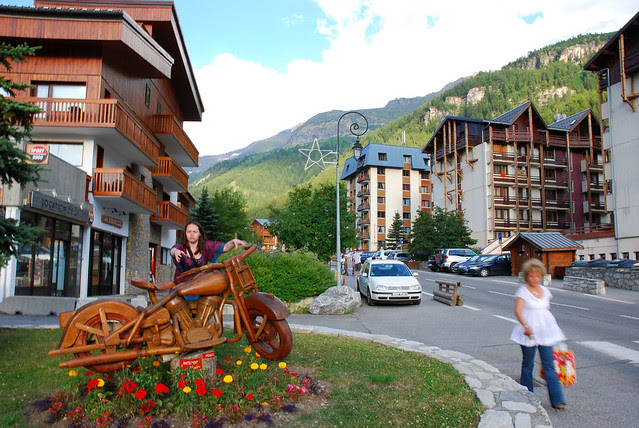 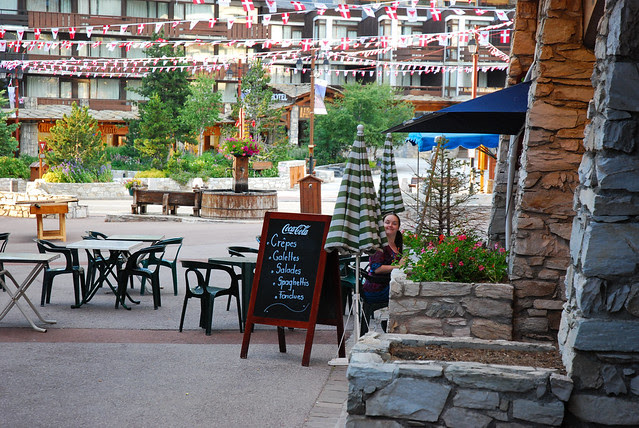 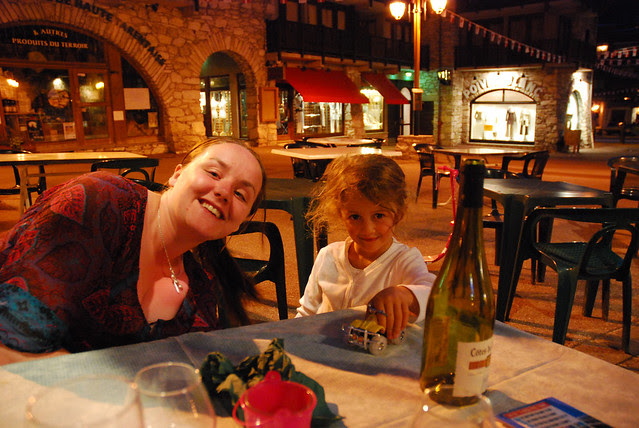 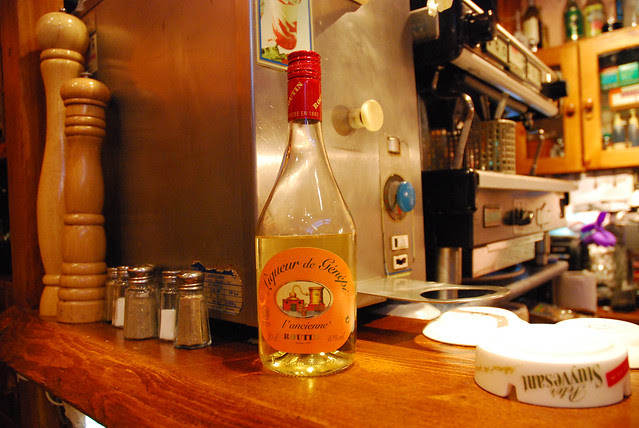 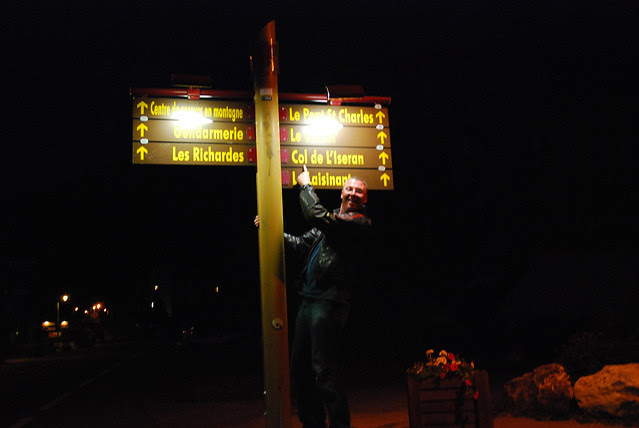 The only way out of Val d'Isere. Sweet. 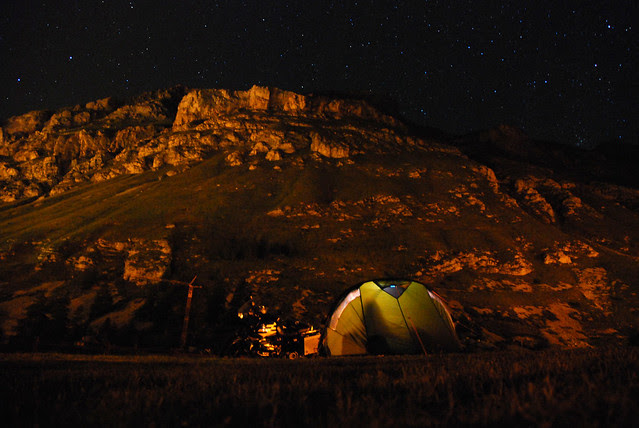