﻿﻿
It was my day off on Wednesday and after running a few errands for HB I had planned a wee cycle. Dave phoned saying that he'd like to come along but he couldn't make it out till 3, so I chucked the lights on charge and thundered a cheese and ham toastie (with home made spicy tomato sauce, ya dancer) in to my coupon. 3 o'clock came and out we went. We headed into the local woods while discussing a route we could go, I suggested heading up to Gifford via the path from Bolton, Dave reckoned it was a goer and off we went. We followed the river out of the woods at which point we had the choice to follow the main road or take the more adventurous route across and around some fields. The second option got the vote and we followed a landrover track down the side of a field. It was hard going when the track became muddy and overgrown, terrain that will be a piece of piss when I get my Pugsley rolling. Eventually we reached a barbed wire fence and chucked the bikes over into the next field, only to be confronted by the river. Shite. I should have recognised this field, I was there over a year ago (see this post) and got soaked attempting to cross it. This time there was no danger we would be attempting to cross it. After the heavy rain we'd been getting it was flowing fast and pretty high so we had to retrace our steps. Not wanting to shite out and take the safe road option, we summoned our inner Ranulph Fiennes and looked for an alternative route. With the river stopping us one way and a big spikey hedge stopping us another way it wasn't looking good, then I spotted a gap in the big spikey hedge with only a barbed wire fence and a small burn to cross on the other side. We chucked the bikes over and I jumped the wee burn before Dave passed the bikes over and we crossed into another field. All this and not a wet foot or a muddied arse in sight. We crossed into yet another field before being completely blocked by a ploughed and planted field. Our only option was to cycle up though the farm. It getting pretty dark and the farmer wasn't to impressed to see us. I think he shit himself a wee bit when I put my head torch on so he could see us coming. "Whit the hell are ye dooin here??" All this and we'd only travelled about three miles from my house. The farmer told us that there was no way through and we headed up to the main road to Bolton. I led the way to the track to Gifford, declaring Dave to be a blind bastard before I cycled into someones garden. Once Dave got us to the right track the slog began. The trail was really muddy, but we plugged away and eventually got to Gifford and the Goblin Ha' for a pint of Summer Lighting (cheers Dave.) The bar in the Goblin is great, its a proper village pub with some interesting regulars and has a wood burning stove warming your arse and drying your gear. It felt like it was around seven o'clock but when Dave checked his watch it was only five, bonus! We could have sat there all night but home, and Dave's wife, were calling. 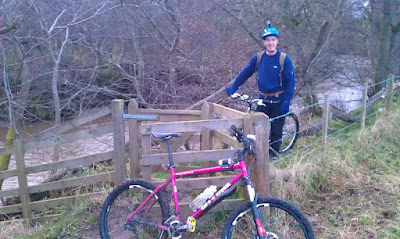 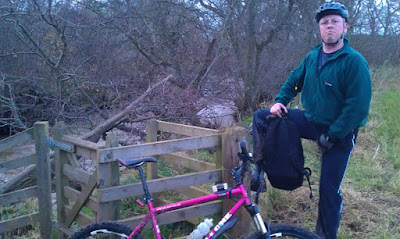 We'd got about two minutes up the road from the Goblin and it started to pish down. We had opted to take the roads home so we battered on. The elements tried to make it tougher for us by blasting us with a head wind but, like the aforementioned Fiennes, (except on bikes and full of beer) we soldered on. By the time we got home we were both fucked, soaking and starving.
When i got in the door it was straight in the shower before making a chicken curry for me and HB. I had a MASSIVE bowl of the stuff along with one and a half naan breads. I love that part of doing longer cycles, when I get home I'm ravenous. Dave must have been in the same state as later that evening I got the following e mail from him.

I've eaten the following since I got through the door.

Quarter of a mellon

Half an Iced Doughnut

Glass of milk
I've forgotten something as well. There was defo something else.

All that and I made it home for James Bond on the telly.

Quality.
Sorry about the quality of the photos. I only had my phone with me.
Posted by Mike at 12:44 AM