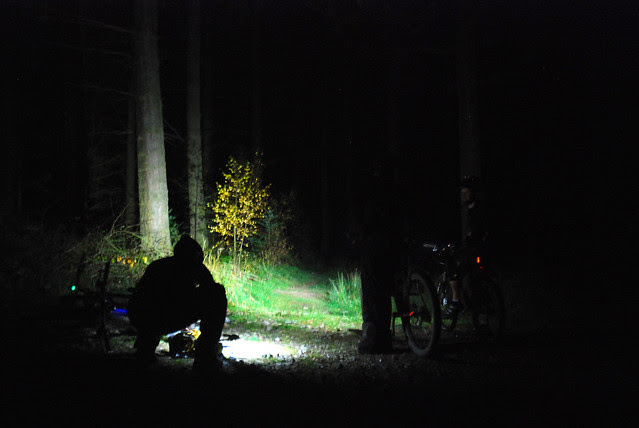 Andy, Bruce and Steven on tonight nightride. I'm fucking knackered now.
The clocks have changed here now, so its dark by around half five in the evening. Lucky for me I got a new light for the pushbike! I've still got my magicshite on my bars from last year, but now I have a light on my lid too. I got another light from deal extreme, a bargain for under £30 quid delivered. It makes a big difference having the extra light, especially on really twisty trails.
I've been out using it loads on the local trails. Andy, Steven, Bruce and myself went for a good cycle tonight. The pace was fucking mental (for me). I'm much fitter than I was but I still have a fair bit to go. My legs are going to be fucking sore tomorrow. Earlier in the week Bruce, Gary and I went for a wee halloween ride. Bruce made this wee film with his Gopro. It can get well spooky way up in the woods, especially when folk are putting the shits up you. Cheers guys. Here's Bruce's film. 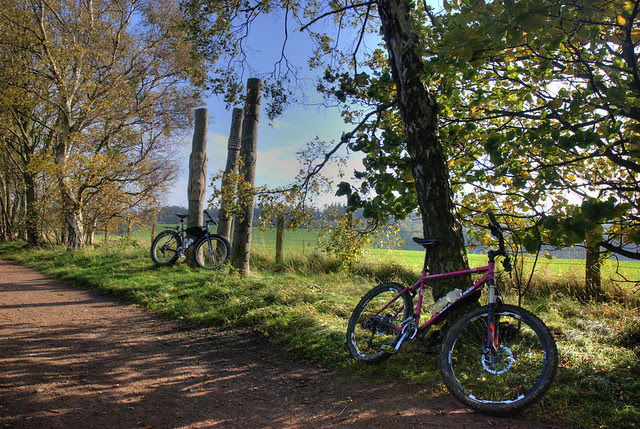 We've been out during the day too. Faithir and Roli the dug joined us on a wee cycle. I borrowed Bruce's gopro and chest mount to make a wee film. We both did different edits, here are the films.

Again, now its muddy as fuck, I'm sliding around all over the place in the mud with my dry tyres. I've still got a Conti Mountain King on the front, which worked fine but now its worn out. On the rear I've got a Michelin Dry 2. You can probably tell by the name that its a bit shit in the wet mud.
Sooooo. I've been looking at loads of different tyres. They have to be cheap, as in under twenty quid, and strong enough to take my large body smashing them into stuff. I had a mountain king on the rear but I pinch flatted it all the time then burst the sidewall. I've been browsing away like hell but on tonight's cycle Andy offered me a pair of Conti Rubber Queens so I'm going to give them a shot and see how it goes.
Now to find a chrimbo pressie for HB. Anyone got an opinion on the Kindle?
Posted by Mike at 11:08 PM